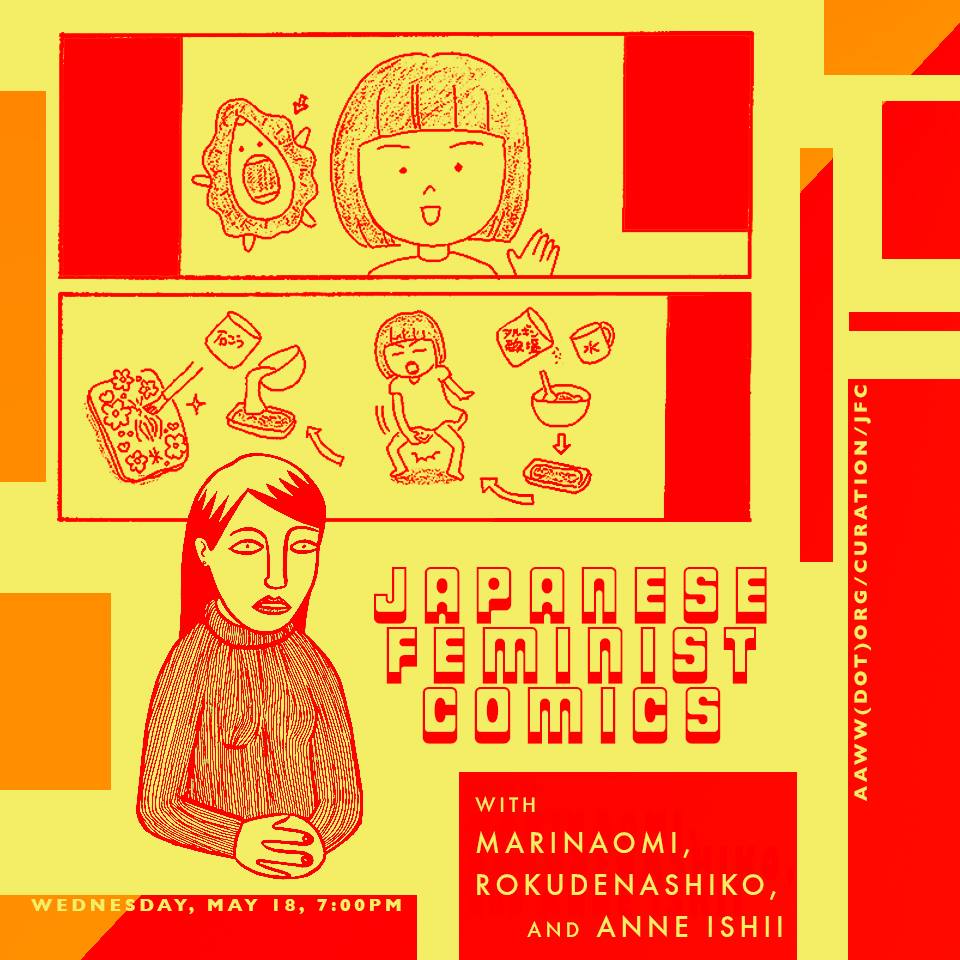 Come hear two storytellers who are working at the edge of gender, sexuality, and the visual arts: graphic novelist MariNaomi, whose critically acclaimed new comic memoir explores her time working at hostess bars in Tokyo, and Japanese sculptor/manga artist Rokudenashiko, who was arrested last year in Japan for “distribution of obscenity.” Her crime? Creating explicitly feminist art based on her own vulva. While Rokudenashiko is now free–and has been raved about by Jon Stewart, Margaret Cho, and Ai Weiwei–her trial is still pending. Hear MariNaomi and Rokudenashiko in conversation with Anne Ishii, AAWW Board Member and co-editor and translator of Rokudenashiko’s new book.

Visiting New York for a rare visit from Japan, Rokudenashiko is the creator of cute, manga-influenced work that happens to be based on her own vulva. In 2014, when she distributed images based on 3-D prints of her genitalia, Rokudenashiko was promptly arrested on charges of obscenity. After a petition garnered 21,000 signatures, she was released a week later, but her case is still pending, and she faces a sentence of up to two years. Her crime? Creating art that demystifies female genitalia. Rokudenashiko’s new comic memoir about her time in jail is titled What Is Obscenity? The Story of a Good For Nothing Artist and Her Pussy (Koyama Press 2016). (“Rokudenashiko” is a pseudonym that roughly translates to “good-for-nothing girl.”)  Margaret Cho writes: “Rokudenashiko is a one woman revolution. Her brilliance is profane yet innocent, which is a sign of true genius. I’m moved and laughing and crying and angry and overjoyed by her work. Her greatness is overwhelming and right on time.”

It’s 1995. MariNaomi is twenty-two and newly broken up in San Jose and what does she do? She falls in love and works in a hostess bar. MariNaomi’s new comic book memoir, Turning Japanese (2dcloud, 2016), chronicles her experiences as a hostess, first in San Jose and then in Tokyo, where she finds herself learning how to acclimate herself to the language and culture of Japan. Eisner Award-winning graphic novelist Jason Shiga calls the book, “The best comic about being Asian American in Japan. Like Fun Home and Persepolis, Turning Japanese is at once modest and grand. MariNaomi is a master of the small, intimate moments that build to a surprisingly emotional climax.” The creator and curator of the Cartoonists of Color Database and the Queer Cartoonists Database, MariNaomi wrote and drew the SPACE Prize-winning Kiss & Tell: A Romantic Resume, Ages 0 to 22 (Harper Perennial, 2011), the Eisner-nominated Dragon’s Breath and Other True Stories (2dcloud/Uncivilized Books, 2014), I Thought You Hated Me (Retrofit Comics, 2016), and her self-published Estrus Comics (1998 to 2009).

Joining them will be the translator and co-editor (with Graham Kolbeins) of Rokudenashiko’s book, Anne Ishii. She is an AAWW Board Member and co-editor of MASSIVE GOODS, a fashion brand, publisher, and creative agency representing queer and feminist artists from Japan. MASSIVE’s mission is to spread iconoclastic artwork addressing gender and sexuality to new audiences and new forms, from museum walls to bodies everywhere. Check out Anne in The Margins interviewing Jillian Tamaki, Michael DeForge, and comics publisher Annie Koyama.