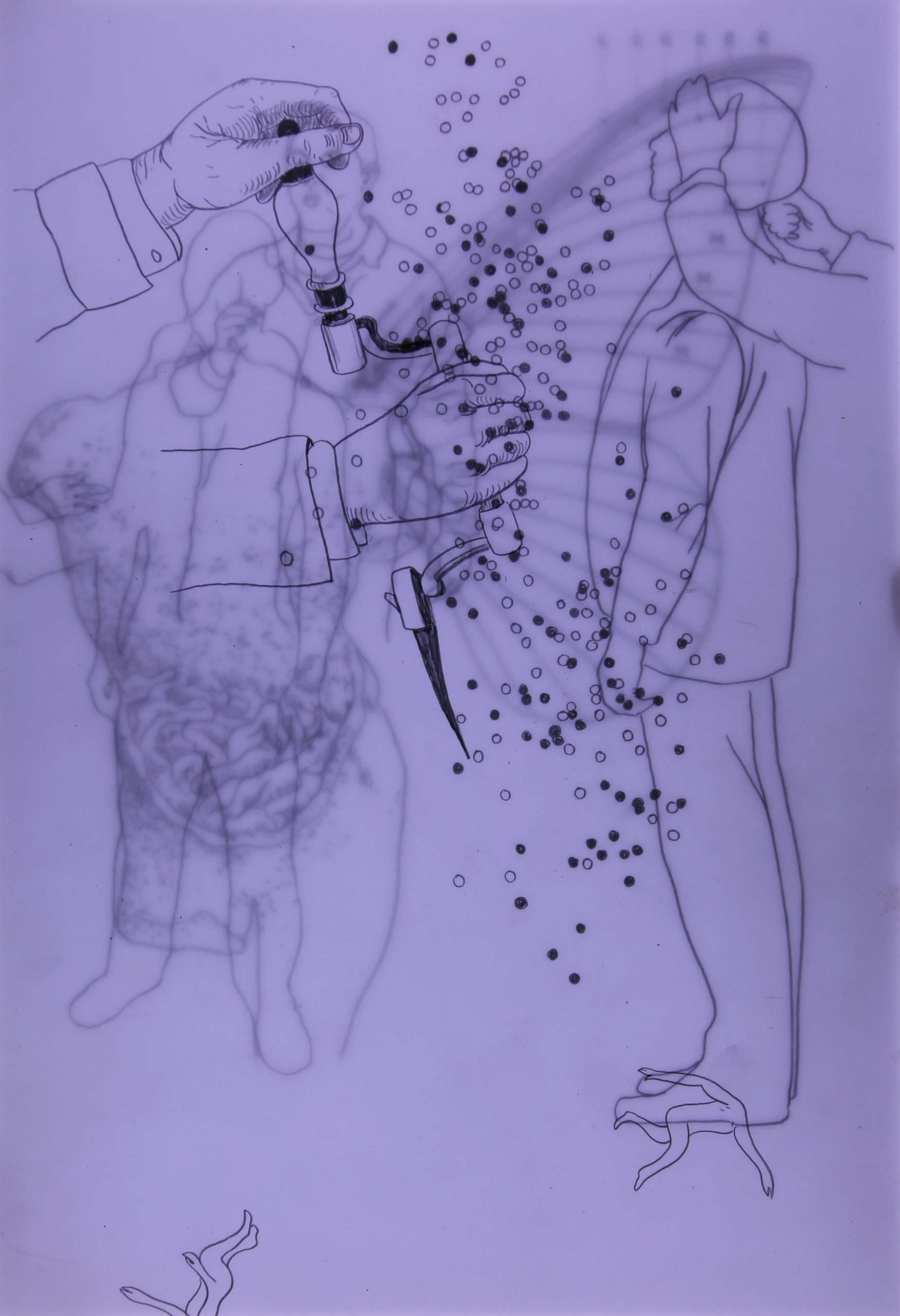 Editor’s Note: Today’s poem is part of a notebook of Lullabies published by the Transpacific Literary Project. Each piece of the notebook is paired with a pencil drawing by the artist Trương Công Tùng. Read the other Lullabies in this notebook here.

A House Built Inside a Piece of Bread

It’s time to kill the oil lamp. A mother relieves her children’s hunger with bread crumbs. They shut their eyes tight when the dogs outside howl. They want her to tell the story of the tortoise and the hare once more. But the children are frolicking inside the palace of their mother’s empty stomach. They can’t say whether it’s day or night.

The color of fire rains down in torrents. What color is the night? Hard to say especially when light is withdrawn from one’s seeing. Soft music pushes its way out of the wall. The maids fight for the leftovers which they hurriedly stuff into their bags. The last maid, happily carrying home a piece of bread, almost wants to compare the night with the jasmine. Outside the maid’s stomach lies a large golden palace. Such a gorgeous sight invites long wandering thoughts. Of course one might think it was daytime.

The maid’s way home is half-dark. The streets have swallowed the parijat flowers that willed themselves to the ground. Stones raise doubtful eyebrows and wait for something. The shadows on the ceiling are also half-dark. Nobody who leaves ever forgets the beguiling earth scent of this place. But they forget to speak of their longing.

The endlessness of the day finally breaks apart in front of a door with no number. Each tick of the clock grows older and its tock more bone-chilling. We just have to take this ride using all the gas we got left. The mango tree in front of the house bends towards the moon. Dreams seep out of the bread crumbs, stream into the gaps between the floor boards and disappear.

Shwe Poe Eain is a poet and short story writer based in Yangon. She has published two books of poetry and her poems have been anthologized in various poetry collections. She also writes radio programs for local stations.

Maung Day is a poet, artist, and translator from Myanmar/Burma. He has translated the works of Myanmar poets such as Aung Cheimt, Aidii, Han Lynn, Mae Yway, Moe Way, Nay Myo Sett Lu, and Eindra.

Jejak Tanah | Walk the Earth
They sit surrounded by items they have prepared for the ritual of Jejak Tanah: fine sand, peat soil, pea gravel, petals from seven kinds of flowers, a baby bathtub, and a large terrarium bowl

Out With Mom
I am careful with my words unless they are not in English, / am I not? (不好意識打擾各位可是我不想再禮貌了。) / My mother is careful with her words only when they are in English.