I started writing in order to make a place where I belonged in the world of novels and plays. That’s why I write for people who don’t belong. 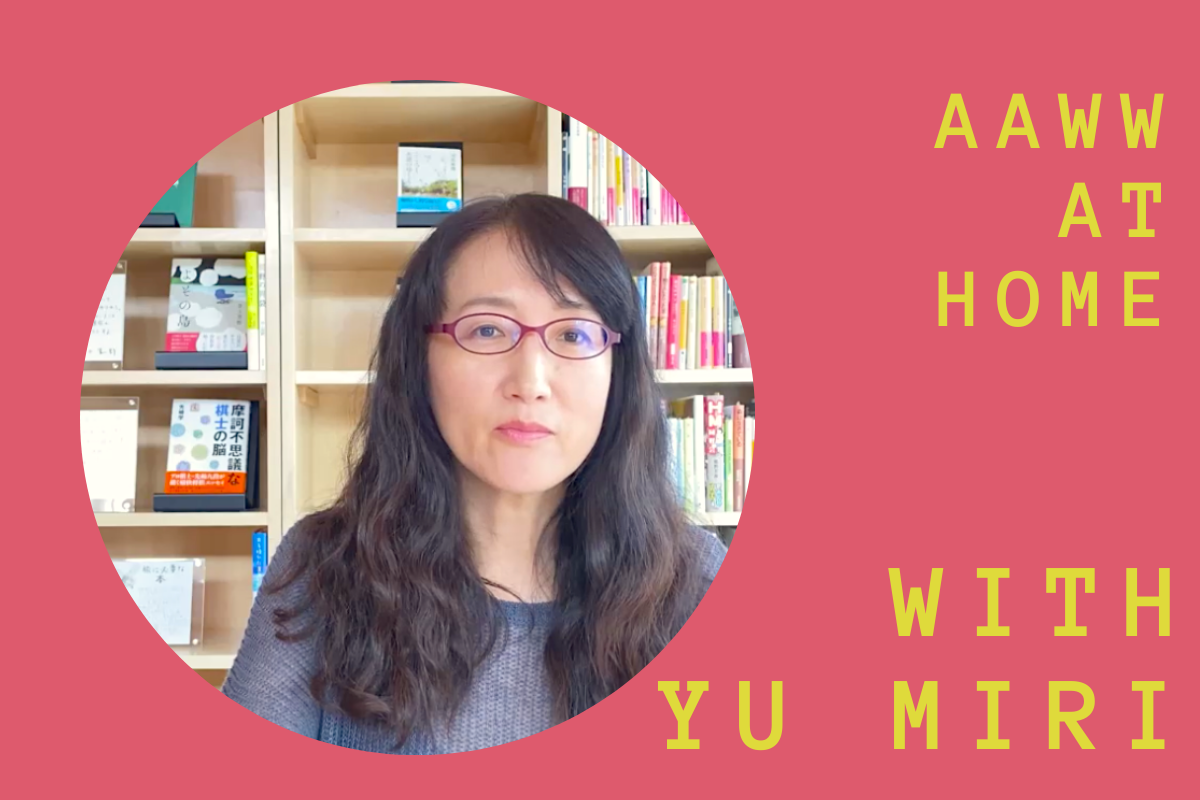 During the pandemic and wave of global uprising, AAWW at Home connects our readers to some of the writers we love most, from the comfort of their homes.

This week we hear from Zainichi Korean playwright, novelist, and essayist Yu Miri, who comes to us from her bookstore in Odaka (now part of Minami-Soma City), in Fukushima, Japan.

Yu Miri’s novel Toyko Ueno Station was published in the United States this summer from Riverhead Books. The writer Bryan Washington described the novel as “a dream: a chronicle of hope, loss, where we’ve been and where we’re going… The novel astounds, terrifies, and makes the unseen concrete–entirely tangible and perennially effervescent, right there on the page.”

With thanks for Morgan Giles, Yu Miri’s translator, who provided a translation of this video. You can read a full transcript of Yu Miri’s video below.

Hello, I’m novelist Yu Miri. I’m a second generation Zainichi Korean. My mother and father came to Japan during the Korean War to escape the war on a small ocean-going boats. I was born in Japan and raise here and I think about thing in Japanese. I read and write in Japanese. I live my life in Japanese.

Right now I’m in Japan, in Fukushima Prefecture, Minami-Soma City in a place called Odaka. On March 11, 2011, a giant earthquake happened. Soon after the station in Odaka–it’s only about three minutes from here–the tsunami came and it hit. Many people died. And this area is only 15 kilometers from the TEPLCO’s Fukushima Da-ichi nuclear plant. After the nuclear accident the 20 kilometer radius around it was designated and exclusion zone and people were restricted from entering. This town was within that area so the whole town was closed off. Before the disaster, Odaka had a population of 13,000 people but currently only 3,700 have returned.

So now I live in this area running a bookstore called Full House. It’s a bookstore and cafe. And right now I’m in the bookstore by my house is in the back so I live here and run this bookstore for the local people.

I’m often asked, why would you move where there was a nuclear accident on purpose? I started writing novels when I was eighteen years old, and since then, in interivews, I’m always asked, “Why do you write? Who are writing for?” And I always answer, “I write for the people who don’t belong anywhere.” That might have roots in the fact, in the Korean War, my family left Korea and came to Japan, that my family has wandered from place to place, that I was expelled from school, so I come from a place of not belonging, and perhaps I started writing in order to make a place where I belonged in the world of novels and plays. That’s why I write for people who don’t belong. So in 2011 there was the nuclear accident and one day, all of a sudden, people had to leave the towns they lived in and the houses they grew up in, many of them born and raised here in Fukushima, so I… I’m not sure how to say this. I couldn’t do nothing, so one month after the nuclear accident, I started to get involved with this region.

I’m going to read a little from Tokyo Ueno Station, which has just been published in America this year. The protagonist of this novel is someone who very much doesn’t belong anywhere. Here’s a homeless man, living in Ueno Park. Japan is known throughout the world as a rich country, but I wrote this novel about the problems of poverty and discrimination that exist here. I’ll read the last scene now.

Suddenly, my eyes filled with tears. I strained all the muscles in my face to stop them from falling, but my shoulders began shaking with each breath, and I hid my face in my hands.

Behind me I heard the sound of someone dragging their feet. I turned and saw a homeless man, dressed in a coat which was too long and walking on the backs of his shoes like they were slippers. Another pushed a cart full of luggage covered with a blue tarp, his umbrella dangling from one hand.

I saw the police get into a patrol car and leave the park.

The exile was over.

I could smell the rain now. The smell of rain was stronger just after it had stopped. All of Tokyo is covered in asphalt, but in the park, there are trees, earth, grass and fallen leaves, and the rain brought out their fragrances.

In my thirties, I did overtime every night. As I walked to the station I’d be overcome by the waves of salarymen on their way back from work and I’d wonder if they had families waiting for them at home, and on nights after it rained, I walked in my muddy boots over the wet asphalt, shimmering with reflections of neon signs, and then I could smell the rain—

Some sunlight pierced through the clouds to the west, but to the east, the sky was still so heavy with rain clouds that it looked like it might start again at any moment.

I heard a burbling sound and I looked toward the Tokyo Culture Hall, but I couldn’t tell whether it was water coming out of the gutters or circulating inside the air conditioning system. With my head turned toward the sky, breathing in the smell of rain, and listening to the sound of water, I realized exactly what I was going to do next, like a moment of enlightenment. I’d never used the word ‘enlightenment’ before. I was not getting caught up in something and going along with it, nor was I running away from anything, as if I were a sail allowing itself to be pushed along by the prevailing wind—suddenly, I didn’t care anymore about the cold or my headache.

The yellow of the ginkgo leaves poured into my eyes like paint dissolving into water. Each leaf had a golden glow that was almost too beautiful—the ones that danced in the air, the soggy ones trampled on by people, and the ones that still clung to their branches.

Since I became homeless my only interest in ginkgoes had been the fruit. Wearing plastic gloves, I picked them up one by one and put them in a plastic bag. When it was full, I took them to the water fountain and washed off the part of the skin that stank. Then, I would spread them out on a newspaper to dry, before taking them to Ameyoko Market, where I could get 700 yen a kilo for them.

My vision was filled with yellow leaves, whirling in the cold winter wind. The turning of the seasons no longer had anything to do with me—but still, I didn’t want to take my eyes away from that yellow, which seemed to me like a messenger of light.

The chirp of the signal for the visually impaired was what made me realize that the light had turned green.

I crossed the road.

I took some change out of my pocket and bought a ticket.

I passed through the gates at the park entrance of Ueno Station.

A sign with the words, “North-Eastern Shinkansen Service—Shin-Aomori bound” came into view, and suddenly I thought, if I took that train I’d be at Kashima station in four and a half hours—but this hesitation lasted only a beat. The feeling of homesickness no longer made my heart pound or my chest tighten.

A number of paths were now behind me.

Only one way was left before me.

Whether it was the way home or not, I wouldn’t know until I tried.

I took the stairs down to Platform 2, the inner loop of the Yamanote Line.

A woman almost ran into me on the stairs. A petite woman in her thirties wearing a red coat with a shiny bob like a little girl… She was coming up the stairs, looking at her phone, and just before we collided she looked up. “Oh, sorry,” she said, her face pale and lifeless.

In the flash of surprise that registered on her face for a moment as she realized I was homeless, I saw a shadow, as if all of her dreams had just been crushed. I stopped and turned around near the bottom of the stairs, just in time to see her red coat disappear. Now she wouldn’t witness anything, I thought, and felt a little better. I wondered if she’d just got some bad news on her phone, but most likely she’d sleep well tonight, and in the morning she’d wash her face, have something to eat, do her makeup, get dressed and leave her house. And her life would continue. The calendar separates today from yesterday and tomorrow, but in life there is no distinguishing past, present and future. We all have an enormity of time, too big for one person to deal with, and we live, and we die—

I watched one train go past, down the inner loop of the Yamanote Line. In the three minutes until the next train arrived, I bought a carbonated drink from a vending machine and took only two gulps before putting it in the bin.

“The train now approaching on Platform 2 is the Ikebukuro and Shinjuku-bound Yamanote Line train. Please stand behind the yellow line.”

I stood on the yellow line and closed my eyes, leaning my whole body into the rumbling sound of the approaching train.

My heart pulsated, as screams tore through my body.

Yu Miri is a writer of plays, prose fiction, and essays, with over twenty books to her name. She received Japan’s most prestigious literary award, the Akutagawa, and her bestselling memoir was made into a movie. After the 2011 earthquake and tsunami in Fukushima, she began to visit the affected area, hosting a radio show to listen to survivor’s stories. She relocated to Fukushima in 2015 and has opened a bookstore and theatre space to continue her cultural work in collaboration with those affected by the disaster.

Morgan Giles is a Japanese translator and reviewer. She lives in London. 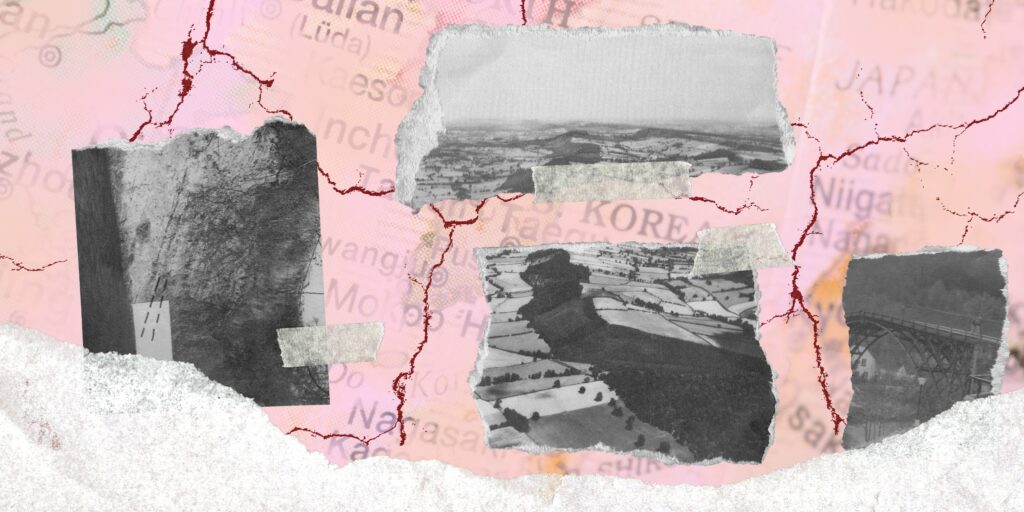