Growing up in Richmond Hill, one of my most vivid memories, is of a steady stream of affable and hungry guests walking through our front door. No matter the number of rumbling stomachs, my grandmother’s pot seemed bottomless. But, after a week of clapping hot roti every night, of taking the steaming doughy discs off the hot cast iron tawah, and placing them between her hands to clap the air out, Gramma needed a little rest.

On these Saturdays, she would call out to me from the kitchen: “Nad, go with your mommy and pick up some hot dhalpuri and doubles.”

Dhalpuri is a type of Caribbean flatbread filled with seasoned ground split peas. Doubles, another weekend treat, are tiny meals unto themselves. My uncles ate them standing, slightly hunched over, doubles (spicy chickpeas sandwiched between two fluffy layers of bara) in one hand, wax paper or paper plate in the other—the definition of cool in my child’s mind. I learned from them that eating doubles requires dexterity, caution, and quickness. The entire contents can spill out if not held at the correct angle, causing burns and an empty stomach.

My uncles ate them while standing, slightly hunched over, doubles in one hand, wax paper or paper plate in the other—the definition of cool in my child’s mind.

On these Saturday excursions, the hunt for dhalpuri and doubles began by choosing a roti shop where they were sold. Often it came down to where my mom could park the car on bustling Liberty Avenue. At the door of the shop, my mom’s eyes lit up as she scanned the items tucked away on the store’s shelves or behind refrigerated glass doors: bottles of mauby, boxes of peanut punch, glass bottles of cream soda—all with labels familiar from her childhood. While she had her moment of nostalgic reverie, my eyes went straight to the workers, whose quick hands were busy preparing doubles.

It seemed a magical process. One order of doubles was ready in less than a minute.

“One doubles with slight pepper. One with heavy tamarind. One plain. How fresh is the dhalpuri?”

From behind the fogged up looking glass covering the hot food laid out buffet style (the fried rice, the macaroni pie, the dhal, the badji (or callaloo leaves), the saltfish) I could watch the server’s hands as my mom made her list. I was mesmerized. Swift and fluid, the channa flying from spoon to bara in an almost acrobatic arch. Different condiments were added in quick succession and with a flick of the wrist: tamarind, pepper sauce, mango, shado beni, cucumber.

The genius of doubles lies in its simplicity—the main ingredients are flour and chickpeas. The mild flavor of the bara, another type of flat fried bread made with lentil flour, provides a solid culinary canvas to experiment with spices and condiments. Wrapped in wax paper, the two soft layers of bara holding a spicy channa (chickpeas) mixture, would sweat through to the brown paper bag making it soggy. The entire contents would then be packed up in a nondescript plastic bag, beads of sweat from the heat adorned the inside like pearls.

Roti shops catered not only to newly arrived Guyanese, but to other migrants from all over the Caribbean.

As often as I’ve unwrapped doubles at Gramma’s house, I never knew exactly where they came from. It’s not a Guyanese dish, but became popular abroad with this community. My dad tells me that when he was growing up in Guyana the bara and channa were eaten separately.

Singh’s Roti Shop, one of the first in Richmond Hill, opened its doors in 1990. At this time, between 10,000 and 30,000 people were leaving Guyana annually. Roti shops catered not only to these newly arrived Guyanese, but to other migrants from all over the Caribbean. Food cultures mingled side by side and eventually merged. Doubles were a street food tradition hailing from Trinidad and Tobago, where they are a popular on the go snack.

And why not? It is the perfect quick meal: hot, superb for hangovers, easy to make, easy to hold, and easy to customize. The bara and channa combination is descended from a Punjabi dish called chole bhature. Food lore goes that doubles originated in Trinidad by a food seller named Mamudeen. According to an article written by Seeta Persad for Trinidad and Tobago Newsday, Emamoul Deen and Rasulan Deen began selling fried channa and curried channa in 1936 in Fairfield Princes Town. After selling spicy channa in cone-shaped containers with one piece of bara, his customers told him to “double” the layer of bara, and so then it was known simply as ‘doubles’.

Even having grown up making these doubles and dhalpuri runs in Richmond Hill, there are some establishments I have never set foot in. Places like Tropical Isle Roti Shop on the corner of Lefferts Boulevard and Liberty Avenue where food, drink, and gyaffing are abundant.

We does come get we food and drink and gyaff,” Lincoln says. Food, drink, and gyaffing. In these three words lie the appeal of the roti shop. To gyaff is the Guyanese-Creole English equivalent of chatting, storytelling, gossiping. Sometimes the good gyaff session is sobering and laced with sad stories of a past that continues to bob its head in the waters of the present. At Tropical Isle Roti Shop, Baby, an older aunty who politely declined to give me her real name and age, started to gyaff with me before I even sat down at her table.

Sometimes the good gyaff session is sobering and laced with sad stories of a past that continues to bob its head in the waters of the present.

“My name is Baby. When I was small my parents only call me Baby. It’s my pet name,” she tells me as ribbons of steam emanate from her plate of hot food. The staff seem to know her well and call her Old Gyal, but when I ask if she’s a regular she says this is her first time eating at Tropical. Baby’s plate of dhal and rice with badji looks appetizing and I tell her so. “If people want veggies, want meat, it’s here. All ting man. But me, I prefer my home food. I don’t eat outside food too often,” she clarifies.

She paints a portrait of growing up without a mother from birth and being married off too young to an abusive husband—she gives me her life story in a few sentences—all before settling into a seat looking out onto Liberty Avenue.

My next stop is Trini-Gyul Roti Shop. The shop’s storefront bright with a pink flamingo lures me in.

“Actually we living here. We does come here everyday. Run the camera back a whole week and you going to see we here,” Parsdeo, also known as Blacks, tells me at the back of Trini-Gyul near the corner of 112th Street and Liberty Avenue. Parsdeo and his friend Lincoln are devoted patrons of this place. They finish each other’s sentences and move easily through the roti shop as if it is their own kitchen or living room.

She gives me her life story in a few sentences—all before settling into a seat looking out onto Liberty Avenue.

Walking into Trini-Gyul is like walking into a party. “Love the people, love working, love my job,” Nikki, a waitress at the restaurant tells me. It is not yet five o’clock in the evening, but the place is busy. The atmosphere is jovial and the music alternates between high energy soca songs and reggae. Rick, the owner, and his girlfriend, Anna, fill me in on the business, the regulars, and why they decided to move the family business from Crown Heights in Brooklyn to Liberty Avenue in 2012.

Roti shops are trap doors back home. Treasure troves filled with the stuff of previous lives, the smells and tastes of things left behind.

On Liberty Avenue, the street is populated with them in the same way avenues in Manhattan boast Starbucks coffee shops and pizza parlors. Many spots have been around for years. The newer ones survive despite the sheer number of shops selling the same items.

“We have plenty of customers coming from Brooklyn. We had one customer who came and bought 20 rotis and shipped them off to California. She freezes it and ships it out to her family,” Anna told me. Roti shops are trap doors back home. Treasure troves filled with the stuff of previous lives, the smells and tastes of things left behind. Hot roti, sugar cakes, cheese rolls, pine tarts, tamarind balls, fudge, and coconut buns.

At Trini-Gyul my conversation with Rick, Anna, Parsdeo, and Lincoln turns to doubles and voices begin to overlap.

But it is doubles that come to mind for me when I think of a roti shop. At Trini-Gyul my conversation with Rick, Anna, Parsdeo, and Lincoln turns to doubles and voices begin to overlap. “This is the best doubles,” Lincoln and Parsdeo say in near unison. “100% best doubles in Queens. The quality. The taste. Every roti shop we eat in Queens. For 20 years we in Queens. I mean, we know. And his brother came in January. He said these doubles will give any doubles man competition in Trinidad. Most of the time I eat my doubles with everything. Some people like it with pepper or without pepper. They have a lot of different spices—” Lincoln tells me before Rick interjects: “We have mango, coconut, cucumber, chutney.”

“You don’t need nothing. Doubles are just channa and bara—” Parsdeo starts.

“I like it like that, to eat it just like that, plain. Taste so good you don’t need to add any extra ingredient. Any time you can have it and you’re good to go. Trust me,” adds Lincoln.

Many of the neighborhood’s roti shops are located just steps from the A train. For many in Richmond Hill, gyaffing and hot doubles can remedy anything the MTA throws at them. Commuters hustle off the trains in droves and many run in to the closest spot. They get something to go or sit down and enjoy a few minutes of hot food and that special community feeling that is the vital ingredient of every great roti shop.

Nadia Misir was a 2015 Open City fellow who covered Richmond Hill, Queens. She was then a a graduate student in American Studies. Follow her @nuancednadia. 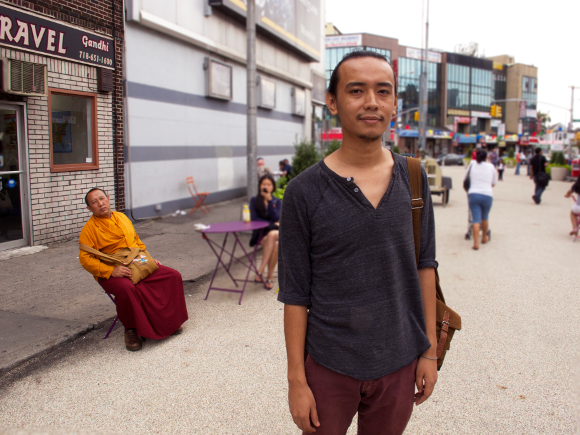 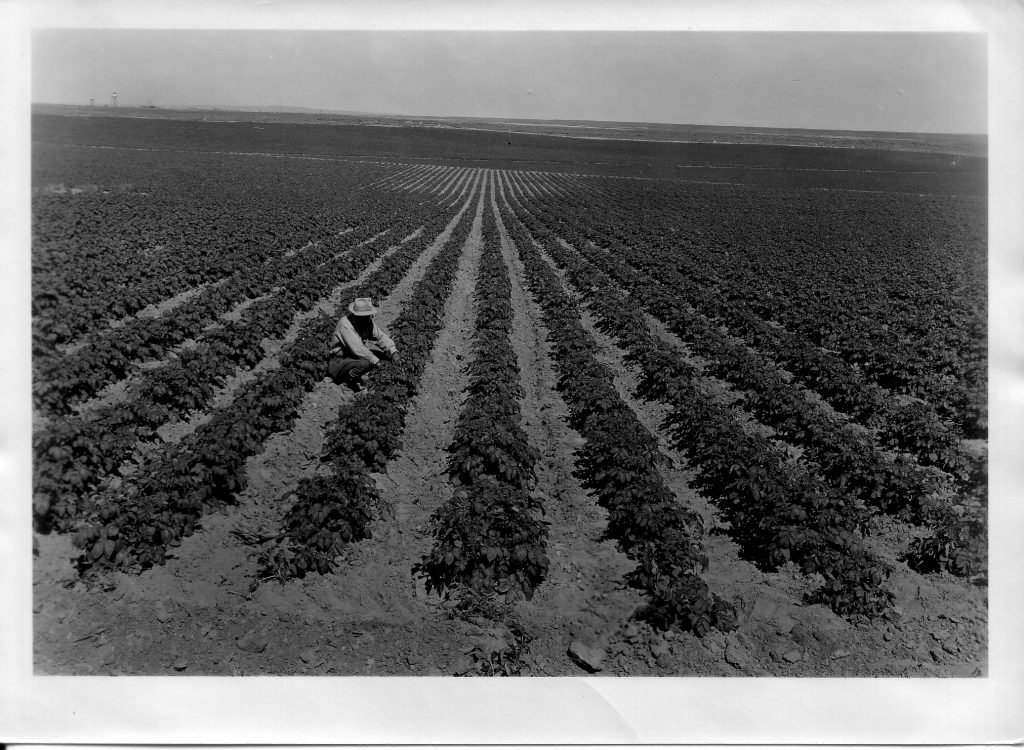 The Soybean Years
For some of us, a food is not something we can so easily cast aside before finding a new fad to follow.