He was happy and lost his spark.
Yeah.

Classic.
Totally. And I was taking photos at the time. I was more of a photographer than a writer, though he loved my writing. So he just thought I would be like—

One-man band.
Yeah, the beat reporter for him. And I recognized it instantly when I started—every time he read my review he’d go like “How would you like to get drinks and talk to me about possibly being a reviewer for Stereogum?” I was like, “That sounds amazing.” And I instantly knew in my gut that this was actually the thing that [I] was gonna do.

Common route type thing, yeah.
And I love that about the job. Not that my MO with the site is to cozy up to the people I write about necessarily, but the idea that it brings an influx of amazingly creative people into my life and orbit—that’s what I love about New York, that’s what I love about life. That said, I don’t know what happens for me next. I would love to get back to playing music, but I don’t see that happening anytime soon. For the last year, every spare instant I’ve had has been devoted towards making Dosa Hunt good.

Let’s talk a little bit about Dosa Hunt. What month was that that we filmed?
I could tell you the month and the day (laughs). August 25, 2011. So over a year.

I remember that day it was raining, initially.

It was raining initially, and by the end of the day, the sun came out. Happy ending. We were trying to meet up with the Dosa Man, and I spoke to him on the phone, which did not make the cut. But we did not get to hang out with him, because like you said, it was raining.

He definitely is.
(Laughs.) Until we came along.

What’re you doing after this crazy year? I know you were busting your ass at that midtown studio. Do you wanna take on another one of these projects? Maybe soon?
I would love to. I don’t know if soon is right, because honestly I need to just decompress for a minute. I need to just go back to working my other job.

What would you do differently? Bring more cameras and mics?
I’ve thought about that. And I would, but it would’ve been a very different thing had we done that.

Change the tone.
I think that one of the reasons why this works is that there was an ownership that we felt over the day, and that was part by design, and part just by nature of the day. You know, there was never me dictating the terms aside from, “This is the basic game plan.” And you know, going to Patel Brothers—that was a very spontaneous decision. That’s an amazing second act to the film, and it really grounds something about the food and also our relationship to each other there. And people started to like—I mean in the beginning everyone was like “What the fuck are we doing?”

Right. But then we were in full swing. I remember the jokes were flying at that point.
And that’s the beauty of it too, ‘cause you really feel that. Like you said, it was raining at the beginning of that day. And at the end, there’s this ray of sunshine that comes directly to the camera as Rostam was like—“Look at that, it became a beautiful day.”

(Laughs.)
And again, if we were actually scripting it, we’d be like, we need to tone that down, but that’s actually the way that the day transpired. Yes, I would like to do another project like this. And I have some ideas for some sorts of documentaries that are still talking about culture and identity, but not necessarily the specific sort of culture and identity that is implicated by dosa. Like, stuff that’s a little less about our mutual amount of skin pigment.

Yeah.
And the production—I think that if there were more cameras and microphones and stuff that day, it would’ve changed the way we all felt in it as subjects. 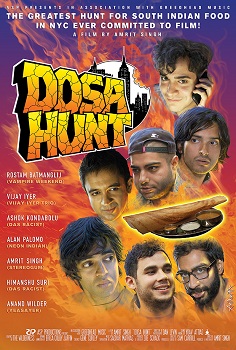 Oh, all those tattoos?
Every single one. And each time—I’ve been going for years now, about six or seven years—

Are your parents cool with tattoos?
My mom sent me to him. She found him online and told me, “You should check him out.” He was in the East Village at the time and I was too. He’s incredible man, he just knows everything about everything and has a very inquisitive soul. The only perfect replicas that he does are replicas of masterworks of art on an incredibly small scale. So he’s in Ripley’s Believe It or Not! book of incredible geniuses—

Oh wow.
Mona Lisa the size of two quarters stacked on top of each other. But otherwise, everything else is purely original.

Kokopelli on my head—
(Laughs.) Totally, but you know, he did all sorts of stuff for Pharrell and others. He’s got this really hilarious clientele that he doesn’t really talk about, super clientele, but it’s fucking incredible.

Oh, shit.
Yeah, so he’s a real G and, at least my process with him is that he asks you to submit a written statement, and then two weeks later or whenever you see him, you go in and talk about it. Usually that is an hour long conversation (at least it has been for me), where he really puts your idea through the crucible. His waiting list is like months and months long and he is extraordinarily expensive, but he’s worth every penny. ‘Cause by the time you walk out of that conversation, your idea is refined to a super essence. He designs it based on these more abstract ideas? You don’t have to have a particularly visual idea in mind, and he would design your idea.

Woah that’s cool.
It’s really beautiful. And so when I thought about getting artwork done for Dosa Hunt—this is the perfect man to do it. And I talked to him about it, and he’s just like, “Man, you don’t even know who you’re asking.”  And I was like, “I mean, I do know who I’m asking.” And he’s like, “No, what I mean is, I grew up painting Bollywood billboards and making Bollywood logos with my father whose name is C. Mohan, you should look him up.” I looked him up, and this dude has done every amazing Bollywood film imaginable from the ’70s to the ’90s. So he’s this iconic Bollywood designer. And he’s done Sholay and many other films, and our logo is sort of alluding—I probably shouldn’t say that for legal reasons—but it’s very much like his dad did Sholay, and this Dosa Hunt logo is very much an homage to Sholay. So it’s also an homage to his dad’s work, which is just so fucking amazing.

Mindblowing levels, yeah.
So even Sholay meaning flames—on poster, it incorporates that too. Sholay is in Bollywood a rendition of the Magnificent Seven; there’s seven of us in Dosa Hunt. I’ve had too much time to think about this shit (laughs), but that’s the idea.

What do you think you’re gonna try to do with the film afterwards? You’re just gonna make the festivals, that kind of thing?
Yeah, there’s definitely festival interest. And I’ve worked really hard to make sure that we all have release forms signed, all the labels have given us rights to do what we want with the film, and we can really do what we want. It’s a long short. So it’s like 20 minutes, which doesn’t make it particularly lucrative commercially from a distribution standpoint. The fact that it’s 20-some-odd minutes as opposed to 15 minutes means that most film festivals won’t want to touch it, because they want something around 10 or 15 minutes, so that they can screen more films. And that’s fine.

Do you have any ideas for a good closing interview question?
What do you think is the most beautiful thing in the world, but you gotta answer it.

I think it’s that weird, chemically-induced, altered mindscape of dreaming, where even if you’re doing a mundane thing, you wake up for a minute and are completely affected in a way that’s impossible to describe because it’s chemically-induced. Words are very limited. On the spot, I’m gonna say that.
Sweet. I’ll take that. And I’m gonna say, an honest and revealing conversation between kindred spirits.

Mountain Brothers: Winning Voices
"Since their submission was purely auditory, no one at Sprite realized they were Asian American."

Ashok and Sheng Take Cover
In the first installment of his interview column, "The Cornering," Ashok Kondabolu of Das Racist chats it up with Comedy Central comedian Sheng Wang. They also traipse the streets of Chinatown. Look out for part deux of this interview next week. 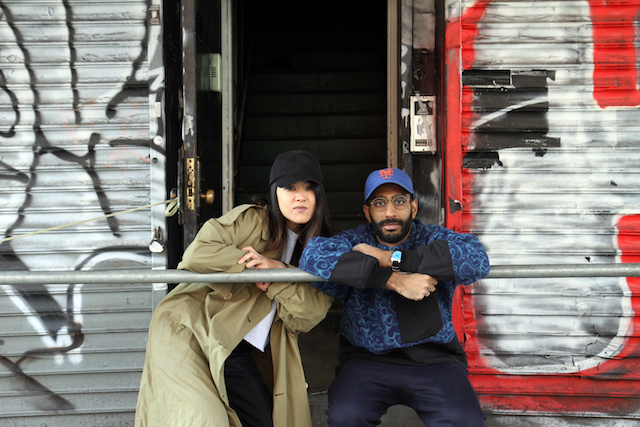 Ashok and Miho Get Optimistic
Ashok speaks to Miho Hatori of Cibo Matto about her new creative endeavors, Tokyo versus New York, and what gets lost in translation.