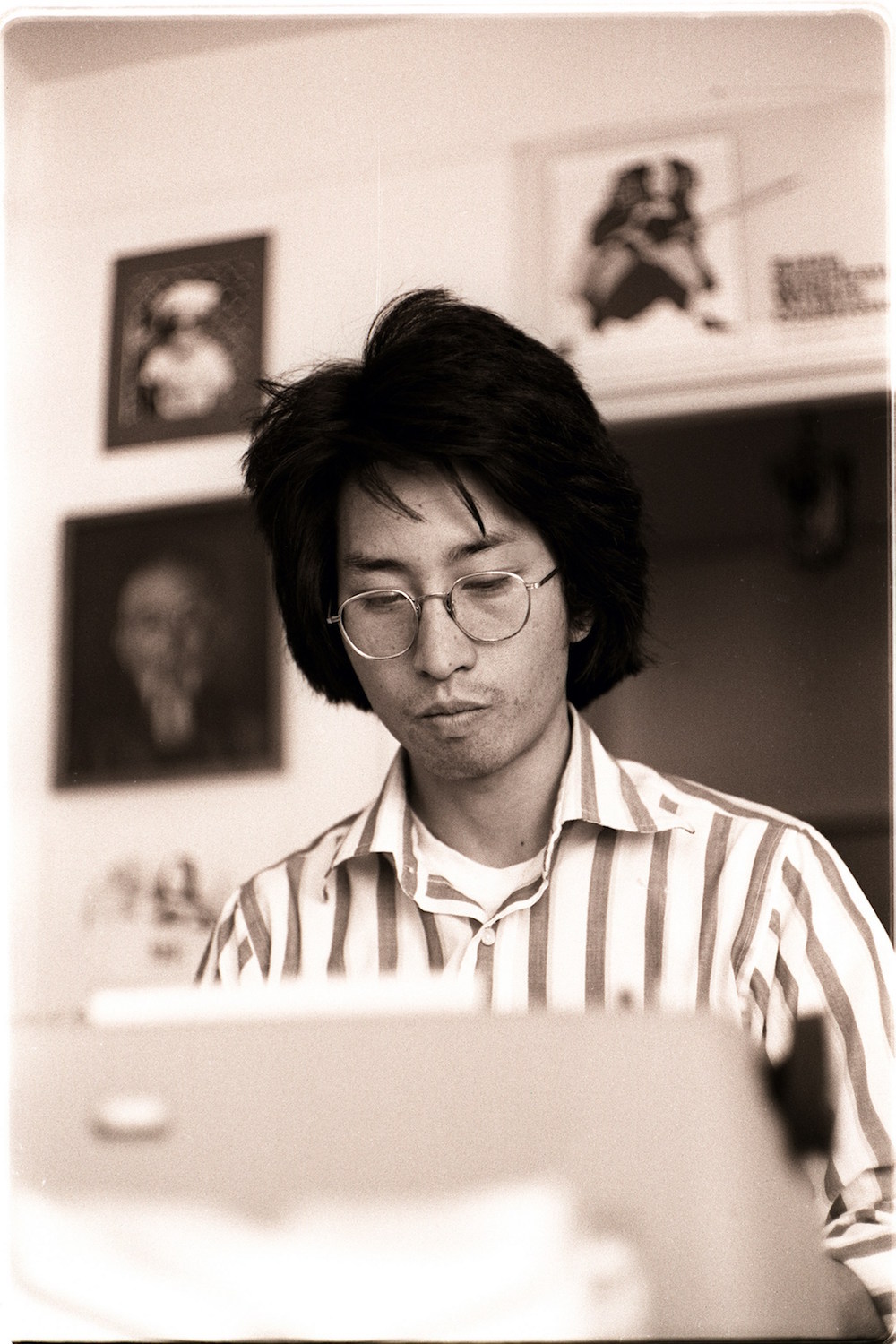 Photo by Nancy Wong
The author, Shawn Wong, in his San Francisco apartment in 1975. The images over his head include a poster from the First Asian American Writers' Conference at the Oakland Museum.
Essays | Aiiieeeee!, Combined Asian American Resources Project, John Okada, No-No Boy
November 21, 2019

Editor’s note: This is one of several essays on The Margins exploring the legacy of John Okada’s 1957 novel No-No Boy. Read the others here.

In the spring of 2020, the University of Washington Press will reissue Louis Chu’s classic 1961 Chinese American novel Eat a Bowl of Tea, which captures the essence and spirit of New York’s Chinatown bachelor society post-WWII. The most recent edition of Eat a Bowl of Tea had been published by Lyle Stuart in the 1980s and has been out of print for many years. This new edition, with a new introduction by novelist Fae Myenne Ng, will mark the beginning of the “Shawn Wong Book” series, a collaboration and partnership I am spearheading with the University of Washington Press that extends our collective commitment to preserve and promote Asian American literature. For me it represents 50 years of both educating an audience to Asian American literature and promoting the work of forgotten Asian American writing that I began to read and rediscover in the late 1960s and early 70s.

When I was a young writer, I recognized the importance of bringing attention to earlier generations of writers whose works lived in obscurity or were largely forgotten–writers like Toshio Mori, John Okada, Hisaye Yamamoto, and even the anonymous Chinese immigrant writers who carved poems into the walls of the Angel Island Immigration Detention Station between 1910 and 1940. Our rediscovery of these writers led Jeffery Chan, Frank Chin, Lawson Inada and me to co-edit Aiiieeeee! An Anthology of Asian American Writers, which was published by Howard University Press in 1974. This fall, to commemorate the 45th anniversary of the anthology, the University of Washington Press has released a 3rd edition of Aiiieeeee!, featuring a new foreword by Professor Tara Fickle alongside introductions from previous editions of the anthology. Professor Fickle will also launch a website featuring a treasure trove of archival materials gathered during the compilation of Aiiieeeee!, including letters between the four co-editors and with authors, interviews, rejection letters and editorial comments from the publishers who turned down Aiiieeeee! prior to its acceptance by Howard University Press, and related material from the files of the Combined Asian American Resources Project (CARP), an organization founded by the four editors of Aiiieeeee! In addition to these literary archives, we will be releasing documents and photos of the very first Asian American writers conference organized by CARP and held at The Oakland Museum in 1975.

All of that history brings me to John Okada’s No-No Boy, which the editors of Aiiieeeee! stumbled upon in a used bookstore in San Francisco in 1970 and bought for 50 cents. That edition had been published in 1957 by Charles Tuttle Co. and was one of only 1,500 copies printed. Okada’s novel told the story of a young man, Ichiro, who returns to Seattle after two years in a Japanese American incarceration camp and two subsequent years in prison where he was held for refusing to volunteer for the draft and to pledge his loyalty to a country that violated his constitutional rights as an American citizen. When he returns home to Seattle, Ichiro is ostracized by nearly everyone, both within the Japanese American community and outside the Japanese American community. The novel struck a chord in my search for Asian American writing—it told the truth about a hidden part of Asian American history and it was relevant to what was going on in the world around me as a young undergraduate at Berkeley, namely the Civil Rights movement and the anti-war protests against the Vietnam War. At the time, there were no Asian American literature classes offered at Berkeley, no professor even mentioned the name of an Asian American writer, nor did they have knowledge of any American writer of Asian ancestry. We were not hard to find—it’s not as if we were hiding. By 1970, that first edition of No-No Boy was still in print, which meant very few people had read the book. My coeditors and I wanted the book to have a larger audience.

Following the publication of Aiiieeeee!, we went to work trying to get publishers to reprint many of the classics of Asian American literature and we were met with rejection. In 1975, we began a campaign to get No-No Boy reissued after it had finally gone out of print. When no publisher took interest, the four of us as CARP (Combined Asian American Resources Project) pulled together enough money to publish it ourselves in 1976, in an edition of 3,000—that was all we could afford at the time. In fact, we did not even have enough money to pay the printer, so we offered a discount to readers if they purchased the book in advance of the release date. Before the book even came off the press, the entire first printing was sold out—mostly to Japanese American readers. The book’s time had finally arrived and the readers who ignored Okada now embraced him. We had made enough money to go into a second printing, and in the middle of that printing from CARP, the University of Washington (UW) Press inquired if they could obtain the rights to publish No-No Boy. I remember feeling irritated with the UW Press after I had initially offered the book to them and they had turned it down, and I remember telling them at a meeting that I had to mail each and every copy of the novel myself, carry them around in the trunk of my car, scrape together money for the publication. I challenged the UW Press to start printing other classics of Asian American literature—essentially the authors included in Aiiieeeee!. And, they did. One after another. Finally in 1979, CARP turned over the rights to No-No Boy to the UW Press because of their demonstrated commitment to Asian American literature. In the 40 years they’ve been publishing No-No Boy, they’ve sold over 158,000 copies of the book.

Earlier this year, when Penguin announced they were publishing No-No Boy, I was both confused and angered. Penguin had determined that the book was in the public domain, but I perceived their move as a violation of the copyright we had taken out in 1976 on behalf of the Okada family. Penguin didn’t grasp how the history of the novel’s publication was as important as the novel. It seemed to me that the literary estate of a writer of color was not of any value—Penguin had not even attempted to contact the Okada family, pay them royalties, or contact the current publisher, UW Press, before publishing and releasing their own version. The short version of that controversy is that UW Press, Asian American writers, Asian American literary organizations, academic and scholarly organizations all supported a call I initiated on social media to insist that Penguin acknowledge the violation and withdraw their edition from distribution. After just two and half weeks of public pressure and negotiation among attorneys through the summer months this year, it was determined that the book was not in the public domain. Penguin withdrew the book from distribution in the United States. Dorothea Okada, John Okada’s daughter, summed it up by stating that the family was happy with the 40-year history of their relationship with the UW Press and there was no need for another publisher—in this case, a publisher who made no attempt to even contact them. What I learned very early on, even as an undergraduate student, is the value of the literary property of the writers who came before me. As a 20-year-old, I had reached out to the Okada family, flew down at my own expense to Los Angeles to meet John Okada’s widow, Dorothy Okada, to say to her how much John’s novel had meant to me and that I would make sure that it was recognized and brought back into print and would be read.

Don’t get me wrong, I support the publication of Asian American writers by all publishers, Penguin included. My novel, Homebase and even Aiiieeeee! and The Big Aiiieeeee! were once reprinted by Penguin or a subsidiary of Penguin. But the approach and process involved in Penguin’s decision to publish No-No Boy seemed uninformed and poorly researched. In fact, several editors from other publishing companies have emailed me about the controversy and the teachable moment drawn out in the press, namely that books are not just property. If a publisher wanted to publish classic works of Asian American literature, they should try asking Asian American writers what the book means to us before assuming that it is in the public domain. And even if a book is determined to be in the public domain, I would expect an editor to reach out to the family of the author, both as a courtesy and to acknowledge their commitment to bring that author’s work back into print. The UW Press began their commitment to publishing Asian American literature by asking Asian American authors, and they now have the largest, most significant catalog of Asian American literature.

What Penguin didn’t realize is that No-No Boy occupies a place in my own literary history as it does for countless other Asian American writers today. In the midst of the controversy in June 2019, writer Viet Thanh Nguyen tweeted that he was “disappointed in [Penguin Classics] for appropriating John Okada’s No-No Boy.” He shared that it was “sobering to be reminded of how I am older than John Okada when he died, thinking his novel No-No Boy has been ignored by American & Japanese American readers. If he had lived just 15 years more, he’d see his work read in universities and discussed deeply by scholars.”

Shawn Wong is a professor English and Cinema & Media Studies at the University of Washington. He is completing work on his third novel, The Ancient and Occupied Heart of Greg Li. 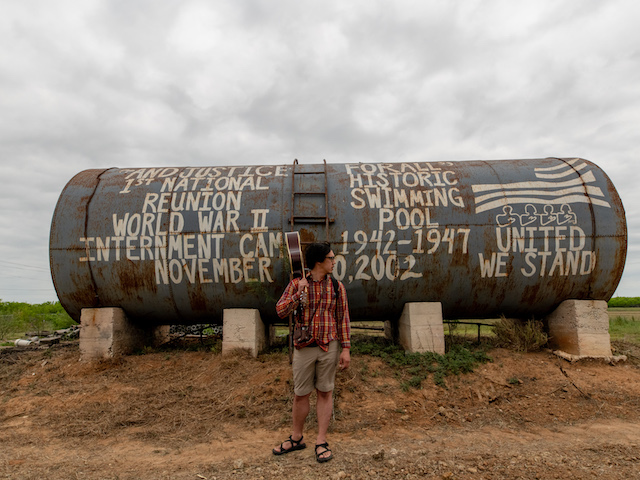 The Ghosts of No-No Boy in a Nation That Still Imprisons Immigrants
As a historian and musician, Julian Saporiti has toured past and present sites of migrant detention. He calls his project No-No Boy. 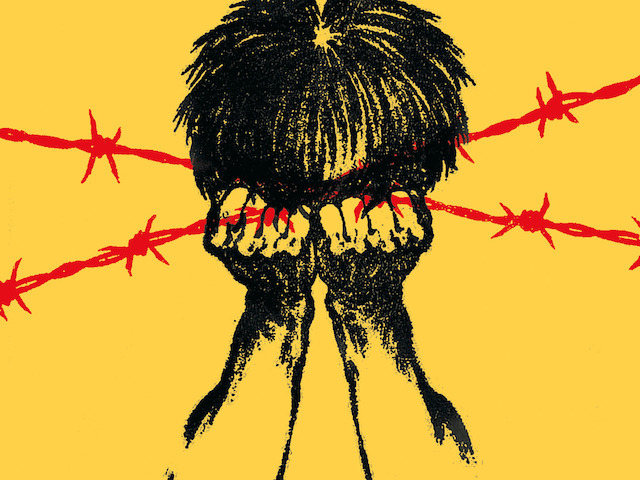