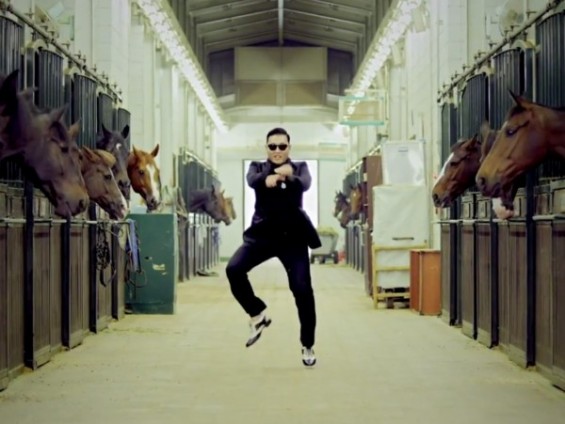 Spitting words through lips coated in fake snow—surging clumsily through the surface of a spa pool—galloping against a backdrop of immaculate high rise buildings and tennis courts—these scenes from the video “Gangnam Style” by Korean hip hop artist PSY are now replaying themselves in the minds of 50 million YouTube viewers and counting. Perhaps you have seen it yourself, maybe more than once.

While the lyrics are ostensibly about PSY proclaiming himself a classy guy while conjuring up his dream girlfriend, the video has taken on a life of its own beyond the Korean pop charts, and the title, “Gangnam Style,” has become a new shorthand for swag. Taking a glance at social media, it appears you can have eggs Gangnam Style, Olympic penalty kicks Gangnam Style, or crash the prom Gangnam Style. Some fans, like Josh Groban, have tweeted, “It’s a Gangnam Style world and we are all living in it.”

Most are content to marvel and move on, allowing the video to remain largely inscrutable. College Humor prefaced the video with, “No, we cannot quite figure it out, either. We just know that we want to.” The Wall Street Journal admitted, “It’s hard to pinpoint exactly how or why PSY’s video took off among America’s online hipsters.” At Heavy.com, a reviewer wrote, “The name of the song is ‘Gangnam Style,’ but that hardly seems important in the face of the monumental artistic achievement that is the video.” The overriding sentiment of the day seems to be that “Gangnam Style” is yet another marvelous internet artifact, satisfying mostly in its strangeness.

Yet I think something would be lost if we left “Gangnam Style” at that. PSY does something in his video that few other artists, Korean or otherwise, do: He parodies the wealthiest, most powerful neighborhood in South Korea. Sure, he uses physical humor to make it seemingly about him, a man who wants to project glamour but keeps falling short. All of his mannerisms, from the curled upper lip to a sinister neck-stretching move, come from the repertoire of a rich playboy, and in his hands, they become a little laughable. But ultimately, by declaring “Oppa is Gangnam Style,” he turns the lens on Gangnam, getting specific about power and privilege in a country where a single district has long dominated in almost every arena.

What is Gangnam exactly? As one Korean housewife shared with the Korean Herald, “You have to live in Gangnam to be called rich. That’s why we call Korea the ‘Republic of Gangnam.'”

To be clear, Gangnam has no real equivalent in the United States. The closest approximation would be Silicon Valley, Wall Street, Beverly Hills, Manhattan’s Upper East Side, and Miami Beach all rolled into one. From the video, most people can gather that Gangnam has some happening clubs and swank amenities—but its real estate is also the most expensive in the nation (at roughly $14,000 per pyong, or 3.3 square meters) and, although just 15 square miles, more valuable than all of the real estate in Korea’s second largest city of Busan. Combined with its neighbors, Seocho and Songpa, often lumped under “Gangnam” as well, its land value accounts for 10 percent of the nation’s real estate value.

It is headquarters to Korea’s largest corporations, from Samsung to Hyundai, host to the bulk of its financial and banking institutions, home to a great number of its elected national officials, and, on top of this, the preferred hood of movie and pop music stars. If the heirs of Exxon Mobil, Wal-Mart’s Walton family, Chevron, General Electric, Apple, and AT&T (America’s most profitable corporations) all lived in one district and went to the same schools, that would be in Gangnam. If most subway lines and national bus routes converged in one location, again—that would be in Gangnam. None of this happened by chance, of course, but through deliberate government investment since the 1970s which transformed Gangnam from exurban farmland to gleaming metropolitan center in the space of a few decades.

This extreme wealth translates most visibly in the high stakes world of education in South Korea. This is where Gangnam style is not so far from the United States. Imagine if 41 percent of Harvard University undergrads came from a single neighborhood. This is what happens in Gangnam. In 2010, Gangnam’s education budget was $25 million, or more than 8 times the budget of a relatively poor district, which spent $3 million. In this aspect, Gangnam Style means no penny is spared to make sure one’s child can get ahead. Thus, 1 in 25 elementary school students from Gangnam study abroad, mostly in English-speaking countries, to improve their competitive edge. The culture of competition was even the subject of an entire Korean drama series called “Catch a Gangnam Mother.” This preference for international schooling translates into higher education as well, especially in the arts, design and humanities fields. Thus, at New York’s Parson’s School for Design, where the largest group of international students comes from South Korea, a Korean friend attending the school commented, “Oh, they all come from the same few blocks in Gangnam.” While this may be an exaggeration, in all likelihood, Gangnam is probably the most represented among Korean international students attending U.S. schools. There are roughly 28,000 international students from South Korea in New York City alone.

On the flip side, the predominance of Gangnam youth studying abroad means that Gangnam is also where they bring some of their newly adopted cultures home. Thus, Gangnam is known for its hip-hop clubs and hip-hop apparel stores. YG Entertainment, PSY’s new management company, also owns a club there.

So, is it true that we are all living Gangnam Style? Seoul has the distinction of being the city where people work the most hours a year among all OECD countries, at 2111 hours in 2010, more than 50 working days over the OECD average. For blue-collar workers, a 12-hour day is normal. More than half the workforce finds employment in contractual or temporary labor, in which unpaid or mandatory overtime is a given. For young professionals, getting out of the office before 10 or 11 p.m. is a rarity. By 2008, South Korea was no. 3 in income disparity among OECD nations, and the wealth gap has not lessened. Times have only gotten tougher for the poorest in South Korea, but the wealthiest 20 percent have seen a rise of more than 20 percent in their disposable income.

Thus, when PSY goes to town in yoga classes, stables, party buses and tennis courts, he is showcasing forms of leisure that are not accessible to most Koreans on a regular basis. At the same time, he can’t quite cut it. He’s in a bathhouse with gangsters (signified by their tattoos) instead of salarymen, he’s partying on a bus with retirees, and he’s posturing from the throne of a tiny toilet stall. He twists every signifier of wealth into a hilarious ‘what if?’

I can’t help seeing the slightest helping of social critique in his parody of the wealthy upper class. His video, in a sense, is a visual smorgasborg of culturally-specific class symbols, but the high-production spectacle is so marvelous that we could get lost in the empty thrill of it.

Is oppa Gangnam Style? So few of us are, and so, PSY says, he’s going to have fun laughing at it all. 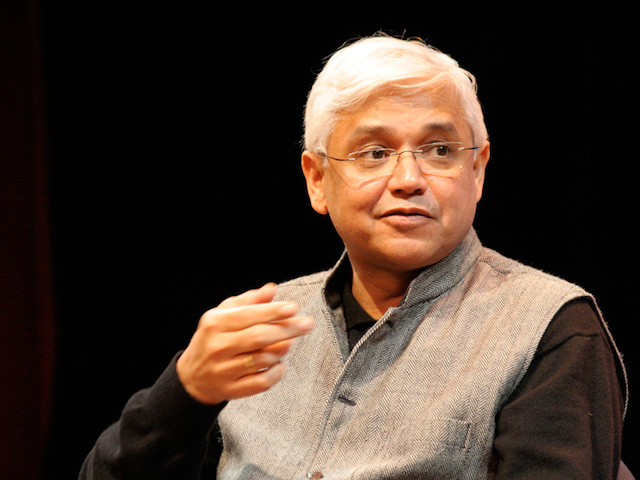 Watch Amitav Ghosh Talk about the Ibis Trilogy
Brooklyn, Opium, Diaspora, Imodium. The celebrated writer in conversation on the release of River of Smoke in 2011

Sea Mothers
My child, we all become white-haired soon enough.