The British desi band’s kitschy, three-chord hit appeared on episodes of Friends and in a Gap commercial. 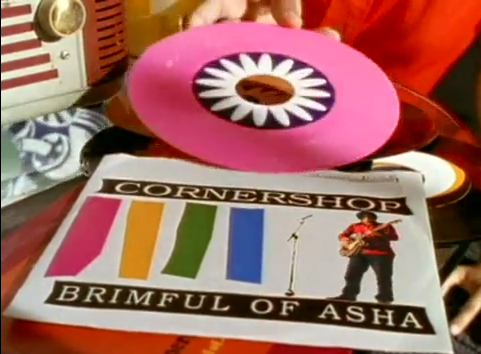 Traces of India were scarce in the pop soundscape of ’90s America, and if they did at all appear, they arrived by way of England. Rock and roll’s long flirtation with a mysticized East was rekindled by psych-rock acts like Spacemen 3 and Britpop groups like Kula Shaker, who experimented with the ragas and drones of Hindustani classical music, chanted Vedic shastras, and at times turned up onstage in kurtas. A more original development came from the diaspora, in British Asian bands and DJs like Talvin Singh, Bally Sagoo, and the Asian Dub Foundation, who fused emergent genres of jungle and drum and bass with bhangra and the musical idioms of the subcontinent.  But only one band clawed their way into heavy radio rotation, reaching a mass audience stateside. That band was Cornershop, who arrived in January 1998 with their kitschy, three-chord hit, “Brimful of Asha.”

Cornershop had already made a splash in England. Formed by frontman Tjinder Singh and multi-instrumentalist Ben Ayres in 1991, the band named themselves after the South Asian-owned convenience stores ubiquitous in London and developed a reputation for being slyly political. In 1992, they caught the attention of the British press when they burned a Morrissey poster in front of the headquarters of recording behemoth EMI as a protest against the ex-Smiths singer’s engagement with National Front imagery and anti-South Asian sentiment.

As for the music, Cornershop’s early recordings were noisy and anarchic. Four-minute pop tunes were interspersed with long and winding experiments in East-meets-West pastiche, and Singh sang as often in English as he did in Punjabi. By 1997, when they released their third LP, When I Was Born for the 7th Time, Cornershop had polished and refined their craft, producing a record of loping breakbeats and gentle melodies. The politics were still there, but now they hid beneath a glossy surface of catchier tunes. “We’re gonna let it up / like India House on fire,” Singh mumbles in the album opener, invoking images of the race riots that had burned across Asian neighborhoods decades earlier.

That the band’s popularity at home hinged on this sort of historical currency makes Cornershop’s breakthrough in the U.S. all the more surprising. If in England the band seemed a political act unafraid of taking shots at the nation’s xenophobic culture, then in the U.S., they came off as novelty. “Brimful of Asha,” their American hit, is, after all, a love letter to Indian film music of the 1960s, rife with allusions that non-desi listeners could not have possibly caught. At one point, Singh name-checks Mohammad Rafi, Lata Mangeshkar, and the track’s titular muse Asha Bhosle—all playback singers who voiced the songs that actors would later lip-sync to on the silver screen. Even the non-Indian allusions are obscure.  In 1997, who, other than crate-diggers, would have remembered French popstar Jacques Dutronc?  The song never explains its arcane references–and yet none of its American listeners, who heard it on episodes of Friends and in Gap commercials, seemed to mind.

Perhaps the popularity of “Brimful of Asha” in the U.S. was an anomaly, one of those inexplicable hits like Baz Luhrmann’s saccharine “Everybody’s Free (To Wear Sunscreen)” or Trio’s nonsensical “Da Da Da”–songs whose sheer novelty made them worth a listen. But novelty doesn’t explain the acclaim that surrounded the album. When I Was Born for the 7th Time topped year-end Best Of lists and earned Spin magazine’s distinction for Album of the Year, beating out an exceptionally strong cohort that included Radiohead’s OK Computer, Björk’s Homogenic, and the Verve’s Urban Hymns. Cornershop somehow managed to crash the gates of American alternative music’s largely white scene. Their grab-bag aesthetic, which culled sounds from sources as diverse as hip hop and psych-rock, Bollywood and Marc Bolan, represented a worldly, polyglot riot.  And for desi listeners in the U.S. who could actually follow Cornershop’s points of reference, the song’s hidden message of hope, “asha,” made us feel like we were in on a secret.

Manan Desai teaches at Syracuse University and serves on the board of directors for the South Asian American Digital Archive. He is an occasional contributor to Slant and Hyphen.
Tags: Asha Bhosle, Cornershop, Manan Desai, Morrissey, Tjinder Singh