The Buddha has been in this prison for as long as any of us can remember. He has always been here, watching over our Sangha meetings, sitting with us in practice. 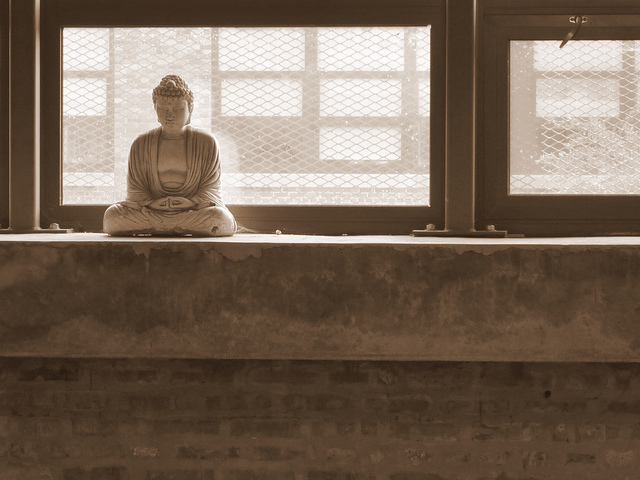 Renzi and I used to take care of the Buddha. He sits outside the prison chapel on a small patch of earth that was allotted to Buddhist prisoners by a warden, long since retired.

On this patch of earth our Bodhi Tree is a maple. It has a stout trunk and gnarled roots that have grown out of the ground in many places. Hard to believe it blew into this prison during a windstorm as a seed, sprouted from a crack in the sidewalk, then was planted where it now grows by a Buddhist.

A pair of apple trees are nearby. They are siblings: sprouted from seeds of a single apple smuggled out of the chow hall. They too were planted by a Buddhist.

Between the trees is a pond. It is not big—in fact, it is smaller than a bathtub in the free world. But it is the only pond I have ever seen or heard of inside a prison.

Beside this pond is where the Buddha sits. And for as long as any of us can remember, He has always been here, watching over our Sangha meetings, sitting with us in practice.

The only reason Renzi and I were allowed to take care of the Buddha was that the chapel officer, Ms. B., let us. When we first asked, she said no, because it was not our assigned work area. But a week later, she stopped us after a Sangha meeting and told us that she would permit it. Renzi thanked her with a bow and a Tagalog-inflected pronouncement of gratitude.

For several years Renzi took off from his job in the afternoons as a janitor at the school and I took long breaks from mine as a clerk inside the chapel, so we could cut grass, rake leaves, keep the trees neatly trimmed so the Captain would not make us cut them down, and pull the weeds that grew around the Buddha. It was while doing this that we discovered that, like us, Ms. B. liked birds.

Whenever the Northern flicker would fly in and issue its strange call, then hammer at the ground for insects only he knew were there, we would go and get Ms. B. She was not all that scientific in her observation. “Very cool” were the words she used to describe the Flicker.

A meadowlark visited last fall. The first one Renzi and I had ever seen. Ms. B., too. We had to look it up in a bird book to identify what it was.

But, more than birds, Ms. B. liked the cat. A scarred and tough little girl cat who would skirt around in the prison like a ghost. The cat used to sleep behind the chapel during the day. In the summer, she curled up next to the building because the sun warmed its bricks. In the winter, she hid beneath the ventilation ducts in order to stay out of the rain.

At some point, I’m not sure when exactly, Ms. B. began to take bits of food out to leave for the cat. The food was from her own lunch and, whenever she left it, she always directed kind and encouraging words toward the cat. Once she even called to the cat and tried to entice her to come closer—which did not strike me as a particularly good idea, because the cat was feral.

But it was in Ms. B’s interaction with the cat, and her humane treatment of Renzi and I, that I realize I was most clearly able to see the difference between a guard and a corrections officer. Ms. B. did not have to let us care for the space in which our Sangha of 12 shared a cherished sense of community, received Dharma teachings, and sat in silent practice twice a week. I know because Renzi and I have been in three different prisons in which Buddhists are afforded next to nothing, save perhaps an hour a week in a room through which ceaseless traffic passes and sitting practice is near impossible.

Ms. B. inspired and nurtured personal reform in others through her own example as a human being. And that does not mean that she was not tough. When it was time to lock us in our cells and order us around, she did not hesitate to do that. But that is far from all she was.

It was raining the night Ms. B. let me leave work at the chapel 40 minutes early, to meet Renzi and another Sangha member on the Yard. The rain receded to a mist as the three of us walked the track, talking, oblivious to the irrevocable harm being wrought. That was the evening a disturbed being entered the chapel and murdered Ms. B.

Since Ms. B’s death, a lot has been said about prisoners by guards on television, in newspapers, on the picket line outside the prison, and in front of state lawmakers. A lot has been said by people outside prison who do not know us, or what it is like in here. Even the governor said, at a press conference, “You need to remember that those are bad people in there and they do bad things.”

I wish I could say this had no effect on us, either as prisoners or as Buddhists who practice inside these walls. But the truth is, it nearly tore us apart. At times it made us angry, quick to point fingers of blame back in the direction from which they were pointed. But worst of all, it made many of us begin to doubt ourselves, and question our ability to ever be more than we were before we were sent here.

We have recognized our own ignorance. As a Sangha, we have since pulled together and resolved that we will no longer be a vehicle for anger; we will not point fingers of blame or doubt ourselves.

We understand that referring to all of us inside these walls as bad people may help the governor and others make sense of what happened here. And if that is the case, we invite them to continue to do so.

But as a Sangha, we do not share that view, about ourselves or others who are not Buddhists. We believe in the ability of human beings to change for the better by working with their minds to cultivate compassion and penetrate ignorance. We believe this because we see it around us. Our hearts are broken. We miss Ms. B.

But we can see the Buddha from the Big Yard. Sitting nobly among the weeds. He is still there.

This essay was published in partnership with Medium. You can find more stories from incarcerated writers in their Prison Stories anthology.

Arthur Longworth is the author of two books and recipient of six national PEN America awards. He is incarcerated at Monroe Correctional Complex in Monroe, Washington.
Tags: Arthur Longworth