The Flushing Main Street stop may be the end of the line for the 7 train, but for some, the stop is just a layover towards a final destination. The number of public bus routes coiled around Main Street attest to this, as more than 15 different routes have stops within a one-block radius of the subway entrance. Meanwhile, upon exiting the station, all along Main Street, small signs advertise express buses to Woodbury Commons and other tri-state area malls. Livery cab drivers and Korean church vans idle alongside SUVs and other sedans at the traffic lights.

Yet, as night approaches, not everyone is homeward-bound. One evening, as I ducked inside Queens Crossing Mall to escape a sudden downpour, I found myself in the middle of a way station to places I had never been.

Next to the mall, private buses leave six times a day for Sands Casino in Bethlehem, Pennsylvania. There is no sign, and if you don’t know where to look, there appears to be no one selling tickets.

But that night, as I ran into the food court, I passed an irritated crowd of more than sixty people waiting on the street next to a bus with tinted windows. On its side, a mustard-colored cursive stroke spelled out “Sands.” A woman yelled in Chinese at the ticket-seller, as he tried to soothe her in English. “You need to calm down! Everyone’s getting on the bus! What’s the rush?” 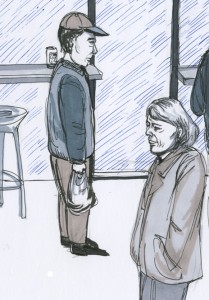 As I sat down at a countertop facing the boarding area, the bus pulled away. But people continued to arrive. I realized that I was in an oddly quiet corner of the food court. Here, unlike the other side full of tables, no one ate. They were all waiting for the next bus.

One elderly Asian man stared at me, as if trying to place me.

“Are you going to Sands?” I asked him.

The man looked worried. “You don’t have one? You need to get one!” He peered behind me. “You know…he must be here somewhere. Let me go find him!” He turned to look for the ticket seller.

“Yeah, well, make sure you have a ticket,” he repeated. “You get it here,” he explained, gesturing vaguely behind me.

But as I glanced around, there were no signs of anything resembling a bus stop, nothing to mark that just a few minutes ago, upwards of sixty people had been waiting to get on a bus. It seemed I had inadvertently walked into a waiting room of regulars who would quickly realize I wasn’t one of them. 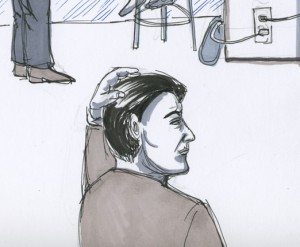 As I continued waiting for my food and talking to this elderly man, a South Asian man in a khaki jacket ran up to me.

“I need a ticket!” he commanded, out of breath.

“Yeah!” he answered impatiently. He looked at my empty hands a little frantically.

For a brief moment, I was reminded of how much I blended into Flushing’s street crowds as in almost no other neighborhood. This was just one episode among the many instances of being mistaken for the restaurant waitress, the store clerk, the bakery employee. But what struck me this time was this man’s urgency and frustration, and how simply standing there in the food court had made me part of the milieu.

When my food came, I sat down to eat and began flipping a book I had just purchased.

“I didn’t know you were Korean,” said a voice behind me, in Korean. It was the older man again, now looking at the cover of my book.

“Oh, I thought you were Chinese,” he said, smiling to himself.

I paused. “I thought you were Chinese, too,” I said.

He stood there, and I asked, “Wait, so why did you think I was Chinese?”

“Because you are here,” he said.

“You mean, in this part of town? In this mall? Where?” 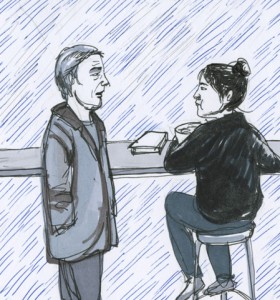 “You mean, no Korean young ladies usually hang out here?”

“Well, I came here because I really like these noodles.”

“Ah yes, well, anyway, I won’t bother you. Have a good meal,” he said politely, and walked off.

As I ate, I could see him on the other side of a mirrored column, staring out the window.

I wanted to ask him about going to the casinos—what it was like, why he liked to go. But it seemed as if I had struck out with him twice. One, I wasn’t headed on the bus—I was an outsider. On top of that, I was Korean. I noticed that unlike the curious Korean shopkeepers and workers who often fired off a stream of personal questions at me within the first few minutes of meeting me, this man didn’t want to make small talk. He didn’t feel compelled to say that I reminded him of his daughter or his niece, as others did. He only wanted to know that I was getting on the bus. Otherwise, it was as though he had nothing to say to me, or didn’t want to talk to me, especially now that he realized I was Korean.

There’s a bigger story here, too, of Flushing’s ethnic zones, invisible boundary lines that are never crossed or crossed by the intrepid few. It actually hadn’t occurred to me that Koreans, with their myriad private transit options, would ride buses run by Chinese companies. Among Koreans who lived or worked in Flushing, I often heard, “Oh, I never go to the Chinese part of Flushing. I have no idea where to go or eat there.” This Korean man, however, strode across that invisible line and boarded a Chinese company’s bus to Sands. He seemed comfortable with all the regulars, Chinese or otherwise, greeting them gruffly one by one.

When I finished my meal and approached the door to leave, a middle-aged black man sat seated near the window smiled and asked, “Oh, you’re not going on the bus?”

His name was Dave, and he first went to casinos on the Manhattan Chinatown buses, as he learned about them from going to the Buddhist vegetarian restaurants in the neighborhood. He had used the private buses to go all over the country; first, it was mostly about wanting the boxing match tickets that came with the packages. But now he went and gambled himself—“but I know when to stop,” he assured me. “The other guys, they’ll win and keep going, and lose everything. I don’t do that.” 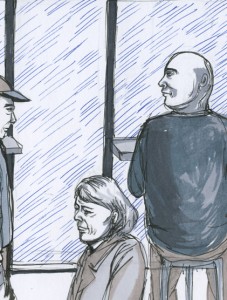 Before he had begun riding the private buses to the casinos, he had never been to Flushing. In fact, the only part of Queens he knew was Shea Stadium. Now he lived in Jersey. Jersey! I was surprised at how far he came to take this bus. What was the reason? He explained how cheap it was, the difference between ticket prices to Sands, Foxwoods, and Mohegan Sun Casinos. “Hey, it’s just a few dollars, but this trip is cheaper, it helps.”

What he really wanted to talk about was how he surprised he was by Flushing. “Flushing is a happening place!” he joked. He had been astonished because he had expected Flushing to be populated primarily by Asian elders. He also expected it to be much more suburban—“You know, it’s Queens! You just think it’s going to be like that!”

But while waiting for the bus in the mall, Dave sees young Asian American professionals streaming through the doors. Fashion-conscious Asians, too. “They all check themselves in that mirror when they come in,” he said, pointing to the mirrored column near the door. “And they’re not at all what I expected – now they’re dressed in all the latest, they want to show they’re making some cash.”

But in the end, he mostly knew Flushing as the bus stop for Sands. For the past several years, he’s made the trip three or four times a week, usually taking the 10 p.m. bus, which arrived at Sands by midnight, and then coming back to the city by 7 a.m. “Yeah, you’re tired, but at least you had fun,” he said.

Crown Heights—where he was originally from—was a different story. It was his home turf, but it had changed dramatically. He spoke obliquely about the gentrification and the new influx of whites, and how when he visited, the long-term residents would speculate about what made their new neighbors come. He understood Manhattan was no fun anymore, that it had “lost something,” and it made sense to him that young people would flee that borough and seek shelter in Crown Heights. I wondered if he himself could afford to live in Crown Heights anymore. But even though he was jovial, I could tell he didn’t want to talk about himself very much. Before I left, he gestured to the bubble tea café behind him. “So, what is that stuff? Is it good?” he asked. “Everyone’s drinking it, and I have no idea what it is!”

That night, my evening plan for a quick meal had intersected with a waiting room of casino regulars. While I had intended at some point to research the rise in regulatory closings of these private bus companies, these brief encounters in the food court made me think about other questions as well. They gave me a glimpse into Flushing as a transit hub for people, especially those who were economically vulnerable, from all around the city. To Dave, Flushing was a bright blur between the evening hours and dawn, with the dazzle of a Chinese upper-middle class flitting past him, clad in the latest designer fashions. To the other New Yorkers in the food court, waiting solemnly and nervously for the next ride out, I wasn’t exactly sure.

Lakshmi’s Night: A Muslim Woman Honors Diwali
I recall the monkey god’s gaze at the Ganapati Temple and my own impulsive desire to offer him a coconut.