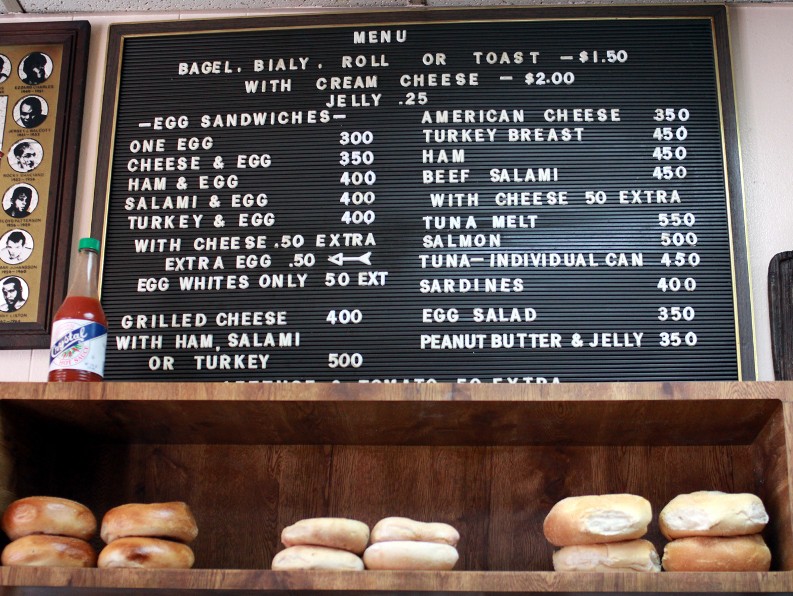 The radio is set to Q104.3, “New York’s Classic Rock.” The DJ asks listeners which movie the guy from the “We’re Not Gonna Take It” music video made an appearance in.

Across the wood-panel counter, Carmine Morales doesn’t seem to be listening. His tongue juts out slightly as he concentrates on slicing meat, toasting bagels, and frying eggs stamped with squares of American cheese.

He looks up from his work and takes my order with a cock of his brow.

“White, wheat, or rye?” he asks, landing hard on the last syllable.

“You know how when you hear a song, you remember exactly who you were with or where you were when you first heard it? And it’s different for everyone. But with a video all you remember is the video. You don’t pay attention to anything else, and everyone remembers the same thing. He didn’t like that.”

He doesn’t hesitate. “The best are “Walk This Way” by Run DMC… and “Rock the Casbah.” That one starts with an Arab hitchhiker being picked up by a Hasidic Jew. If that’s not funny, I don’t know what is!”

As if on cue, “Walk This Way” and “Rock the Casbah” come on the radio, one after the other.

“I should buy some lotto tickets today,” Morales says. 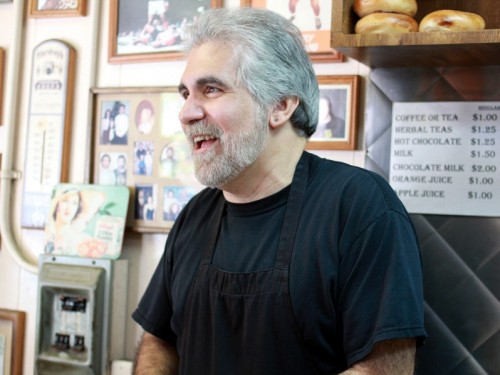 Carmine Morales, age 61, owns and operates Classic Coffee Shop, a tiny, old-style lunch counter at 56 Hester Street in the Lower East Side. A fixture of the neighborhood, the shop sits among Chinese-owned laundries and bodegas on the one hand, and high-end brunch joints and minimalist boutiques on the other.

With neat grey hair and a beard, Morales looks cooly professional: black tee-shirt, belted stonewashed jeans, and a black apron. He wears a silver peace-sign earring on his left ear and an embossed silver wedding band.

Most people call him “Rabbi,” a nickname that has nothing to do with his religion or facial hair. He is a teacher of sorts, his customers’ guru. He remembers everyone, their orders, and what they last talked about, like the street fair organized by a hipster in unlaced black Keds or the large coffee with milk and Sweet’N Low that an Asian guy summons from the walk-up window.

No-frills Classic Coffee Shop is a rejoinder to “artisanal” New York and the fancy, overproduced restaurants taking over the neighborhood. Kraft Singles and Fox’s ‘u-bet’ Chocolate Flavor Syrup are staples of the store, along with Doublemint gum ($.35) and drip-brewed Folgers served in “We are happy to serve you” Anthora coffee cups ($1.00). Mid-century advertisements and tchotchkes line the walls.

Thirty-six years ago, when the area was largely populated by working-class immigrants, Morales’s father Miguel (“Mike”) inherited the diner from Benny Steinberg. “I grew up on this block,” Morales said, motioning to a black-and-white framed photograph behind me. “That’s my first grade picture.” 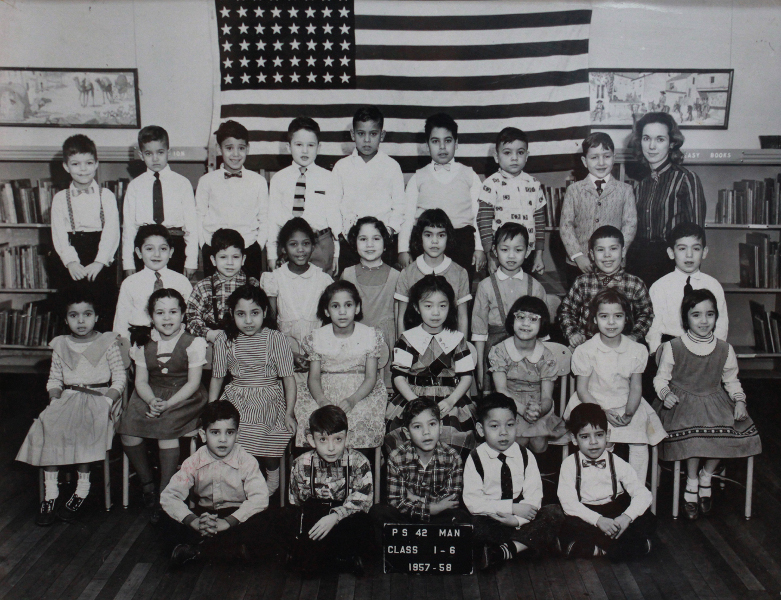 I looked at the photo from 1957, taken at PS42, still across the street from the diner. The rows of tiny faces are white, black, Asian, Latino—a level of organic diversity you’d need a dozen bus routes to manufacture today.

Morales’s daughter also started out at PS42 but “had a hard time there… everyone else was Chinese, and you know how kids talk among themselves. She didn’t know what they were saying,” he explained.

Both his son and daughter are now grown adults, and he and Ilene, his wife of 33 years, live near Seward Park. On weekends, the couple drives to their house in Orange County to laze and escape the daily grind. 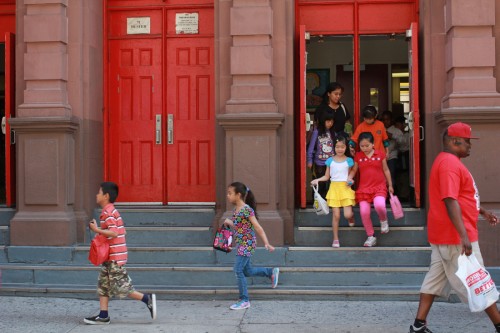 It’s on the Lower East Side, though, that Morales is most at home. “When I walk around with my wife in this neighborhood,” he said, “people yell at me in the street. My wife said, ‘What’re you, the mayor around here?’… Kids in the park yelled, ‘Hey bagel man!’ I felt like a celebrity. But people always remember where they eat.”

Dolores, an elderly woman who frequents the shop, has also spent her life in the area. She came in on a hot summer Friday for coffee and a buttered bialy. “Did you take your pills?” she asked, prompting Morales to get out his heart medication. “I used to take drugs to get high,” he chuckled. “Now I take them to stay healthy.”

Carmen, a fast-talking Avon saleswoman, took a seat next to me. “Rabbi, you seen Johnny or Chico?” she asked. When he said no and explained that Johnny had gotten shingles, Carmen recommended applying lemon. “It works if you believe it.”

Dolores complimented Carmen on her continued weight loss. She’d gone from 410 to 187 pounds and showed me the “before” photo as proof. The picture had been taken in the Classic Coffee Shop. 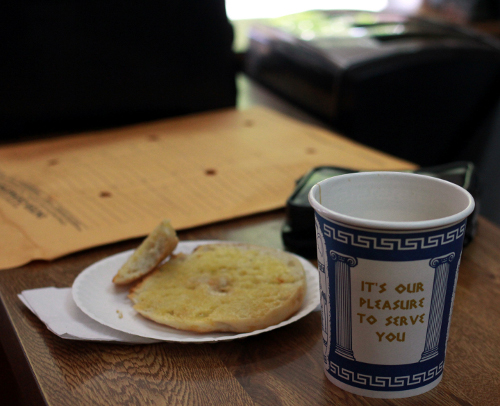 Morales compares his place to the bar from “Cheers.”

“I’m Sam Malone. All these weird people come in here, real characters… And I get to play my music. That’s the most important thing.”

He makes his selections from the carefully labeled mix tapes and CDs stacked against the diner’s wood-paneled wall. The tunes that morning—Oldies revival singer Colin James and a little Marvin Gaye—put Morales in a sentimental mood and got him talking about the old neighborhood.

“When I was growing up, the Lower East Side was down and out. It was dirty, and there were heroin addicts all over. The thing is, now it’s really nice. You’ve even got trees on the streets.

“I definitely prefer it now… Most people here feel that way. They make fun of stuff—the hipsters, the pretense of it all—but it’s gotta be better than before,” he said.

As we were talking, a regular customer in faded jeans and a baseball cap stuck his head through the walk-up window, making eye contact with Morales. “To stay?” and the guy simply nodded. He came back 10 minutes later to claim his bagel sandwich and coffee, which he silently ate and paid for.

“It’s not totally gentrified,” Morales said. “I like the fact that Chinese families still live here. It prevents the neighborhood from becoming a destination rather than a place people live.” 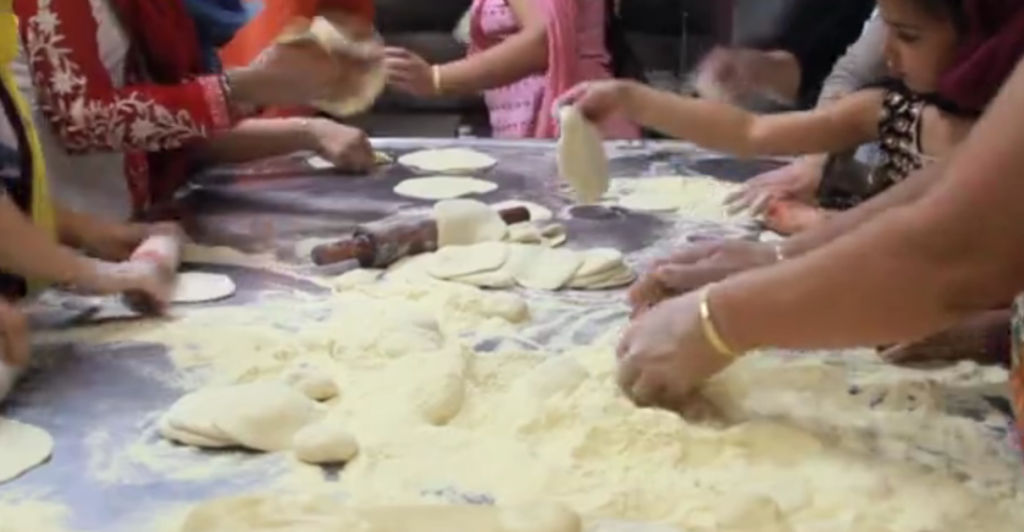 The Spirit of Parshaada [VIDEO]
Roti is everyday food in Punjabi homes. At the gurdwara, it takes on a new name and becomes a symbol of service.