Essays    Reportage    Marginalia    Interviews    Poetry    Fiction    Videos    Everything
Open City
“Coffee Is Like a Painting,” Says The Most Fascinating Barista in Queens

The best French-pressed coffee in town is brewed in Elmhurst. No, really. 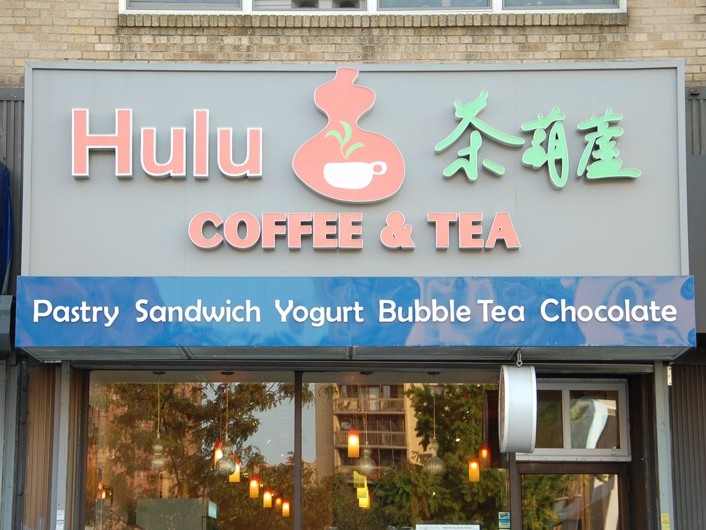 Recently I found myself in Elmhurst, meandering down Broadway in search of a quick pick-me-up. I had just scored a couple of promising-looking Burmese CDs from my friend Zaw at Thiri Video (88-34 50th Avenue) and, though every cell in my body was screaming at me to turn tail back to Astoria and give the new discs a listen, it was simply too gorgeous out to justify my climbing back into the overly air-conditioned subway.

When I hit Queens Boulevard, I spotted a sign across the street: Hulu Coffee & Tea. From the look of it, I assumed it was a bubble tea shop. After crossing the borough’s widest thoroughfare, I could now see several large burlap bags bulging with coffee beans in the window and, just to the right of a couch and easy chair, a row of French presses lining a mounted wall-shelf. I stepped in.

A chalkboard sign on the wall informed me that I could purchase an individual cup of French-pressed coffee for $2.50. I was perplexed. I turned to the guy behind the counter. “You make French-pressed coffee?” I asked. He smiled warmly and suggested I try the Ethiopian Harar. I shrugged and said, “Sounds great.”

Several minutes later, my coffee arrived. “Let me know what you think.” I leaned over and inhaled. After blowing on it once or twice, I took a sip. The taste and texture were indescribable, almost like a creamy, very muted cocoa. The barista seemed to have noticed something change in my face and smiled a big toothy grin. “Well …?”

“Uh … yeah,” was all I managed to get out at first. “It’s … this is incredible,” I blurted out. He laughed. And then went on to tell me that there was really no such thing as a single “Harar” coffee, that there were not only different tribes in Harar, but that fluctuating weather conditions could dramatically change even a particular tribe’s crop from year to year.

“You are a coffee genius!” I thought, realizing that he must be the owner of the place. He somehow registered my mute compliment and laughed again. After finishing my coffee, I bought a pound of the Harar to take home with me.

Over time, the carton of half-and-half in my refrigerator slowly curdled, unused.

I began to frequent Hulu. One day, after discovering a Nigerian-run copy-shop and media store in Corona (Blessing Udeagu, 99-08 Lewis Avenue) that sold vintage high-life recordings on CD, I burst into my new favorite café and spread out the booty on the counter to show the owner. “Look at this!” I exhorted. I explained how rare it was to find Nigerian music, even in the melting pot that is Queens. He looked genuinely impressed. Then, without a word, he began brewing me a pressed coffee.

“This is Harar,” he told me, handing me the cup. “But a different tribe.”

I tasted it. My eyes began to mist over.

I talked about Hulu with my co-workers, referring to the older barista-owner as my BWF (“Best Weekend Friend”).

I recounted to them how I’d gone into Hulu one weekend and told my BWF about a guy I knew in the Boston suburbs who’d taken over a coffee place and introduced crepes and how that had made his business wildly successful. When I stopped in at Hulu the following weekend, my BWF was standing behind the counter scraping batter around on an electric crepe maker—over the course of the next hour he had me taste test three different kinds, one savory and two sweet, telling me he was planning to add crepes to the menu. “Soon after we roll out the crepes, I’m going to change the name of the place from Hulu Coffee and Tea to Café Hooloo,” he said, “to emphasize the food.”

When I told my officemates this story, they chided me. “How can you not know his name? It’s like that episode of Seinfeld when Jerry befriends the Pakistani restaurant owner, offers advice, and inadvertently sabotages his business when the owner blindly does everything Jerry says.”

I felt guilty—and a little clichéd. I made a point to, at the very least, ask my BWF his name the next time I stopped by.

“Jing Wang,” he told me. Jing had just made me an Americano and had taken a seat at my table. He’d been less than thrilled with the beans he’d been getting recently, but said he’d discovered that, by blending a few of them strategically together, and grinding them just-so for the espresso machine, he’d managed to make the perfect Americano. “How the fuck,” I choked, clearly in a state of semi-ecstasy, “did you make this?” I’d never had an Americano that tasted remotely like it. It was, if such a thing were possible, even creamier than some of the better presses Jing had made for me on weekends past.

“So a coffee bean has like five or six different things going on,” he explained, ignoring my state. “Acidity, like the bite or bitterness in beer; coffee with none tends to be flat, with no liveliness. Some liveliness is good, right?” I nodded. “But it’s like a painting; things have to come into balance. Nothing should overwhelm.”

Jing went on to explain body, how heavy or light a coffee feels, then aroma: “In Ethiopian Yirgacheffe, you can almost smell the flower in the coffee, 90 percent of what you taste is in the scent.”

Next there was the look, which was determined by whether or not a certain process made the coffee foam up a bit and how the different beans exuded slightly different hues, from the red of the Ethiopian to the extreme dark of the Indonesian.

Finally, the finish, or aftertaste: “The trademark of the roaster’s skill.” Jing explained how lightly roasted coffee should have a few seconds of acidity, bitterness and body, but that these sensations should vanish as quickly as they come. “If the coffee lingers in your mouth, it’s either over-roasted or somehow the roaster didn’t roast it to the right degree. If you roast too hard, all coffee winds up tasting like carbon.”

“Yeah,” I said, nodding enthusiastically. “But how did you make this? It’s incredible!”

Jing smiled. “I just messed around with different proportions of beans, different grinds, and eventually—” he shrugged and held his arms out. “A bean that presses blandly might be great when run through the espresso machine. And by blending several beans together and adjusting the grind, you can play with the taste until you get something like this. It’s a science,” he said, “and a lot of science is trial and error.”

He then told me that, after he’d hit on this particular blend, he’d exhorted his drip coffee drinkers to give it a try. “Earlier this week, a group of Columbian workers, regulars, came in later than usual, but I’d already dumped the drip brew they always get. So I convinced them to give my Americano a try.” When they returned the next day and Jing started to pour them their regular brew, they’d balked. “We want what you made us last night,” they demanded.

Jing was born and raised in Beijing and still remembers when President Nixon visited China. “I used to always listen to my favorite radio show, about the Korean War, and one day it just wasn’t on,” he told me. After a pause, what he was implying dawned on me: “Oh, right; you guys were pro-North Korea.” Jing smiled and confirmed: “They didn’t want Nixon to get wind of it.”

After Nixon’s visit in 1972, Jing’s family gradually began to emigrate from China to the United States. In 1977, his uncle, a music composer, made the move and then two years later, in 1979, Jing’s father, a scientist, settled in Woodside. Jing moved in with his father in 1984. He was a teenager. His brother and mother arrived soon after. I marvel at Jing’s almost complete lack of accent. “Yeah, they sent me to school upstate. If I had been in school in the city, I wouldn’t have been forced to learn English so intensively.”

I recently asked Jing how he became so obsessed with coffee. His answer was, to put it mildly, a circuitous one. After completing a BA and MBA, he took a year off to live in France and travel around Europe. “That maybe sparked my interest, because the coffee is so great over there.” I expected him to tell me that he had studied or experimented with coffee-making in earnest upon his return to the States. Instead, over the course of the next two hours, Jing detailed his slow climb in the banking and finance world.

He landed a job with a financial guarantee company and was sent to Singapore, where he rode the crest of the economic boom for several years, then returned to the United States when the tides turned during the 1997 Asian financial crisis. Jing left the company in 2006 and worked as an investment banker and then a trader. He hated it. I expected Jing to tell me that it was then that he got into coffee. Instead, he said he decided to become a painter.

Jing seems to personally know almost everyone who walks into his café. He greets them warmly, often by name. In many cases, he already knows what they want and begins to make it for them. He asks them how their work and lives are going. They tell him, often in great detail.

“Running a business was one of the last things I wanted to do,” he confessed. “But what I discovered was that, a lot of these people, they come here, they buy a beverage or snack, and hang out. It’s something meaningful for them.

“Despite the stress, I really like running this business,” he concluded. “Working in the financial industry, and even the year I took off to try my hand at painting—I felt cut off from the real world. But coffee and tea are a natural part of so many people’s routine, so you get a glimpse here of how much commonality there really is within all this diversity—and Elmhurst is one of the most culturally diverse neighborhoods on the planet. There’s a feeling of camaraderie here.”

Gary Sullivan is a poet and cartoonist, and writes about what he finds in immigrant-run bodegas at bodegapop.com.
Tags: Cafe Hooloo, Elmhurst, Jing Wang, The Kitchen Sink, coffee, espresso, food and drink