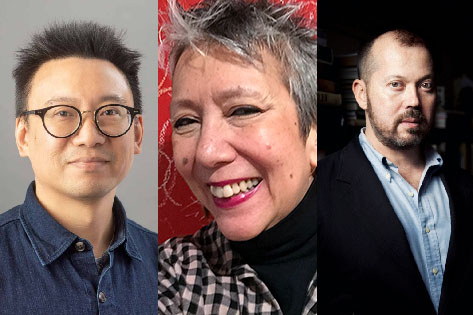 Penguin Classics is republishing four Asian American classics, offering a perfect chance for readers to learn more about the rich history of Asian American literature before 1965: The Hanging On Union Square by H.T. Hsiang; East Does West by Younghill Kang; No-No Boy by John Okada; and America Is In The Heart by Carlos Bulosan.

Alexander Chee is the author of the novels Edinburgh and The Queen of the Night, and the essay collection How To Write An Autobiographical Novel, all from Houghton Mifflin Harcourt. He is a contributing editor at The New Republic, and an editor at large at VQR. His essays and stories have appeared in The New York Times Book Review, T Magazine, Tin House, Slate, and Guernica, among others. He is winner of a 2003 Whiting Award, a 2004 NEA Fellowship in prose and a 2010 MCCA Fellowship, and residency fellowships from the MacDowell Colony, the VCCA, Civitella Ranieri and Amtrak. He is an associate professor of English and Creative Writing at Dartmouth College.

Novelist, playwright, poet, former punk band leader, Jessica Hagedorn is the recipient of the Workshop’s 2011 Lifetime Achievement Award. Her 1996 classic of Asian American literature, Gangster of Love, is part road novel, part immigrant family drama, and all rock ‘n’ roll, and features a character inspired by the poet Al Robles, Tony Robles’s uncle. “Gangster of Love” recently debuted on stage at the Magic Theatre in San Francisco. She is the author of several books, including Dogeaters, a National Book Award nominated classic of Asian American literature, Dream Jungle, and the novel Toxicology (Viking 2011), a Publishers Weekly Pick of the Week. Hagedorn is also the author of Danger And Beauty, a collection of poetry and prose, and the editor of three anthologies: Manila Noir, Charlie Chan Is Dead: An Anthology of Contemporary Asian American Fiction and Charlie Chan Is Dead 2: At Home In The World. She is the recipient of a Lucille Lortel Playwrights Fellowship, a Guggenheim Fiction Fellowship, and an NEA-TCG Playwriting Residency Fellowship, as well as fellowships from the Sundance Theatre Lab and the Sundance Screenwriters Lab. Hagedorn has taught in the MFA Playwriting Program at Yale, and in the MFA Creative Writing Program and LIU Brooklyn, NYU, and Columbia University.

Hua Hsu is an associate professor of English and director of the American Studies program. He is also a staff writer at the New Yorker and the author of A Floating Chinaman: Fantasy and Failure Across the Pacific (Harvard University Press, 2016.) He is currently on the editorial board of the Journal of Popular Music Studies, the advisory board of the Center for Experimental Humanities (NYU) and the executive board of the Asian American Writers’ Workshop. From 2014-2016, he was a fellow at New America.