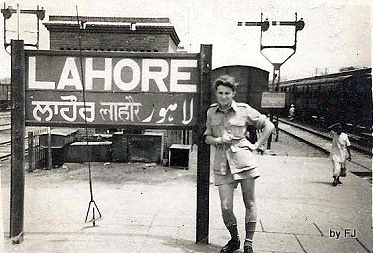 One of Hindi literature’s most well-known authors (and favorite frenemy of Manto’s), Upendranath Ashk is most well-known for his autobiographical six-volume 1947 novel Girti Divarein or, as translator and artist Daisy Rockwell has named it in her new translation, Falling Walls (Penguin Modern Classics 2015). An accomplished critic and artist, Daisy will read short excerpts about Lahore and Jalandhar from the novel, and discuss the work with Ashk’s grandson Adamya Ashk, literary critic Manjula Padmanabhan, and moderator Manan Ahmed.

At once social history, artist’s bildungsroman, and city symphony, Falling Walls follows a young aspiring writer’s Sebaldian walk through middle-class 1930s Lahore and Jalandhar. Falling Walls is now newly available in an English translation twenty years in the making by Ashk’s biographer, Daisy Rockwell. The novel has often been compared to Proust’s In Search of Lost Time. As Daisy writes in Scroll.in: “Both document the experiences of one human being so exhaustively that they sweep up all the history, culture, and geography that lies within their vicinity. A personal history becomes the encyclopedic cultural history of an era. The map of Paris comes alive before us in Proust; in Ashk, it’s Jalandhar and Lahore… Above all, both novels explore the making of a writer, while simultaneously serving as the principal example of the real writer’s oeuvre.” Daisy is the author of The Little Book of Terror, a collection of essays and paintings on the global war on terror, and a novel, Taste, as well as translations of Ashk’s short stories, Hats and Doctors, and a forthcoming translation of Bhisham Sahni’s Tamas.

The panel will feature discussion of Ashk’s own life in these cities, his work’s significance for thinking about the City outside of Anglo-European frames, and how translations opens up new vistas of seeing the City. Joining Daisy will be Upendarnath’s grandson Adamya Ashk and novelist, playwright and comic artist Manjula Padmanabhan. The creator of the Suki comic strip, Manjula has written about dystopian organ harvesting (in her play Harvest, reviewed her in The New York Times) and a science fictional island of women and transexuals who have survived the apocalypse (in her novel The Island of Lost Girls). Moderated by AAWW homie and Columbia University Professor Manan Ahmed, contributor to Chapati Mystery and author of Where the Wild Frontiers Are: Pakistan and the American Imagination (Just World Books, 2011). Check out his essay about Timothy McVeigh’s white Christian terrorism in The Margins.