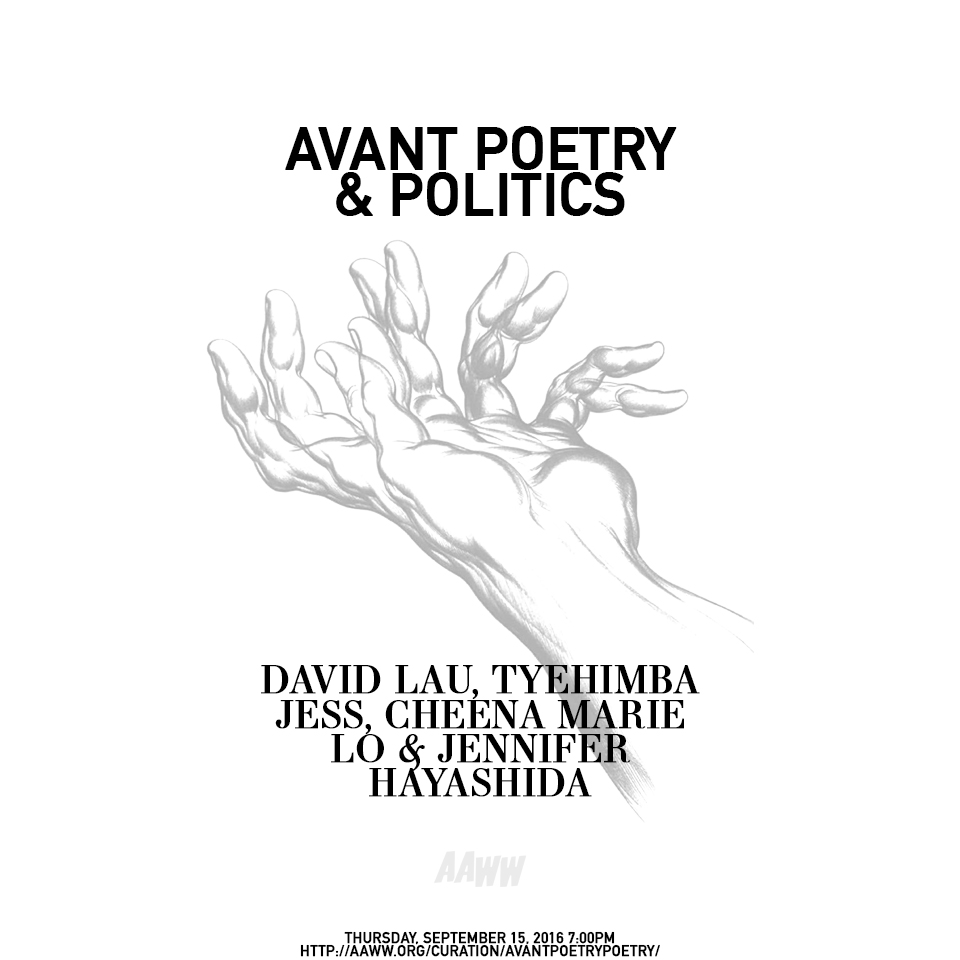 Join us for a special night featuring four poets on the cutting edge of avant-garde poetry and politics and whose work explores issues of gender, anti-capitalism, and race. We’re excited to host visits from out-of-town poets published by Commune Editions: David Lau, the editor of Lana Turner Journal, and Oakland-based genderqueer poet Cheena Marie Lo, whose debut book explores debt, sociality, gender, and work. They’ll be joined by Jennifer Hayashida, who is the translator from the Swedish of Athena Farrokhzad’s White Blight (Argos Books 2015) and Ida Börjel’s Miximum Ca’Canny The Sabotage Manuals (Commune Editions 2016). Commune Editions is an experimental poetry press that formed in reaction to resistance to the UC tuition hikes in 2009-11, the anti-police uprisings after the shooting of Oscar Grant, and Occupy Oakland. They’ll be joined by Tyehimba Jess, whose critically acclaimed new poetry collection Olio (Wave books 2016) presents a multimedia, archival, and musical history of black freedom fighters.

Tyehimba Jess’s new book Olio is “one of the most inventive, intensive poetic undertakings of the past decade” (Boston Globe). Mixing fact and fiction, archive and song, the book weaves together poetic forms with blues, worksongs, and church hymns to explore black performers from the Civil War to World War I. Olio is an effort to understand how they met, resisted, complicated, co-opted, and sometimes defeated attempts to minstrelize them. Jess’s first book of poetry, leadbelly, was a winner of the 2004 National Poetry Series, and named one of the best poetry books of the year by The Library Journal and Black Issues Book Review. A Cave Canem and NYU alumnus and veteran of the 2000 and 2001 Green Mill Poetry Slam Team, Jess has received fellowships from the NEA, Provincetown Fine Arts Work Center, Illinois Art Council, and the Whiting Foundation. Jess is an Associate Professor of English at College of Staten Island.

David Lau’s second poetry book Still Dirty: Poems 2009-2015 (Commune Editions 2016) critiques the toxicity of global capitalism while also referencing struggles from Occupy to Mexico’s Drug War, from Cairo to Athens. Raised in a self-described “Chicano-Chinese and Anglo household,” David Lau has been involved in the poetry, art, and activist communities of Los Angeles and the Bay Area for the past decade. A lecturer at UC Santa Cruz, he is editor of the journal Lana Turner, one of the premier journals of contemporary poetic theory. His work has been published in Boston Review, The American Reader, Armed Cell, New Orleans Review, Los Angeles Review of Books, and New Left Review.

Cheena Marie Lo’s debut poetry book A Series of Un/Natural/Disasters (Commune Editions 2016) explores recent disasters—both natural and unnatural, from mass incarceration to hurricanes Sandy and Katrina. The book deploys statistics, found language, and Google News search procedures to ask the question—as Cheena says in a Weird Sister interview—“Who gets to become more human? I thought a lot about incarcerated folks, poor communities, and communities of color. And the proliferation of news articles referring to the citizens of New Orleans as refugees, an Other in their own country.” An experimental exploration of incarceration, the book explores disaster, state failure, and precarity while asking what poetry can be. Born in Manapla, Philippines, Cheena Marie Lo is a genderqueer Oakland-based poet and the co-founder of the Manifest Reading Series, which features mainly queer experimental artists and writers. Their chapbooks include NO FILTER (Aggregate Space 2014) and Ephemera & Atmospheres (Belladonna* 2014). They currently coordinate a youth art program at California College of the Arts, and co-edit the literary journal, HOLD.

Jennifer Hayashida has translated the Swedish of White Blight (Argos Books, 2015), by the Iranian-Swedish feminist Athena Farrokhzad, and Karl Larsson’s Form/Force (Black Square Editions, 2015). Wendy Walters writes of White Blight: “The poem performs as intimately as memory, but with the direct language of confession or accusation. In this world, the family unit nurtures by prolonging disquietude, as there is no forgetting the ruptures of exile and immigration.” Her more recent translation for Commune Editions, Miximum Ca’ Canny the Sabotage Manuals by Ida Börjel, is at once a practical handbook, philosophical inquiry, and series of fables set in Putin’s Russia. The book interrogates saboteurs past and present via profound materials sourced from political pamphlets and factory workers’ diaries. Hayashida has received awards from, among others, PEN, the MacDowell Colony, the Jerome Foundation, and the New York Foundation for the Arts. She is Director of the Asian American Studies Program at Hunter College, CUNY, and serves on the board of the Asian American Writers’ Workshop.

This event is co-sponsored by The Poetry Project, Poets House, and The Hunter Creative Writing MFA Program.