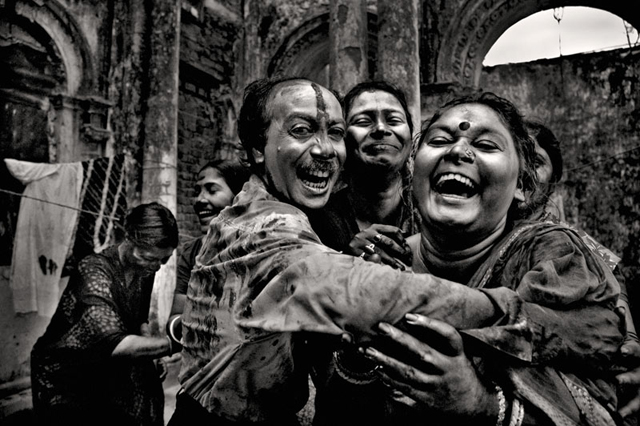 “I don’t want to be your icon of poverty/ Or a sponge for your guilt” wrote photographer and poet Shahidul Alam. This is one of the driving sentiments behind the exhibition Eyes On Bangladesh, which showcases the work of nine noted Bengali photographers together in New York City for the first time. This project offers a vision of Bangladesh stripped of stereotypes, and begins a dialogue between first and second generation Bangladeshis in the process. AAWW has asked a group of writers to use the photographs as prompts for original work.

Eyes on Bangladesh will be on display at Soundview Broadcasting from Wednesday, March 26 through Sunday, March 30, 2014. Exhibition hours are 10am – 10pm, and admission is free.

Celina Su was born in São Paulo and lives in Brooklyn. Her writing includes a poetry chapbook from Belladonna*, three books on the politics of social policy and civil society, and pieces in journals such as n+1, Aufgabe, and Boston Review. Her honors include the Berlin Prize and the Whiting Award for Excellence in Teaching. She teaches political science at the City University of New York and co-founded the Burmese Refugee Project in Thailand in 2001.

Wah-Ming Chang has received grants for fiction from the New York Foundation for the Arts, the Urban Artist Initiative, the Bronx Writers’ Center, and the Saltonstall Foundation for the Arts. Her fiction has been nominated for a Pushcart Prize, and has appeared in Mississippi Review, Arts & Letters Journal of Contemporary Culture, Kartika Review, and Swarm Quarterly; her nonfiction in Words without Borders and Open City, an online magazine published by the Asian American Writers’ Workshop; and her photography in Open City, Drunken Boat, and The New York Times. She is the managing editor of Melville House.

Meera Nair is the author of the story collection Video (Pantheon), which won the Asian American Literary Award and was a Washington Post Best Book of the Year, and a middle-grade children’s book Maya Saves the Day (Duckbill, India). Her stories and essays have appeared in the New York Times, National Public Radio’s Selected Shorts, the Threepenny Review, Calyx, National Post and in the anthologies, Delhi Noir (Akashic Books), Charlie Chan is Dead-2 (Penguin) and Money Changes Everything (DoubleDay).  Ms. Nair is the recipient of a MacDowell Fellowship and has twice won fellowships from the New York Foundation for the Arts. She is currently the Writer in Residence at Fordham University. Her current project, a novel titled Harvest, is a love story set in southern India against the background of the communist takeover in the 1950’s.

Sunil Yapa is a 2010 graduate of the Hunter College MFA program in New York City, where he worked with Colum McCann, Peter Carey, and Nathan Englander.  While at Hunter, he was selected for two Hertog Fellowships, working for Zadie Smith and Ben Marcus, as well as the Alumni Scholarship awarded to one fiction student every three years.  He served an internship as an editoral assistant at Esquire (2009-2010).  He has received scholarships to The Bread Loaf Writers’ Conference, The New York State Summer Writer’s Institute and The Norman Mailer Writers’ Center in Provincetown, as well as the 2012 inaugural Elaine M. Hirsch residency in Sifnos, Greece. His work has appeared in Hyphen Magazine, The Tottenville Review, The Multicultural Review, and Pindeldyboz: Stories that Defy Classification.  His story, “Pilgrims,” won The Best Asian American Short Story in 2010.  He is currently doing final revisions on a novel set during one day of anti-corporate protests in Seattle, November 1999, tentatively titled, Your Heart is a Muscle the Size of a Fist.

Sunu P. Chandy has devoted her fifteen year legal career to working for civil rights in the labor and employment context. She serves as a Senior Trial Attorney with the United States Equal Employment Opportunity Commission’s (EEOC), where she litigates employment discrimination cases in the public interest, and provides outreach so that the agency may partner with others who are also advocating for greater workplace justice. Sunu earned her J.D. from Northeastern University School of Law in Boston, Massachusetts. Sunu completed her MFA in Creative Writing (Poetry) in May 2013 from CUNY – Queens College. She has served on the Boards of Directors of several NYC organizations including ALP (the Audre Lorde Project), LeGal (the LGBT Bar Association) and SAWCC (the South Asian Women’s Creative Collective). Previous publications include work in the Asian American Literary Review, the Poets on Adoption blog, and in This Bridge We Call Home: Radical Visions for Transformation. Sunu lives in Brooklyn and is the proud adoptive mother, along with her partner, of a four year old daughter. Sunu counts herself among all the many activists who are working collectively for greater social justice in our society through organizing, through parenting, through litigation, through poetry.

Alaudin Ullah was one of the first South Asians to appear as a stand up comedian on national television, on channels including Comedy Central, BET, MTV, and PBS. Alaudin later joined as an inaugural member of the Public Theater’s Emerging Writers Group, where he developed his solo show “Dishwasher Dreams,” which has since been in festivals and workshops such as “New Works Now!” at the Public Theater, The New York Theater Workshop, New York Stage and Film, The Cape Cod Theater Fest, and Silk Road. His journey researching his father for the solo play was incorporated into Vivek Bald’s Bengali Harlem (2013, Harvard University Press). Alaudin’s voice was recently featured as the character of Hanuman in the award winning animated film Sita Sings the Blues, hailed by critics such as Roger Ebert of the Chicago Sun Times as “Two thumbs up!” and by A.O Scott of the New York Times ” a tour de force”.

Faheem Haider is an artist, art critic and a writer . His work tracks his relationship with the thirteen-year-old “War on Terror,” aka WoT, and the larger 100-year old family of Wars into which WoT was adopted without notarized papers.

Jordan Alam is a Bengali-American writer and social activist based out of New York City. She is currently preoccupied with trauma and healing, in her writing and her work in the social services. Her current major project is a novel on intergenerational trauma on Bengali and Bengali-American women affected by violence during the Bangladesh Independence War. She is also the founder of As[I]Am, an online magazine focused on Asian American arts and social justice work. Read more of her work and get in touch at her blog, The Cowation.