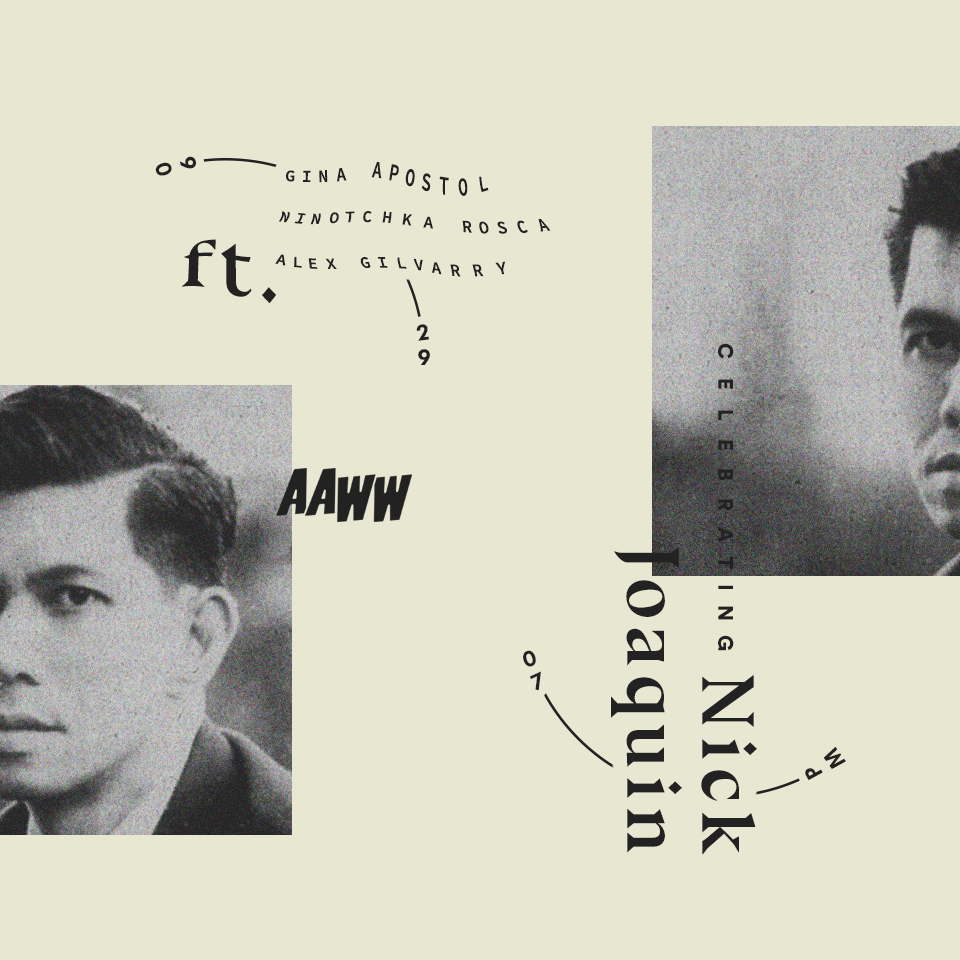 Celebrate the new edition of works by Nick Joaquin, one of the most important writers of the Philippines who is only now being published in the United States for the first time by Penguin Classics. Born in 1917, Joaquin wrote a surreal, anguished sentence that cast an ironic eye at colonialism’s longue durée and Catholic rites, both of which he depicted through magical realism and baroque splendor. We’ll feature readings and discussion by Pen Open Book winner Gina Apostol (who wrote the introduction to the new Joaquin collection), legendary activist and author Ninotchka Rosca (a friend of Joaquin’s), and Five-Under-35 winner Alex Gilvarry, author of From the Memoirs of a Non-Enemy Combatant. Melissa R. Sipin will moderate the discussion.

Nick Joaquin, Jessica Hagedorn writes, “is akin to García Márquez in the extravagant, surreal imagery of his stories, the fatalistic humor, and the intricate weaving of history and memory. His magical Macondo was the very real Philippines, in all its beauty, splendor and ruin.” The new Penguin Classics edition of Joaquin’s work includes his best-known story, “The Woman Who Had Two Navels,” the stories “May Day Eve” and “The Summer Solstice,” and a canonic play, “A Portrait of the Artist as Filipino.” Former AAWW board member Luis Francia class Joaquin an “intense chronicler of doubleness,” whose depiction of double consciousness took in “the patriarchal tone of Spanish and the feminist susurrations of Tagalog.”

Gina Apostol wrote the introduction to the Joaquin collection. Her first two novels, Bibliolepsy and The Revolution According to Raymundo Mata, both won the Juan Laya Prize for the Novel. Gina’s third novel, Gun Dealers’ Daughter, won the 2013 PEN/Open Book Award and was shortlisted for the 2014 William Saroyan International Prize. Her essays and stories have appeared in The New York Times, Los Angeles Review of Books, Foreign Policy, Gettysburg Review, and Massachusetts Review. Check out an excerpt from Gun Dealers’ Daughter in AAWW’s The Margins.

Ninotchka Rosca writes: “One cannot overstate what Nick Joaquin is to Philippine literature. Writing in English with the melody of Spanish and Tagalog, Joaquin was the first Filipino writer to focus on the impossible contradictions of a tribal civilization overlain by Spanish and American world views. And because that tribal civilization was woman-centered, Joaquin’s heroines are as complex, romantic and defiant as Madame Bovary and Anna Karenina.” Rosca is a legendary organizer for women’s liberation and is engaged in the study and codification of the theory and practice of transnational and intersectional feminism. Her two novels, State of War and Twice Blessed, are considered classics of modern Philippine literature, with the second receiving the American Book Award for Excellence in Literature.

Alex Gilvarry’s novel From the Memoirs of a Non-Enemy Combatant won the Hornblower Award for First Fiction, was named a Best New Voice 2012 by Bookspan, and selected by the New York Times as an Editor’s Choice. A National Book Foundation 5 Under 35 nominee, Alex has received fellowships from the Harry Ransom Center and the Norman Mailer Center. His essays and criticism have appeared in The Nation, Boston Globe, NPR’s All Things Considered, and many other publications. His second novel, Eastman Was Here, is forthcoming from Viking in August 2017. He is a professor of creative writing at Monmouth University.

Melissa R. Sipin was born and raised in Carson, CA. She won Glimmer Train‘s Fiction Open and the Washington Square Review‘s Flash Fiction Prize, and co-edited Kuwento: Lost Things (Carayan Press 2014). Her work is in Black Warrior Review, Prairie Schooner, Guernica Magazine, VIDA: Women in Literary Arts, Eleven Eleven Magazine, and PEN American Center, among others. She cofounded and is editor-in-chief of TAYO Literary Magazine, and her fiction has won scholarships and fellowships from The MacDowell Colony, Poets & Writers Inc., Vermont Studio Center, Kundiman, VONA/Voices Conference, Squaw Valley’s Community of Writers, and Sewanee Writers’ Conference. She is hard at work on a novel.