Contemporary Chinese poet Cai Tianxin gives a talk on the history of Chinese Poetry, reads from his own avant work, and discusses his place in the continuum of Chinese poetry with poetry legend Bob Holman. A columnist of the monthly magazine Book City in Shanghai, which is considered the Chinese New Yorker, and founder of Appolinaire, the leading underground literary magazine in China, Cai will offer a rare insight into contemporary Chinese poetry. 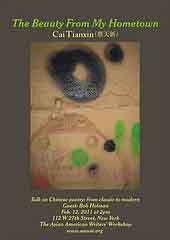 Cai Tianxin, considered to be among the most active young Chinese avant-garde authors, was born in Huangyan, in the South East of the People’s Republic of China, in 1963. He studied mathematics and received a doctorate with a dissertation on number theory from Shandong University in 1987. He has participated in international poetry festivals in Medellin, Colombia, and Rosario, Argentina, as well as in Zurich, Genoa, Vilenica, Slovenia, and Durban, South Africa. Since the publication of his first volume of poetry Bi An(t: Shore) in 1992, another three volumes have appeared in China. Since 1995, Cai Tianxin has been editing the biannual literary magazine Apollinaire, which has developed into one of the most important underground magazines in China. Cai Tianxin lives in Hangzhou, where he is a professor of mathematics at Zhejiang University. Cai’s poems have been translated into more than 20 languages, with books published in English, French, Spanish, Korean, Turkish and Serbo-Croatian. His most recent publication is the autobiography Little Memories: My Childhood in Mao’s Times. He also translates poems from English and Spanish into Chinese.

Bob Holman has published six books, most recently A Couple of Ways of Doing Something (Aperture, 2006), praise poems paired with photographs of artists by Chuck Close. He’s also put poetry on television, radio and the Web, producing The United States of Poetry for PBS, appearing on MTV’s Spoken Word Unplugged and HBO’s Def Poetry Jam, and serving as poetry commentator on WNYC and NPR. Currently, he teaches “Exploding Text: Poetry in Performance” at Columbia University and is the founder and proprietor of the Bowery Poetry Club.

Chinese Poetry: from Classical to Modern