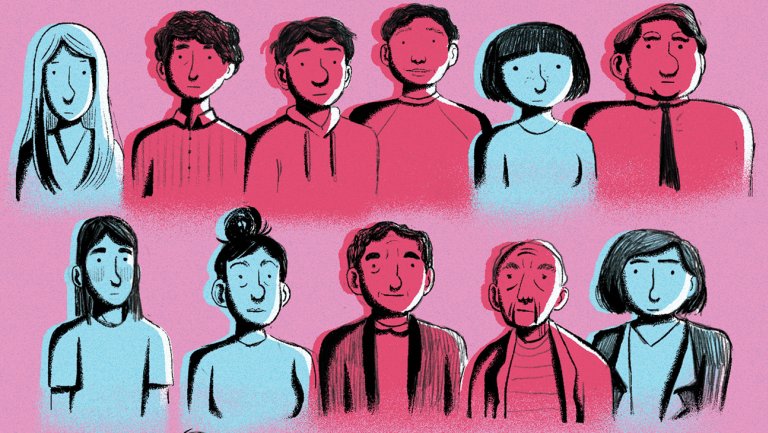 Come hear two storytellers who became friends while working in animation and are releasing absurdist graphic novels based off popular web comics: internet sensation Aminder Dhaliwal, whose debut graphic novel Woman World started off an an infectiously funny instagram comic about a group of women who gab and hang out in a post apocalyptic future where men are extinct, and Megan Nicole Dong, whose Sharky Malarkey follows the travails of a washed up, vain, yet insecure Shark actor named Bruce. Hear Aminder and Megan in conversation with Anne Ishii, comics publisher and Executive Director of The Asian Arts Initiative.

First serialized on Instagram to an audience of over 150,000, Woman World (Drawn & Quarterly, 2018) is a delightful imagining of a world where men have gone extinct. Aparna Nancherla writes, “Woman World is an overdue, welcome and slyly hilarious glimpse into the complex, heartfelt, and existential bonds between women of all stripes and makes. Each scene reminded me of the wild paradox of wanting to do good in the world, but also being undeniably human.” Aminder is a native of Brampton, Ontario and received a Bachelors of Animation from Sheridan College. She now lives in Los Angeles, where she is the Director at Disney TV Animation. Previously, she worked as a Storyboard Director at Cartoon Network and Storyboard Director on the Nickelodeon show Sanjay and Craig. Woman World was nominated for an Ignatz Award for Outstanding Online Comic.

Megan Nicole Dong’s Sharky Malarkey (Andrews McMeel, 2018) follows the adventures of Bruce, a washed-up shark actor, and a colorful assortment of dysfunctional people, animals, and inanimate objects. Bruce is equally outlandish and relatable—he’s vain but insecure; hotheaded but cowardly; craves attention but fears intimacy—his over-the-top antics are all too human. Based on Megan’s popular webcomic, Sketchshark, her debut collection of comics mines the absurd in everyday life. Megan is a marine biology enthusiast, comic artist, and animation professional based in Southern California. Best known for her Sketchshark comics, Megan has also worked as storyboard artist for DreamWorks Animation and Nickelodeon Studios. She was named one of Variety magazine’s Ten Animators to Watch in 2017.

Anne Ishii is the Executive Director of The Asian Arts Initiative in Philadelphia and co-editor of MASSIVE GOODS, a fashion brand, publisher, and creative agency representing queer and feminist artists from Japan. MASSIVE’s mission is to spread iconoclastic artwork addressing gender and sexuality to new audiences and new forms, from museum walls to bodies everywhere. Most recently, Anne interviewed MariNaomi and Rokudenashiko at our Japanese Feminist Comics event. You can read her interviews Jillian Tamaki, Michael DeForge, and comics publisher Annie Koyama in The Margins.