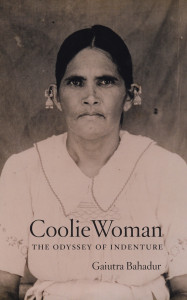 Join us as SAWCC celebrates the publication of Gaiutra Bahadur‘s book Coolie Woman: The Odyssey of Indenture (U of Chicago Press 2013) in a multimedia evening of text, image, and song.

Guyanese are the second largest immigrant group in Queens and among the five largest in New York City, and their story of coming to America is tightly braided with their ancestral story of leaving India. In Coolie Woman, Bahadur pursues her great-grandmother’s story of indentured servitude in Guyana and recovers the lost voices and buried histories of other indentured women, whose passages were both transgressive acts of reinvention and unsuspecting exile.

Bahadur tells their story in a book that author Junot Diaz calls “an astonishing document… both a historical rescue mission and a profound meditation on family and womanhood.” Join as as we celebrate the publication of Coolie Woman: The Odyssey of Indenture in a multimedia evening of text, image, and song.

Gaiutra Bahadur is an American journalist and book critic. Her reporting, criticism, and essays have appeared in the New York Times Book Review, Washington Post Book World, the Nation, Virginia Quarterly Review, the (London) Observer, and Ms., among other publications. A former daily newspaper staff writer, Gaiutra has told the stories of asylum seekers and immigrants in Philadelphia and its suburbs and has reported from Baghdad, Iraqi refugee outposts in Syria and Jordan, and the U.S.-Mexico border. Born in Guyana, she immigrated to the United States—to Jersey City, NJ—with her family at the age of six. She was a Nieman Fellow at Harvard during the 2007-2008 academic year and, in 2013, won grants from the New Jersey State Council on the Arts and the Barbara Deming Memorial Fund, a national feminist arts organization.

This SAWCC program is co-sponsored by the Asian American Writers’ Workshop.

Coolie Woman: The Odyssey of Indenture

** POSTPONED** come meet me at the juncture of knee & history: Complicating (Auto)biographical Poetics, A Workshop with George Abraham
George Abraham
As writers in diaspora, the western imagination of the “lyric I” can impose harmful and reductive gazes unto our poetry. How do we wrestle with these narratives under the failed and limited imagination of empire? In this generative and discussion-based workshop led by poet George Abraham, we will look beyond respectability, linearity, and digestibility.
October 26 7:00 PM