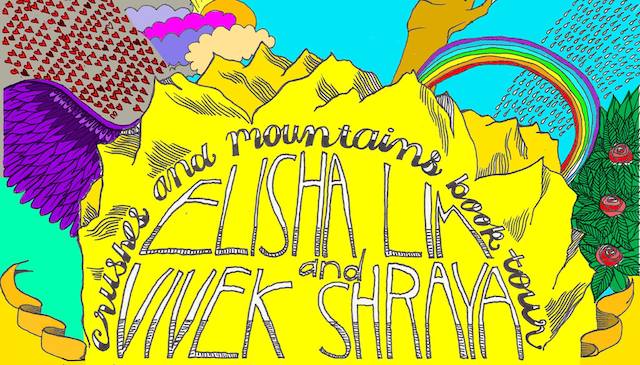 Canadian-based artists Elisha Lim and Vivek Shraya bring their latest work to New York City with queer prayers, songs, films, and readings from their new books 100 Crushes and She of the Mountains. We’re co-hosting the event at Barnard College with Barnard Library and Academic Information Services and the Barnard LGBTQ YA collection.

ELISHA LIM‘s debut graphic novel 100 Crushes is an infatuated journey through four continents of queer communities. Lim’s arresting portraits are accompanied by heartfelt anecdotes about butches, sissies, catholic convent girls, jealousy, suits and ties, and love. In their work, Lim portrays the creativity, tenacity and power of being neither straight, nor white, nor cis-gendered. They have also successfully advocated for Canadian gay media to adopt the gender neutral pronoun ‘they’. They have exhibited and curated art and videos internationally, including the debut solo of Toronto’s notorious Feminist Art Gallery, and were awarded Best Emerging Director at the 2014 Inside Out film festival. They advise on racial and gender stereotypes in lectures, on juries, and on UN panels, and directed Montréal’s first Racialized Pride Week in 2012. Their comics include the Bitch Magazine acclaimed Sissy Calendar, The Illustrated Gentleman, and most notably, 100 Butches, a collection of portraits and anecdotes about masculine queers, introduced by New York Times bestselling author Alison Bechdel.

VIVEK SHRAYA‘s She of the Mountains is a beautifully rendered illustrated novel that weaves a passionate, contemporary love story between a man and his body, with a re-imagining of Hindu mythology. Both narratives explore the complexities of embodiment and the damaging effects that policing gender and sexuality can have on the human heart. Shraya is a multimedia artist, working in the mediums of music, performance, literature, and film. His first book, God Loves Hair, was a Lambda Literary Award finalist first published in 2011 and reissued in a new edition from Arsenal Pulp Press in 2014. Winner of the We Are Listening International Singer/ Songwriter Award, Vivek has released albums ranging from acoustic folk-rock to electro synth-pop. His most recent is “Breathe Again,” a tribute to the songs of R&B artist Babyface. His short film, What I LOVE about being QUEER, has expanded to include an online project and Lambda Literary Award-nominated book with contributions from around the world.