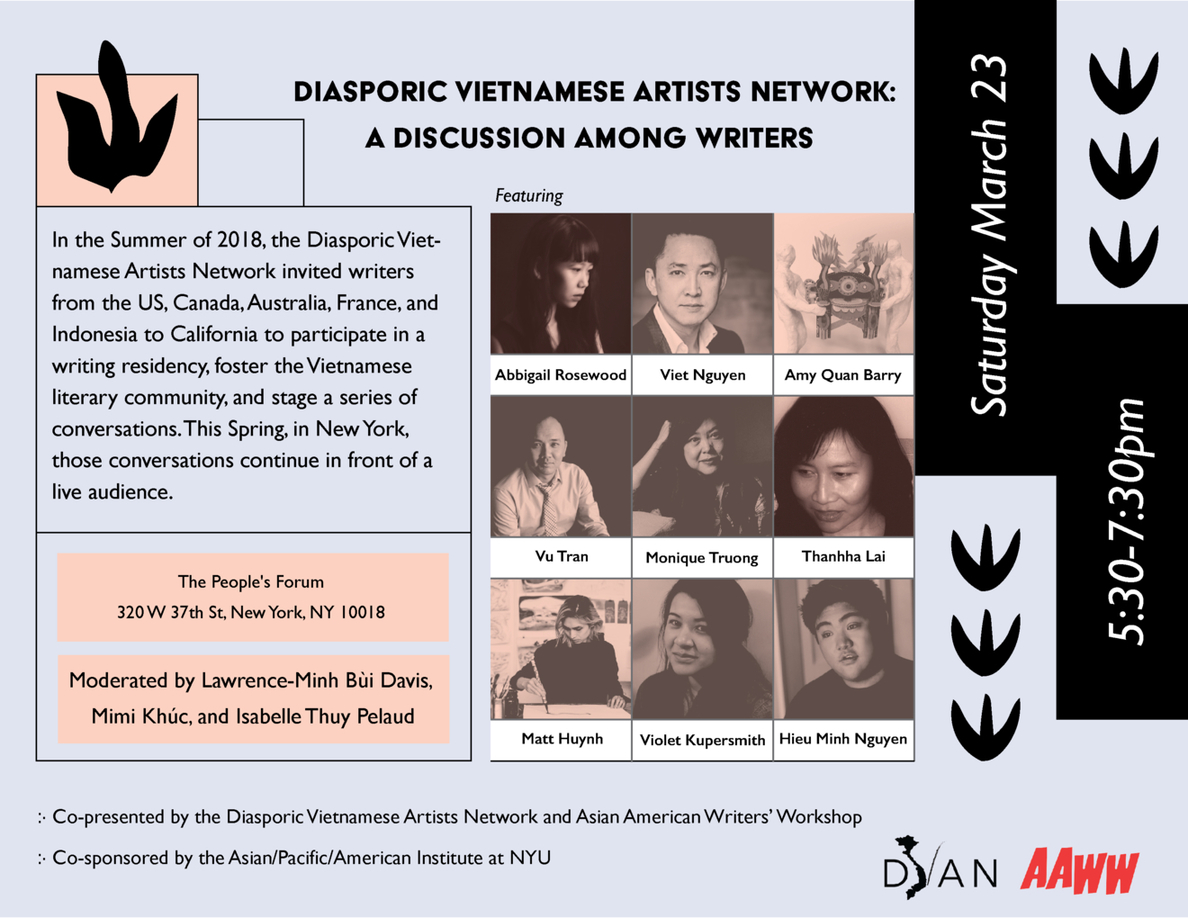 Co-presented by the Diasporic Vietnamese Artists Network and Asian American Writers’ Workshop. Co-sponsored by the Asian/Pacific/American Institute at NYU.

RESERVE A SEAT
$5 SUGGESTED DONATION | OPEN TO THE PUBLIC

Viet Thanh Nguyen is University Professor, Aerol Arnold Chair of English, and Professor of American Studies and Ethnicity at USC. His novel The Sympathizer (2015) is a New York Times bestseller and won the Pulitzer Prize for fiction (along with many others awards). His other books are Nothing Ever Dies: Vietnam and the Memory of War (2016), and Race and Resistance: Literature and Politics in Asian America (2002). His current book is the bestselling short story collection, The Refugees (2017). He is also the editor of the collection The Displaced: Refugee Writers on Refugee Lives. He is also the co-director of DVAN and a contributing opinion writer for the New York Times.

Matt Huynh is a visual artist and storyteller based in New York City. His bold brush and ink paintings are informed by Eastern sumi-e ink traditions and Western comic books. His animation, paintings and comics interrogate war, diaspora, refugees, asylum seekers and migrant communities. Huynh’s work has been exhibited by the MoMA, The Smithsonian, The Sydney Opera House and New York Historical Society.

Hieu Minh Nguyen is the author of This Way to the Sugar (Write Bloody Press, 2014) and Not Here (Coffee House Press, 2018). His first collection of poetry was a finalist for both a Minnesota Book Award and a Lambda Literary Award. In 2018, Hieu was awarded the Ruth Lily and Dorothy Sargent Rosenberg Fellowship from the Poetry Foundation. He is a poetry editor for Muzzle Magazine. His work has also appeared or is forthcoming in Poetry Magazine, the New York Times, Best American Poetry, the Academy of American Poets, BuzzFeed, and elsewhere. He lives in Minneapolis and attends the MFA Program for Writers at Warren Wilson College.

Vu Tran was born in Vietnam and raised in Oklahoma. His first novel, Dragonfish, was a NY Times Notable Book and a San Francisco Chronicle Best Books of the Year. He is the recipient of a Whiting Award and an NEA Fellowship, and his short fiction has appeared in the O. Henry Prize Stories, the Best American Mystery Stories, and other publications. He is currently a criticism columnist for the Virginia Quarterly Review and an Assistant Professor of Practice in the Arts at the University of Chicago.

Abbigail N. Rosewood was born in Vietnam, where she lived until the age of twelve. She holds an MFA in creative writing from Columbia University. An excerpt from her first novel won first place in the Writers Workshop of Asheville Literary Fiction Contest. She lives in New York. If I Had Two Lives is her first novel.

Amy Quan Barry was born in Saigon and raised on Boston’s north shore. Quan Barry directs the MFA Program in Creative Writing at the University of Wisconsin-Madison. The author of the novel She Weeps Each Time You’re Born as well as four poetry books. Barry received her MFA from the University of Michigan, and her work has appeared in such journals as Ms. and The New Yorker. Barry received NEA Fellowships in both fiction and poetry; in 2016, she served on the final jury in selecting the winners of the NEA in Literature.

Isabelle Thuy Pelaud teaches in Asian American Studies at San Francisco State University. She is the author of This Is All I Choose To Tell: History and Hybridity in Vietnamese American Literature (2011) and co-editor of award winning Anthology of Art and Literature by Southeast Asian Women in the Diaspora: Troubling Borders (2014). She is the co-director of DVAN.

Violet Kupersmith is the author of The Frangipani Hotel (Spiegel & Grau 2014), a collection of supernatural short stories about the legacy of the Vietnam War, and a forthcoming novel about ghosts and American expats in modern-day Saigon. She was the 2015-2016 David T.K. Wong Creative Writing Fellow at the University of East Anglia, and her writing has appeared in No Tokens Journal, The Massachusetts Review, Word Vietnam, and The New York Times Book Review

Thanhhà Lại was born in Vietnam and lives in New York.  She is the author of Inside Out & Back Again  and Listen, Slowly.  Her third novel, Butterfly Yellow, will be published this fall.

Mimi Khùc, PhD, is a writer, scholar, and teacher of things unwell. She is also the Managing Editor of The Asian American Literary Review (AALR) and guest editor of Open in Emergency: A Special Issue on Asian American Mental Health.