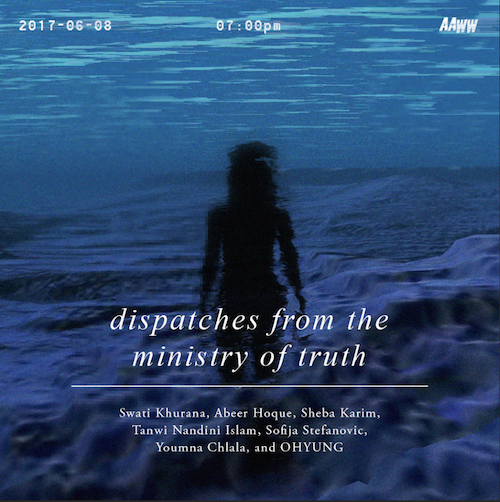 *This event does not take place at AAWW.

On the publication anniversary of George Orwell’s 1984, come listen to performances by Swati Khurana, Abeer Hoque, Sheba Karim, Tanwi Nandini Islam, Sofija Stefanovic, Youmna Chlala and OHYUNG about truth, love, and other tortures. June 8 is also World Oceans Day and there will be sea themed trivia to win one of the authors’ books! $5 suggested donation with all proceeds going to Oceana.org.

Swati Khurana was born in New Delhi, raised in the Hudson Valley, and lives in the Bronx. She has been published in The New York Times, Guernica, and her art has been shown at Brooklyn Museum of Art, DUMBO Arts Festival, Smithsonian, and elsewhere. She was a founding member of the South Asian Women’s Creative Collective. She is working on her first novel and going through the Twin Peaks reboot very, very slowly.

Abeer Y. Hoque is a Nigerian born Bangladeshi American writer and photographer. She likes sorting and filing, disco lights, and fleece. Her books include a travel photography and poetry monograph (The Long Way Home, 2013), a collection of linked stories, poems, and photographs (The Lovers and the Leavers, 2015), and a memoir (Olive Witch, 2017). See more at olivewitch.com.

Sheba Karim’s second YA novel, That Thing We Call a Heart (Harper Collins 2017), features young love, Urdu poetry, Radiohead, and pie and received a starred Kirkus review. Her next YA novel, The Road Trip Effect, is out in 2018. She has an MFA from the Iowa Writers’ Workshop and lives in Nashville, TN, where she tries (and often fails) to limit her hot chicken consumption to once a month.

Tanwi Nandini Islam is the author of Bright Lines (Penguin 2015), a finalist for the Center for Fiction First Novel Prize, Edmund White Debut Fiction Award, the Brooklyn Eagles Literary Prize, and the inaugural selection of the First Lady of NYC’s Gracie Book Club. Nandini Islam is the founder of Hi Wildflower, a fragrance and beauty house. A graduate of Brooklyn College MFA and Vassar College, she lives in Brooklyn, NY.

Sofija Stefanovic is a Serbian-Australian writer living in the United States. She hosts the monthly literary salon Women of Letters New York. She’s a regular storyteller with The Moth and has traveled around the United States performing with their MainStage. She’s writing a memoir called Miss Ex-Yugoslavia featuring warlords, beauty queens and everything in between (Atria Books, 2018).

Youmna Chlala is a writer and an artist born in Beirut & based in New York. Her work has been exhibited at Dubai Art Projects, Performa Biennial 11, Rotterdam International Film Festival, Art In General, and Angela Meleca Gallery. A Founding Editor of Eleven Eleven {1111} Journal of Literature and Art and an Associate Professor at the Pratt Institute, she is the author of the poetry collection, The Paper Camera, forthcoming from Litmus Press.

OHYUNG is a Brooklyn-based film composer and musician who makes rap music focusing on race and identity. He has performed at SOB’s, BAM’s Next Wave Festival with drag artist/poet Wo Chan, and collaborated with KOOL AD on his mixtape PEYOTE KARAOKE.

Dispatches from the Ministry of Truth