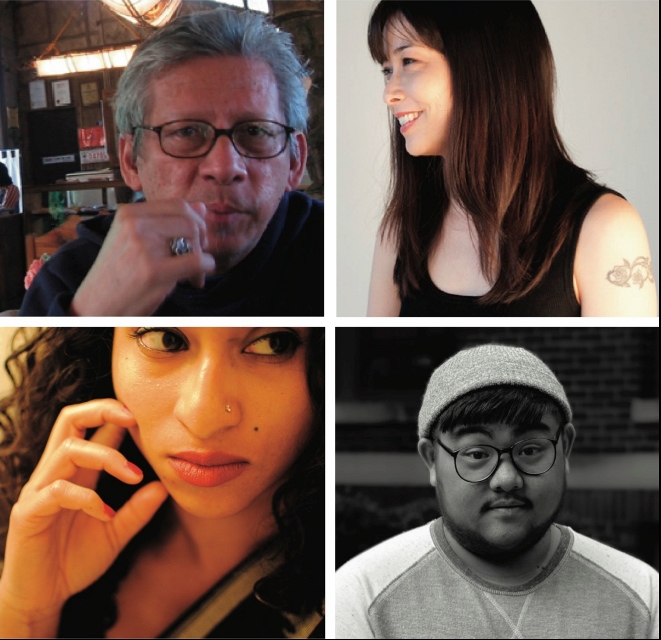 As part of the 2014 PEN World Voices Festival and NYU Literary Mews, the Asian/Pacific/American Institute at NYU presents a reading of avant-garde Asian/Pacific American writing that is on the edge. Challenging distinctions between genre and form, these texts push the boundaries of literature, poetry, and history to defy categorization. Featuring April Naoko Heck (A Nuclear Family), Tarfia Faizullah (Seam), Luis H. Francia (Eye of the Fish and Museum of Absences), and Hieu Minh Nguyen (This Way to the Sugar). Moderated by Ken Chen.

April Naoko Heck was born in Tokyo and moved to the US with her family when she was seven. A Kundiman Fellow, she has been awarded residencies from the Virginia Center for the Creative Arts and Vermont Studio Center. A Nuclear Family, her first collection of poems, is due in March 2014 and is available for pre-order on Amazon.

Tarfia Faizullah is the author of Seam (Southern Illinois University Press, 2014), winner of the 2012 Crab Orchard Series in Poetry’s First Book Award. Her poems have appeared or are forthcoming in Ploughshares, The Missouri Review, Passages North, New Ohio Review, Crab Orchard Review, The Southern Review, Mead, Poetry Daily, Mid-American Review, and elsewhere. She is the recipient of an AWP Intro Journals Award, a Dorothy Sargent Rosenberg Prize, the 2012 Copper Nickel Poetry Contest, the Bread Loaf Writers’ Conference Margaret Bridgman Scholarship in Poetry, a scholarship from the Sewanee Writers’ Conference, a Fulbright fellowship, and other honors. A Kundiman fellow, she is a graduate of the Virginia Commonwealth University program in creative writing.

Luis H. Francia is the author of several poetry collections, among them The Beauty of Ghosts, Museum of Absences, The Arctic Archipelago and Other Poems, and his latest, Tattered Boat. His memoir, Eye of the Fish: A Personal Archipelago, won both the 2002 PEN Open Book and the Asian American Writers awards. RE: Reviews, Reflections, and Recollections is his latest nonfiction work. His poetry has been included in such anthologies as Language for a New Century and Love Rise Up!  He is on faculty of A/P/A Studies at New York University and Hunter College, and teaches creative writing in nonfiction and poetry at the City University of Hong Kong. He writes an online column, “The Artist Abroad,” for the Philippine Daily Inquirer.

Hieu Minh Nguyen was born and raised in Saint Paul, Minnesota, by a single, Vietnamese American, mother. He is the author of This Way to the Sugar (Write Bloody Press, 2014). He is a curator for “Inside Voices” a reading series presented by Button Poetry, an organization dedicated to publishing, producing, and promoting poetry. His work has also appeared or is forthcoming in publications such as The Journal, PANK, Anti-, Muzzle, decomP, Indiana Review, and other journals. He also works at a haberdashery.

Ken Chen is the Executive Director of The Asian American Writers’ Workshop and the 2009 recipient of the Yale Series of Younger Poets Award, the oldest annual literary award in the United States, for his debut poetry collection Juvenilia. He is one of the founders of CultureStrike, a national artist movement on immigration which organized 300 writers to boycott Arizona in the wake of SB1070 and brings writers to the immigration frontlines in this country. His writing has appeared or been recognized in Best American Essays 2006, Best American Essays 2007 (Honorable Mention), the Boston Review, CNN.com, Fence, and Art Asia Pacific. He has received fellowships from the New York Foundation for the Arts and the Bread Loaf Writers conference.

On The Edge: Readings from the Asian/Pacific American Avant-garde