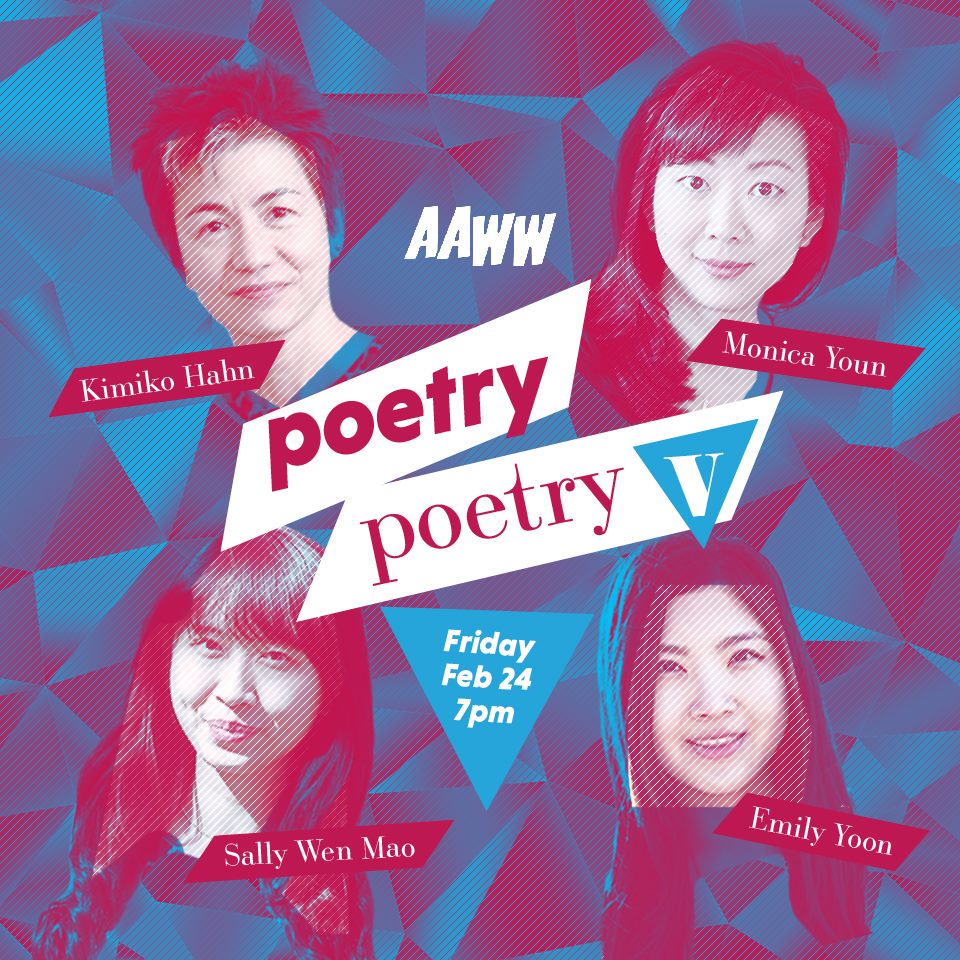 Kimiko Hahn has said: “I’ve taken years to imagine an Asian American aesthetic. I think it’s a combination of many elements—a reflection of Asian form, an engagement with content that may have roots in historical identity, together with a problematic, and even psychological, relationship to language.” Kimiko Hahn is the author of ten collections of poetry, including The Narrow Road to the Interior (W.W. Norton, 2006); The Artist’s Daughter (2002); Mosquito and Ant (1999); Volatile (1998); The Unbearable Heart (1995), which received an American Book Award; and Toxic Flora (2010), which won AAWW’s Asian American Literary Award. She has also received fellowships from the Guggenheim Foundation, the National Endowment for the Arts, NYFA, as well as a Lila Wallace-Reader’s Digest Writers’ Award, the Theodore Roethke Memorial Poetry Prize, and an Association of Asian American Studies Literature Award. She is a Distinguished Professor in the English department at Queens College/CUNY and lives in New York. Read Kimiko Hahn’s poems in AAWW’s The Margins, including “Dream of Shoji” and “Phototactic Tactics.”

Sally Wen Mao is the author of Mad Honey Symposium (Alice James Books, 2014), the winner of the 2012 Kinereth Gensler Award, a Poets & Writers Top Ten Debut of 2014, and a Publishers Weekly Top Ten Anticipated Pick of Fall 2014. Her second book, Oculus, is forthcoming from Graywolf Press in 2019. The winner of a 2017 Pushcart Prize, she has received fellowships from Kundiman, Bread Loaf Writers Conference, Jerome Foundation, Hedgebrook, Vermont Studio Center, and Saltonstall Foundation, She was the 2015-2016 Singapore Creative Writing Residency Writer-in-Residence at National University of Singapore, and is currently a 2016-2017 Cullman Center Fellow at the New York Public Library. Check out Sally’s poems in AAWW’s The Margins: “Lavender Town” and “Apiology, with Stigma.”

Born in Busan, Republic of Korea, Emily Jungmin Yoon serves as the Poetry Editor for The Margins, the literary magazine of the Asian American Writers’ Workshop, and is a PhD student studying Korean literature in the Department of East Asian Languages and Civilizations at the University of Chicago. She received her MFA in Creative Writing at New York University, where she served as an Award Editor for the Washington Square Review and as a Starworks Fellow. Her work is forthcoming in The New Yorker and Poetry. Read some of Emily Yoon’s poems on AAWW’s The Margins, as well as her interview about hysterical translation with poet Don Mee Choi.

Monica Youn’s most recent book Blackacre (Graywolf Press, 2016) was longlisted for the 2016 National Book Award in Poetry and short-listed for the PEN Open Book Award and the National Book Critics Circle Award. Her other books include Barter (Graywolf Press, 2003); and Ignatz (Four Way Books, 2010), which was a finalist for the National Book Award. Her poems have appeared in numerous journals and anthologies, including the New Yorker, the Paris Review, and the New York Times Magazine, and she has been awarded fellowships from the Library of Congress and Stanford University. A former attorney, she now teaches poetry at Princeton University and serves as a Board of Director for the Asian American Writers’ Workshop. Read Monica Youn’s poignant response to the Yi-Fen Chou controversy in AAWW’s The Margins.