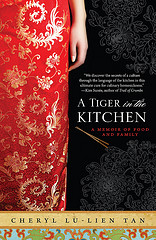 Join us for a delectable evening with NYC food and fashion writer Cheryl Tan and NY Times Urban Foraging Columnist Ava Chin as they explore the relationship between food, family, and memory. Cheryl Tan will read from and discuss her new memoir, A Tiger in the Kitchen: A Memoir of Food and Family, which Kirkus Review places in the lineage of “two different memoirs, Maxine Hong Kingston’s The Woman Warrior and Julie Powell’s Julie & Julia.” After years at the Wall Street Journal, Tan journeyed home to Singapore to spend a year learning to cook the recipes she had taken for granted as a child, learning from her aunties hidden truths about her family and about herself that she would never otherwise have discovered. And you can taste some of the Singaporean treats in the memoir with food provided by Cafe Asean!

Cheryl Lu-Lien Tan is a New York City-based food and fashion writer whose work has appeared in theWall Street Journal, New York Times, InStyle, Marie Claire, Every Day with Rachael Ray, Family Circle, Baltimore Sun, Chicago Tribune, Washington Post,and many other outlets. She is a regular contributor to the Atlantic Food Channel. Born and raised in Singapore, Tan graduated from Northwestern University and completed two residencies at Yaddo, the artists’ colony. A Tiger in the Kitchen is her first book. Follow her at: twitter.com/cheryltan88.

Ava Chin writes the Urban Forager column for theNew York Times City Room, and is the editor of the anthology Split: Stories from a Generation Raised on Divorce, described by Booklist as a “brave and insightful collection of essays.” She has written for theLos Angeles Times, the Village Voice, and Spin magazine, among others. She received her Masters from the Writing Seminars at Johns Hopkins, and her PhD from the University of Southern California; she is an Assistant Professor in Creative Non-fiction and Journalism at the College of Staten Island.

Home-Cooked Meals: A Tiger In The Kitchen