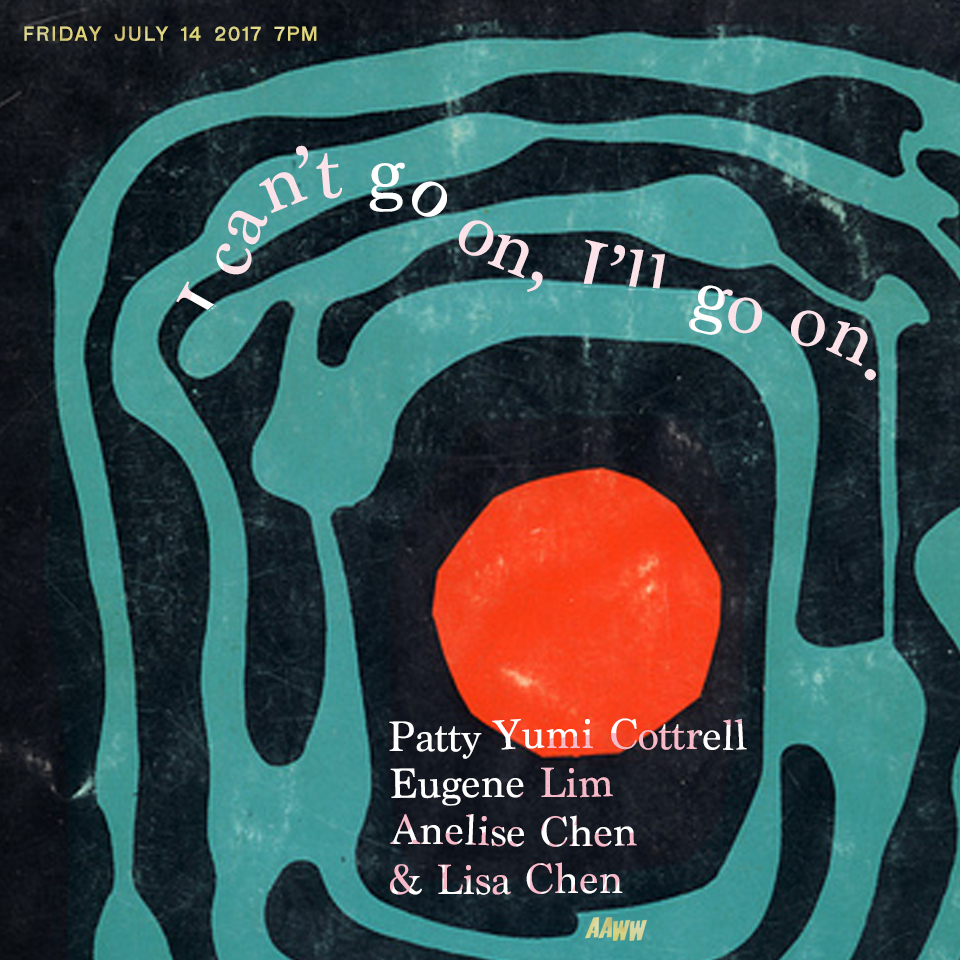 Do you ever feel like your life is in a constant state of crisis? Do you feel like, nevertheless, you persist? Come see three thrilling experimental novelists whose new books are about pushing forward against life-killing forces, whether it’s capitalism, the political status quo, or more existential threats like grief and suicide. Novelists Patty Yumi Cottrell, Eugene Lim, and Anelise Chen all navigate the universe of crisis–all with a touch of bleak literary experimentation that would make Samuel Beckett proud! Moderated by poet Lisa Chen.

In Patty Yumi Cottrell’s debut work, Sorry to Disrupt the Peace: A Novel (McSweeney’s, 2017), Korean adoptee Helen Moran is accepting an Ikea delivery order when she earns that her adoptive brother has died. The book follows her investigation of his suicide and the grief that comes with it. Helen Oyemi writes, “Patty Yumi Cottrell’s prose does so many of my favorite things–some too subtle to talk about without spoiling, but one thing I have to mention is the way in which her heroine’s investigation of a suicide draws the reader right into the heart of this wonderfully spiky hedgehog of a book and then elbows us yet further along into what is ultimately a tremendously moving act of imagination.” Check out Brandon Shimoda’s interview with Patty in AAWW’s The Margins here.

Eugene Lim’s Dear Cyborgs (FSG Originals, 2017) begins with two Asian American boys bonding over superhero comics–but the book then zig-zags towards alternate universes and strange realities of clairvoyance and cyborgs. Despite such fabulist inventions, the book asks what it means to resist in the age of seemingly invulnerable capitalism. In answering this question, Dear Cyborgs–in the words of The New Yorker’s Hua Hsu (an AAWW Board member)–makes “revolution seem like the most natural thing possible.” Eugene previously wrote the novels Fog & Car (Ellipsis Press, 2008) and The Strangers (Black Square Editions, 2013). The librarian at Hunter High School, where he assists with AAWW youth programs there, he runs Ellipsis Press, and lives in Jackson Heights, NY, with Joanna and Felix.

Blending elements of memoir and sports writing, Anelise Chen’s So Many Olympic Exertions (Kaya Press, 2017) is an experimental work that perhaps most resembles what the ancient Greeks called hyponemata, or “notes to the self,” in the form of observations, reminders and self-exhortations. The book follows graduate student Athena Chen who hears that her college friend has committed suicide. A former Open City Fellow of the Asian American Writers’ Workshop, she is now fiction editor of AAWW’s online publication The Margins. Read her writing about Tao Lin and interviewing the owner of a Chinatown dumpling shop. She teaches writing at Columbia University.

Lisa Chen is the author of the poetry collection Mouth (Kaya Press 2007). Sesshu Foster writes, “Lisa Chen’s poetry pleases and astonishes me with that display of thrilling senses—other spirits appear unexpectedly in hovering bright mid-air, ordinal forces and natural realities indexed at play in the moment, articulated in rapt intelligence of language.” Read her incredible short story “The Last Living Aztec” in AAWW’s The Margins.