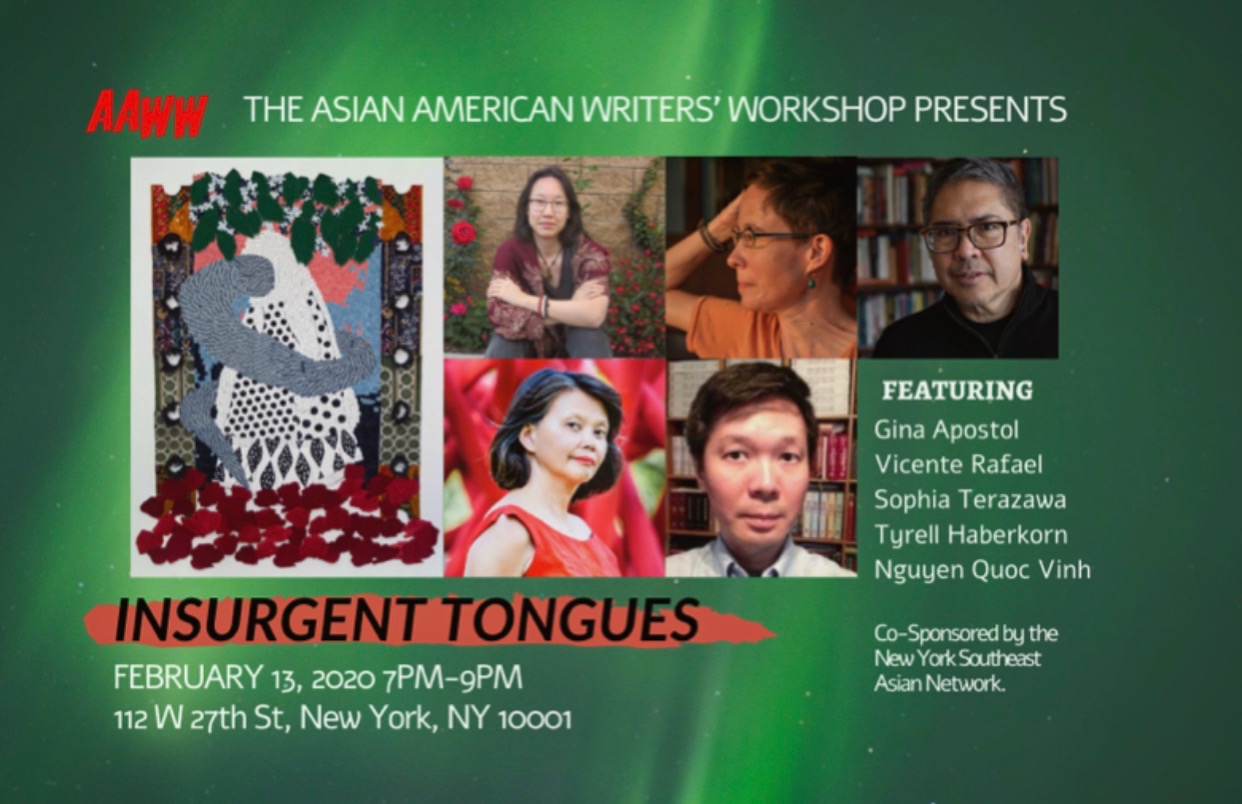 Join us for a special night of readings and discussion to launch a new folio in the Transpacific Literary Project: Insurgent Tongues. In efforts to dismantle the languages of domination, contributors to the folio and guests will share their distinct approaches to probing the insurgent nature of language and languages of (counter)insurgency.

Tyrell Haberkorn, Sophia Terazawa, Nguyen Quoc Vinh, and Gina Apostol will read from their individual works and join in a group discussion moderated by Vicente Rafael, author of Motherless Tongues: The Insurgency of Language amid Wars of Translation.

No one will be turned away for lack of funds. All donations go to AAWW public programs. The Asian American Workshop is a national nonprofit dedicated to the creation, development, publication, & dissemination of Asian American literature.

Starting from the history of militarized translation practices during Cold War-era conflicts in Southeast Asia, the group will discuss relationships between war and translation today, emphasizing language’s resistance to weaponization and the “irreducibly insurgent element in every language that undermines attempts at mastery.”

This event is co-sponsored by the New York Southeast Asian Network.

TYRELL HABERKORN researches state violence and dissident cultural politics in Thailand and is Associate Professor of Southeast Asian Studies in the Department of Asian Languages and Cultures at the University of Wisconsin-Madison. She is the author of Revolution Interrupted: Farmers, Students, Law and Violence in Northern Thailand (University of Wisconsin Press, 2011), which rethinks the meaning of revolution in terms of legal rather than armed struggle, and In Plain Sight: Impunity and Human Rights in Thailand (University of Wisconsin Press, 2018), a new history of post-absolutist Thailand written through the lens of impunity. She is currently translating the memoir of Prontip Mankhong, a cultural activist and former Thai political prisoner, and writing a history of anarchism and the imagination of democracy in Thailand. Tyrell also writes and translates frequently about Southeast Asia for a broad, public audience, including Dissent, Foreign Affairs, Mekong Review, Los Angeles Review of Books, openDemocracy, and Prachatai. Her work has been funded by fellowships from Fulbright, the Australian Research Council, the Association for Asian Studies, the Radcliffe Institute for Advanced Study, and the Einstein Forum.

SOPHIA TERAZAWA is a poet of Vietnamese-Japanese descent. She is the author of two chapbooks, I AM NOT A WAR (Essay Press) and Correspondent Medley (Factory Hollow Press)

GINA APOSTOL‘s fourth novel, Insurrecto, was a finalist for the Dayton Literary Peace Prize, longlisted for the Dublin IMPAC Prize, and named by Publishers’ Weekly one of the Ten Best Books of 2018. Her third book, Gun Dealers’ Daughter, won the 2013 PEN/Open Book Award and was shortlisted for the William Saroyan International Prize. Her first two novels, Bibliolepsy and The Revolution According to Raymundo Mata, both won the Juan Laya Prize for the Novel (Philippine National Book Award). Her essays and stories have appeared in The New York Times, Los Angeles Review of Books, Foreign Policy, Gettysburg Review, Massachusetts Review, and others. She lives in New York City and western Massachusetts and grew up in Tacloban, Philippines. She teaches at the Fieldston School in New York City.

VICENTE L. RAFAEL is the Giovanni and Amne Costigan Endowed Professor of History at the University of Washington, Seattle. He is the author of several works on the cultural and political history of the Philippines, including Contracting Colonialism, White Love and Other Events in Filipino History, The Promise of the Foreign, and Motherless Tongues: The Insurgency of Language Amid Wars of Translation, all published by Duke University Press. He has also edited Discrepant Histories: Translocal Essays in Filipino Cultures (Temple) and Figures of Criminality in Indonesia, the Philippines and Colonial Vietnam (Cornell), and wrote the Introduction for Nick Joaquin’s The Woman Who Had Two Navels and Tales of the Tropical Gothic (Penguin Classics).

* The space is wheelchair accessible. No stairs. Direct elevator from ground floor to 6th floor.

* We strongly encourage all participants of the space/event to be scent-free.