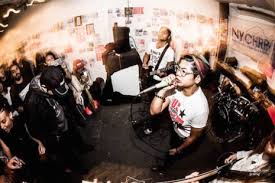 Learn about your rights while singing your heart out! Join us for a night of strengthening and celebrating our resistance as Attorney Jackie Mariano leads a Know Your Rights training on immigration and political demonstrations. Material Support, an agit-punk band which Mariano fronts, shares the stage with their lead singer to ground us in the necessity of bold, collective action through their unapologetic brand of pinoy hardcore punk.

RESERVE A SEAT
$5 SUGGESTED DONATION | OPEN TO THE PUBLIC

Jackie Mariano is a community-based attorney hailing from Queens, NY. Her legal career is rooted in her dedication to fight for and alongside immigrant communities to seek justice from exploitation and build dignified lives for themselves and their families. As a longtime New York City activist, Mariano serves as the co-chairperson of the National Lawyers Guild International Committee and the chairperson of New York Committee for Human Rights in the Philippines (NYCHRP).

Described as “Queens’ New Agitprop Poets”, Material Support is a Filipina-fronted agit punk band from Queens, NY, who are agitated by state repression, government corruption, and patriarchy. Material Support’s anti-imperialist punk anthems blast searing lyrics like, “Bougie ass white girl / Peace Corps to my homeland / offers people band aids / for the blisters on their feet” as heard in their iconic “Bougies Ass White Girl.” Their name is a reclaiming of the federal charge legislated under the Patriot Act that condemns those providing material support for terrorism and has been criticized by civil rights advocates for criminalizing and targeting activists. The band released their four-song debut EP Balikbayan Box in July 2016 on Filipino-American label Aklasan Records and released the first tracks “Solidarity/KYR” of their debut album this past summer. Check out their interview in Maximum Rocknroll here.