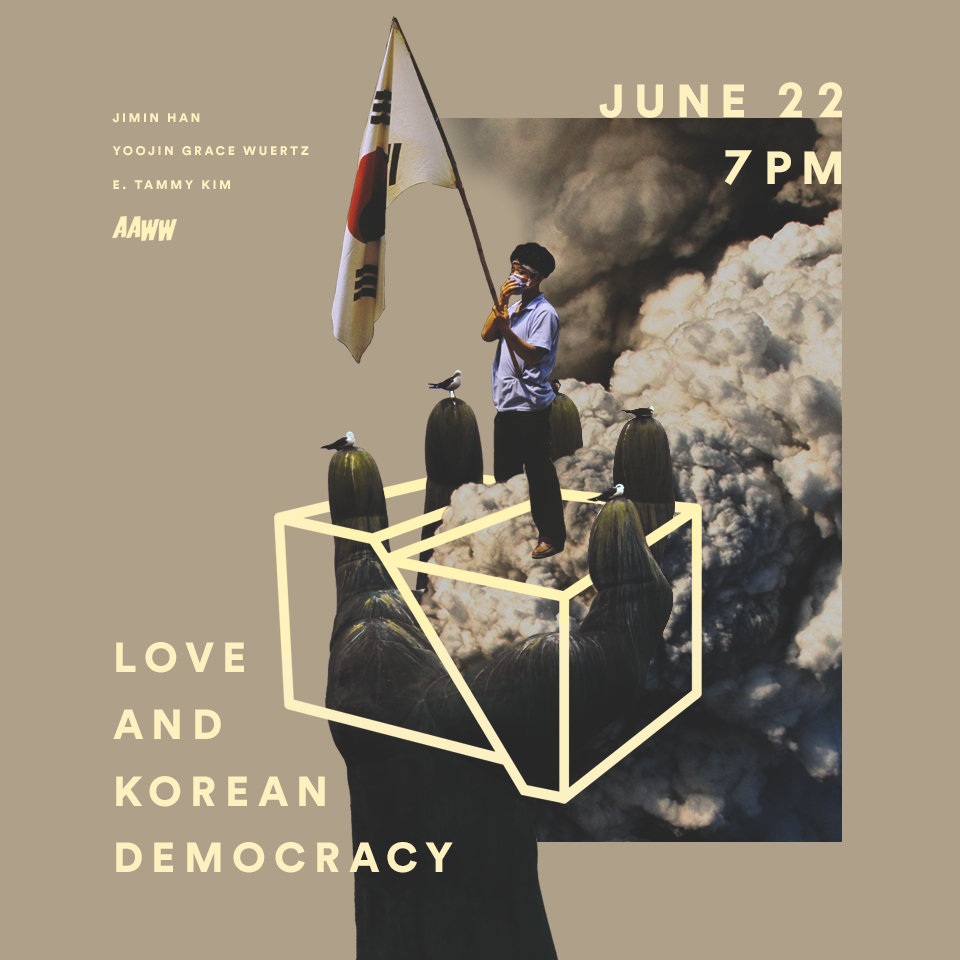 Join us for two Korean American novelists whose new novels interrogate 1970s and 1980s Korean politics: Jimin Han and Yoojin Grace Wuertz, both born in Seoul. Both books follow university students, whether in the US and in Seoul, as they fall in love, build friendships, and understand how they relate to the turbulent changes in South Korean society. President Park Chung-hee’s 1970s authoritarian industrialization lays in the background of Wuertz’s novel, while Han’s flashes back to the student protests that helped inculcate Korean democracy. Moderated by former AAWW Open City Fellow E. Tammy Kim of The New Yorker editorial staff.

The title of Yoojin Grace Wuertz’s Everything Belongs to US (Random House 2017) has a note of irony. Its assuming tone of optimism suggests the aspirations of the book’s three main characters, all students at Seoul National University. But such entitlement seems rebutted when a police officer in the book jails a protester and says, “Not everything is your plaything… Not everything belongs to you.” Calling the book a “Gatbsy”-esque takedown of 1970s South Korea, Christine Hyung-Oak Lee writes in The New York Times, “The year is 1978, and that protester is named Jisun, who, along with Namin and Sunam, is Wuertz’s literary conduit for 1970s Korean history—a time when President Park Chung-hee’s fixation on economic recovery after the Korean War entailed suppressing all forms of political dissent and allowing inhumane working conditions to flourish…. This is the story about Korea I’ve been waiting to read—a story not about the Korean War, but about its aftermath and emerging democracy, and it is a fine telling.”

In Jimin Han’s A Small Revolution (Amazon 2017), a troubled Korean American student takes Yoona Lee and her friends hostage in their Pennsylvania college dormitory. He demands that North Korea release their friend from prison and a meeting with President Ronald Reagan, South Korean President Chun Doo Hwan, and North Korean leader Kim Il Sung. The suspenseful hostage situation forces Yoona to revisit her past, both an abusive household and the truth about her lover Jaesung’s tragic death. A riveting portrait of love, idealism, and paranoia, the book takes as its subtext the 1980s pro-democracy student protests in Korea, such as the infamous Gwangju massacre, where the government fired upon hundreds of protesters. As Leland Cheuk writes in Electric Lit, “In Jimin Han’s debut A Small Revolution, the personal is political in every scene of this fraught and swift tale that is at once a hostage crisis, a campus love triangle, and a protest novel.” Jimin Han teaches at The Writing Institute at Sarah Lawrence College and lives outside New York City with her husband and children.

E. Tammy Kim is a freelance writer, a member of The New Yorker’s editorial staff, and a former lawyer and adjunct professor. She was an AAWW Open City Fellow from 2012 to 2013. You can check out one of her pieces, “Classic Coffee Shop, Thirty-Six Years on Hester Street” on Open City here.

This event is cosponsored by the Center for Fiction, Center for Korean Research, NYU Creative Writing Program, The Asian/Pacific/American Institute at NYU, and Nodutol.