2011 is starting off with a bang! We’re ushering in the new year with a Mouth to Mouth Open Mic featuring activist and spoken word artist Kelly Zen-Yie Tsai and poet Ocean Vuong. So, come, bring a friend, and be ready to get your socks rocked off by poetry.

Ocean Vuong born in 1988 in Saigon, Vietnam, is the author of Burnings (Sibling Rivalry Press 2010) and is currently an undergraduate English Major at Brooklyn College, CUNY. His poems have received an Academy of American Poets Prize, the Beatrice Dubin Rose Award, the Connecticut Poetry Society’s Al Savard Award, as well as four Pushcart Prize nominations. His work appear in Word Riot, the Kartika Review, Lantern Review, SOFTBLOW, Asia Literary Review, and PANK among others. Poems have also been translated into Hindi, Russian, Korean, and Vietnamese. He lives in Brooklyn and is an avid supporter of animal rights and Veganism. 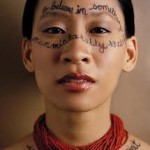 Kelly Zen-Yie Tsai has been featured in over 450 performances worldwide at venues including the Nuyorican Poets Cafe, the House of Blues, the Apollo Theater, Kennedy Center, Lincoln Center, and three seasons of the award-winning “Russell Simmons Presents HBO Def Poetry.” The author of Inside Outside Outside Inside (2004), Thought Crimes (2005), No Sugar Please (2008), and The CD’s Infinity Breaks(2007) and Further She Wrote (2010), Tsai has shared stages with Mos Def, KRS-One, Sonia Sanchez, Talib Kweli, Erykah Badu, Amiri Baraka, Harry Belafonte, and many more.