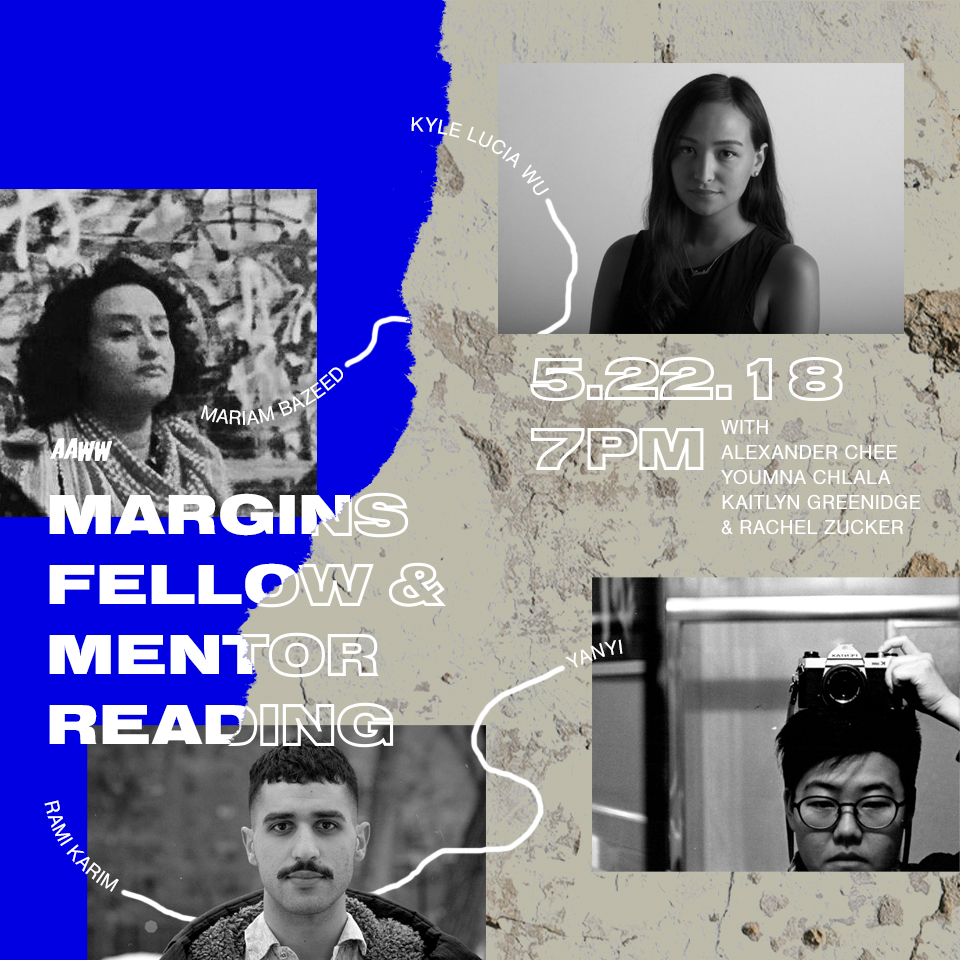 For more than twenty years, the Asian American Writers’ Workshop has incubated emerging writers of color, including such writers as Tina Chang, Monica Ferrell, and Jhumpa Lahiri. We recently created an utterly new fellowship that grants publication opportunities, cash, work space, and a residency at the Millay Colony for the Arts: The Margins Fellowship. Join us as we celebrate the literary accomplishments of our second class of Margins fellows—Mariam Bazeed, Rami Karim, Kyle Lucia Wu, and Yanyi—and hear them read with mentors award-winning novelist Alexander Chee, internationally exhibited artist and writer Youmna Chlala, novelist and LENNY Letter contributor Kaitlyn Greenidge, and poet and educator Rachel Zucker.

Born to Egyptian parents in Kuwait, Mariam Bazeed began her life a statistic of economic expatriation in the Persian Gulf. A writer of prose, poetry, and thinly-disguised memoir, Mariam is currently pursuing an MFA in Fiction at Hunter College, where she is at work on her first novel-ish. Mariam makes her living, as it were, as an editor and a commercial and literary translator. In addition she is a performance artist, singer of old Arabic songs, curator, and cook. She has been the recipient of the Hedgebrook Women’s Writing Residency, the Marble House Writing Residency, the Helix Performance Network’s NEEDING IT fellowship at the Brooklyn Arts Exchange, and has been a featured poet at the Bowery Poetry Club. Mariam’s first play, PEACE CAMP ORG, debuted in a workshop performance at La Mama Theater in New York City. She was recently accepted into the 2017 class of the Hemispheric Institute’s EmergeNYC fellowship for performance and politics. In her writing Mariam is concerned with themes of migration, death, death, also death, sickness, death, and the estrangements particular to love and family. Mariam is currently at work on a novel informed by her biography as a life-long expat. She is also at work on a collection of short stories set in Egypt during and immediately following the Arab Spring.

Rami Karim is a writer and editor based in Brooklyn. Their work engages dreams, dissociation, and migration and has appeared or is forthcoming in Apogee, The Brooklyn Review, The Invisible Bear, Tagvverk and Peregrine. They are a member of Kaf, an art/publishing collective, and an MFA candidate in creative writing at Brooklyn College, where they received the Himan Brown, Carole Lainoff and Rose Goldstein awards in poetry. They teach writing at the City University of New York and are the author of chapbook Smile & Nod (Wendy’s Subway, 2017) and three poems published in The Margins.

Kyle Lucia Wu is a Chinese-American writer living in Brooklyn. She is the co-publisher of the literary journal Joyland and the social media editor at Electric Literature. She has an MFA in fiction from The New School and a BA in psychology from New York University. She has studied at the eight-week fiction workshop at the Iowa Writers’ Workshop, was a Byrdcliffe Colony Artist-in-Residence in May 2015, and is a PEN prison writing mentor. Kyle is interested in hybrid forms of identity, and the invisibility and confusion that accompanies it. She explores how to occupy an identity that hasn’t been defined, and how society seeks to categorize individuals who don’t fall cleanly into pre-established roles. The ways in which we constitute our identities across race, gender, and class are themes that drive her work. She is working on a novel about a mixed-race young woman who works for a wealthy white family, and how it refracts her own fractured background growing up between two families, between two races, and always as an outsider.

Yanyi is a poet and critic. In 2018, he won the Yale Series of Younger Poets Prize in Poetry, awarded by Carl Phillips, for his first book, The Year of Blue Water (Yale University Press 2019). He formerly served as Director of Technology and Design at The Brooklyn Institute for Social Research, senior editor at Nat. Brut, and curatorial assistant at The Poetry Project. The recipient of a 2015 Emerging Poets Fellowship from Poets House, Yanyi’s poems and criticism have recently appeared in The Margins, Memorious, and Model View Culture. He is currently associate editor at Foundry.

Youmna Chlala is an artist and a writer whose work investigates the relationship between fate and architecture through drawing, video, sculpture, prose and performance. She participated in the 2011 Performa Biennial and has exhibited widely including the ICA London, Rotterdam International Film Festival, The Drawing Center, Dubai Art Projects, Henie Onstad Kunstsenter, Camera Austria, CultuurCentrum Bruges and Art In General. Her book of poetry The Paper Camera is forthcoming by Litmus Press. She is the Founding Editor of Eleven Eleven {1111} Journal of Literature and Art and recipient of a Joseph Henry Jackson Award. Her writing appears in Urban Hopes- Made in China and in publications such as Guernica, Bespoke, CURA, Prairie Shooner, MIT Journal for Middle Eastern Studies and XCP: Journal of Cross Cultural Poetics. In 2010, she co-founded the Institute of Mutating Cities. Chlala is the recipient of several residencies including the Lower Manhattan Cultural Council, Headlands Center for the Arts, Hedgebrook and CAMAC: Center for Art and Technology. She is an Associate Professor in the Humanities & Media Studies Department at the Pratt Institute, on the core faculty of the MFA in Writing program, a founding member of Poetics Lab and co-coordinator of the Architecture Writing program.

Kaitlyn Greenidge’s debut novel is We Love You, Charlie Freeman (Algonquin Books, 2016), one of the New York Times Critics’ Top 10 Books of 2016. Her writing has appeared in the New York Times, the Wall Street Journal, Elle.com, Buzzfeed, Transition Magazine, Virginia Quarterly Review, The Believer, American Short Fiction and other places. She is the recipient of fellowships from the Whiting Foundation, the National Endowment for the Arts and other places. She is a contributing editor for LENNY Letter. She lives in Brooklyn, NY.

Rachel Zucker is the author of nine books, most recently, a memoir, MOTHERs (Counterpath Press, 2013), and a double collection of prose and poetry, The Pedestrians (Wave Books, 2014). Her book Museum of Accidents (Wave Books, 2009) was a finalist for the National Book Critics Circle Award. She received a National Endowment for the Arts Fellowship in 2013. Zucker teaches poetry at New York University and is currently delivering a series of lectures on the intersection of poetry, confession, ethics and disobedience as part of the Bagley Wright Lecture Series.