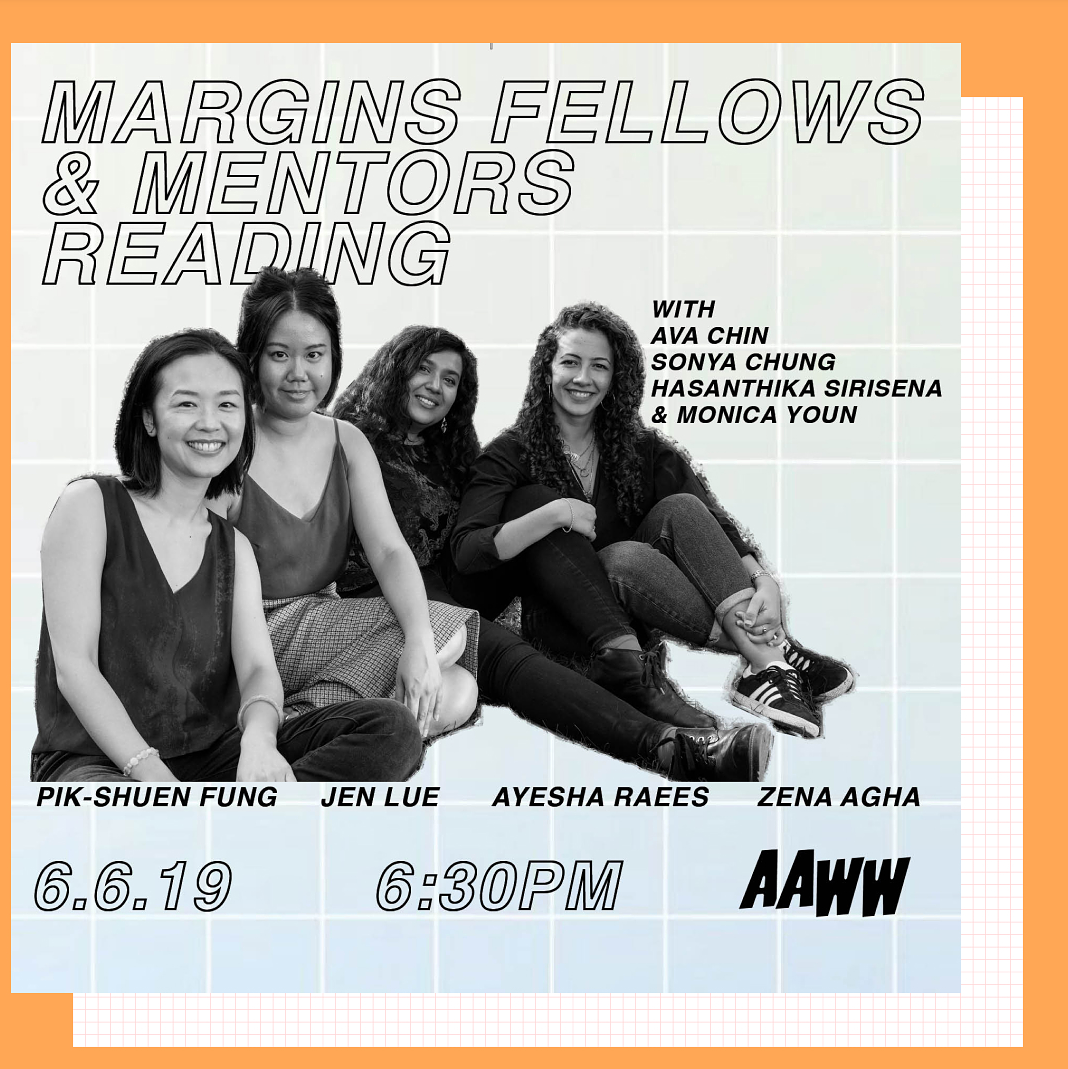 The Asian American Writers’ Workshop’s Margins fellowship was first established in 2014, as a part of AAWW’s 25 year tradition of incubating emerging writers of color. Every year since, we have awarded four writers a year-long fellowship that provides them with financial support, publication opportunities, work space, mentorship, and a residency at the Millay Colony for the Arts.

Zena Agha is an Iraqi-Palestinian writer and poet from in London, currently based in New York. Her work examines immigration, war and life in the diaspora. Zena’s poems have been translated and published internationally and she has performed at universities and festivals around the US, UK and France. She founded Warwick University’s largest poetry collective, Shoot from the Lip, and is currently a Margins Fellow at the Asian American Writers’ Workshop working on a collection of inter-related short stories abour Iraq. Her writing has been featured on NPR, PRI’s The World, WGBH, El País, Skin Deep and Muftah. She was awarded the Kennedy Scholarship to study at Harvard University, completing her Master’s degree in Middle Eastern Studies, followed by a fellowship at Harvard Law School’s Library Innovation Lab. Zena is the US Policy Fellow for Al-Shabaka; The Palestinian Policy Network. Her writing has appeared in Foreign Affairs, The Independent, and The Nation, and media credits include the BBC World Service and BBC Arabic.

Pik-Shuen Fung is a writer and artist from Hong Kong and Vancouver. Her writing has appeared in The Margins and Ricepaper Magazine, and was shortlisted for the 2017 Metatron Prize. Her artwork has been exhibited at the Newark Museum, the Katonah Museum, The Frank Institute at CR10, The Secret Theatre, and Beverly’s. She has an MFA in Fine Art from the School of Visual Arts and a BA in Visual Art from Brown University. As a writer, she is drawn to experimental forms, and her prose traverses family history, maternal lineage, and the experience of love and loss in the Chinese diaspora.

Jen Lue is a writer and graduate of the MFA program in memoir at Hunter College. She is the recipient of fellowships and residencies from Kundiman, VONA/Voices, Jerome Foundation, Tin House and Vermont Studio Center, among others. Based in Brooklyn, she is a 2018-19 Margins Fellow at Asian American Writers’ Workshop and serves on the junior board of Kundiman. She works at The Moth, a national storytelling nonprofit and public radio program.

From Lahore, Pakistan, Ayesha Raees identifies herself as a hybrid creating hybrid poetry through hybrid forms. Her work strongly revolves around issues of identity, class, and race while possessing a strong agency for accessibility, education, and change. Raees’s poetry cultivate relationships between the word and the image through theatrical performance, filmic visual imagery, and documentary photography. She was the 2018-2019 Margins Fellow at Asian American Writers’ Workshop, a recent resident at the Millay Colony For the Arts, and has had work previously published in The Margins, Cherry Tree, and elsewhere. A graduate from Bennington College, she currently lives in New York City.

Ava Chin is the author of the award-winning Eating Wildly: Foraging for Life, Love, and the Perfect Meal (Simon & Schuster, 2014) and the former Urban Forager columnist for the New York Times (2009-2013). She has written for the Los Angeles Times Sunday Magazine, Saveur, Marie Claire, the Village Voice, and SPIN. She is the recipient of grants & fellowships from the New York Public Library’s Cullman Center for Scholars & Writers, the Fulbright U.S. Scholar program, the New York Foundation for the Arts (NYFA), the Asian American Writers’ Workshop, and New York Institute for Humanities at New York University. She holds a Ph.D. from the University of Southern California, and an M.A. from the Writing Seminars at Johns Hopkins University. She is an associate professor of creative nonfiction and journalism at CUNY.

Sonya Chung is the author of the novels The Loved Ones (Relegation Books, 2016) and Long for This World (Scribner, 2010). She is a staff writer for the The Millions and founding editor of Bloom, and is a recipient of a Pushcart Prize nomination, the Charles Johnson Fiction Award, the Bronx Council on the Arts Writers’ Residency, a MacDowell Colony Fellowship, and a Key West Literary Seminars residency. Sonya’s stories, reviews, & essays have appeared in The Threepenny Review, Tin House, The Huffington Post, Buzzfeed, The Late American Novel: Writers on the Future of Books, Short: An International Anthology, and This is The Place: Women Writing About Home, among others. Sonya has taught fiction writing at Columbia University, NYU, Gotham Writers’ Workshop, College of Mount St. Vincent, and Warren Wilson’s MFA program. Currently she lives in New York City and is Writer-in-Residence at Skidmore College.

Hasanthika Sirisena’s essays and stories have appeared in The Globe and Mail, WSQ, Narrative, The Kenyon Review, Glimmer Train, Epoch, StoryQuarterly, Narrative, and other magazines. Her work has been anthologized in Best New American Voices, and named a distinguished story by Best American Short Stories in 2011 and 2012. She is a recipient of fellowships from the MacDowell Colony and Yaddo. In 2008 she received a Rona Jaffe Writers’ Award. She is currently an associate fiction editor at West Branch magazine and a Visiting Assistant Professor at Susquehanna University. She is the winner of the 2015 Juniper Prize for Fiction. Her short story collection, The Other One, was published in 2016.

Monica Youn is the author of Blackacre (Graywolf Press 2016), which won the William Carlos Williams Award, was a finalist for the National Book Critic Circle Award and the PEN Open Book Award, and was longlisted for the National Book Award. Her previous poetry collections are Ignatz (Four Way Books 2010), which was a finalist for the National Book Award, and Barter (Graywolf Press 2003). She has been awarded the Wallace Stegner Fellowship at Stanford University and the Witter Bynner Fellowship of the Library of Congress, as well as residencies at Civitella Ranieri, the Rockefeller Foundation – Bellagio, Yaddo and MacDowell. A former lawyer and the daughter of Korean immigrants, she currently teaches at Princeton University and in the Columbia University and Sarah Lawrence MFA programs.