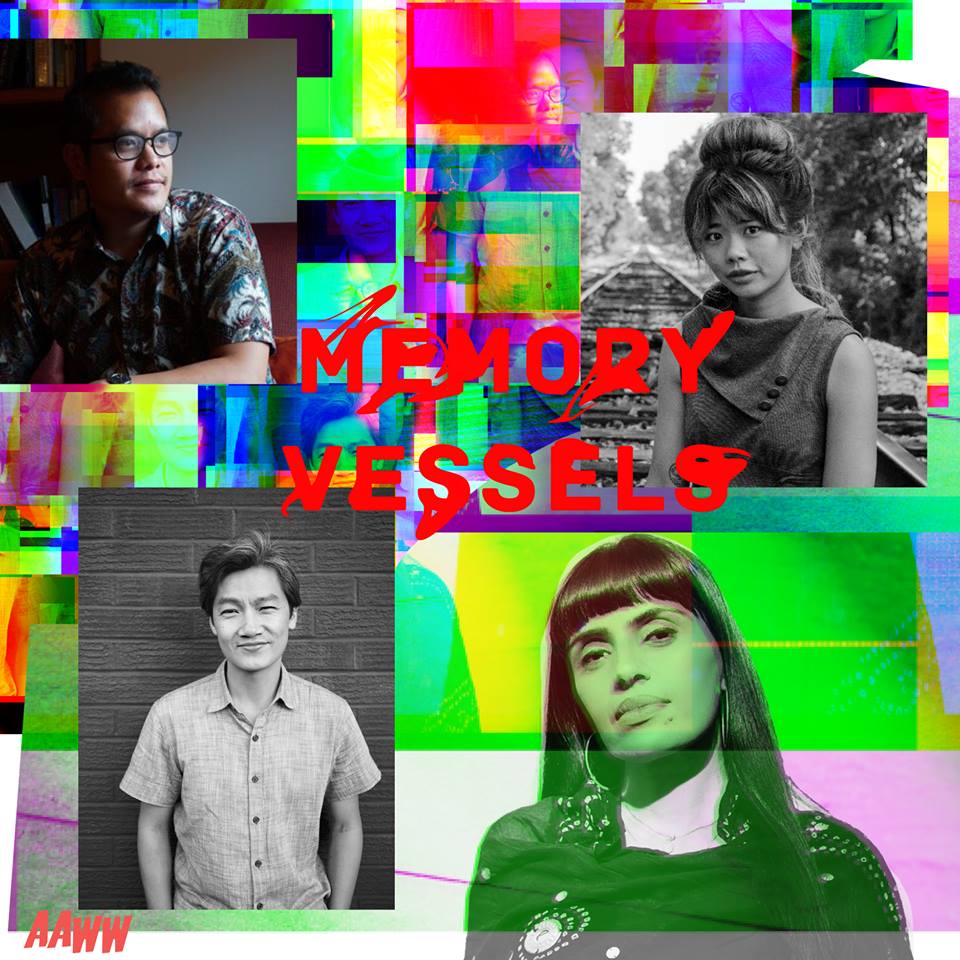 Have you ever held a beloved object–say, an old photograph or a faded letter–and found yourself transported back into a space of memory? Join us for a reading featuring four poets exploring the the vessels that carry us across the waters of memory. We’ll celebrate the two winners of Singapore Unbound’s Gaudy Boy Poetry Prize: Jenifer Sang Eun Park, whose Autobiography of Horse will change the way you think about horses, and Lawrence Lacambra Ypil, whose The Experiment of the Tropics, which explores the American occupation of the Philippines through text and image (Check out a piece of it in The Margins!). They’ll be joined by Hai Dang-Phan, whose Reenactments incorporates translation into the tender work of retracing his family’s forced migration from Vietnam, and Muslim American poet Sham-e-Ali Nayeem, whose City of Pearls stirs in the landscapes of loss while sifting through memories of her father and mother. Introduced by AAWW Asia Editor Kaitlin Rees, editor of the Transpacific Literary Project.

Jenifer Sang Eun Park’s Autobiography of Horse: A Poem is a frenetic tour of a splayed self writing through an equine obsession and combines lyrical prose, diagrams, photos, and conceptual excerpts from imagined texts. As Wong May, who selected the book for the Gaudy Boy Poetry Prize, writes: “The horse inhabits the poet . . . the way Kafka’s Gregor Samsa found himself morphed into a beetle. It is of course the diary of a young poet—the making of a particular one with a unique sense and sensibility.… This is an original [that] won my heart.”

Sham-e-Ali Nayeem’s poetry collection City of Pearls (UpSet Press 2019) charts the landscape of memory across continents and between mothers and daughters. As Kazim Ali writes, “I was brought back to the landscapes of my childhood by these sensitive poems. So quietly but firmly do they evoke not only the shattered rocks of Hyderabad but also the ways in which some of us live perpetually between, belong neither to one place nor the other, always in transit, always hoping for news from ‘home.'” A former public interest lawyer supporting economic justice for survivors of family and intimate partner violence, she is the recipient of the Loft Literary Center Spoken Word Immersion Fellowship. Her poetry has appeared in anthologies like Shattering the Stereotypes: Muslim Women Speak Out (Olive Branch Press, 2005) and Living Islam Out Loud: American Muslim Women Speak (Beacon Press, 2005).

Hai-Dang Phan’s Reenactments (Sarabande 2019), a brutal and precise debut poetry collection, deploys poetry and translation to remember his family’s exodus from Vietnam–and shows that the past is never far from the present. As Rick Barot writes: “In poems that are as intense as they are lucid, Hai-Dang Phan illustrates James Baldwin’s assertion that history is not the past, it is the present. The military hardware transported on the interstate, the vexing public memorials for past and recent wars, the refugees on the TV news, and the punk band named after the Viet Cong—Phan shows the present charged by the toxic continuing of the past.” Phan’s poetry appears in the New Yorker, Poetry, New England Review, jubilat, Lana Turner, Prelude, and in the chapbook Small Wars (Convulsive Editions, 2016). The recipient of awards from the NEA, Bread Loaf, Poetry, and ALTA, he teaches at Grinnell College and lives in Iowa City, Iowa.

Lawrence Lacambra Ypil’s The Experiment of the Tropics: Poems (Gaudy Boy 2019) returns to early-twentieth-century Philippines during American occupation and asks, “How does one look at the past?” Often writing in response to photographs of the city, Ypil’s lyrics, at once anthropological and erotic, excavate the still present legacies of colonialism. As Resil Mojares, National Artist of the Philippines for Literature, writes: “These poems are (as John Berger says of photographs) ‘quotations from appearances, ‘ fragmentary, discontinuous, ambiguous. With their surprising, capricious conceits, these ruminations on place, time, image, and memory bespeak a distinct intelligence and sensibility. Ypil is one of the finest poets from the Philippines today.” Ypil’s first book of poems, The Highest Hiding Place was given the Madrigal Gonzalez Best First Book Award. His work has received The Academy of American Poets Prize, the Philippines Free Press Awards, and the Don Carlos Palanca Memorial Awards among others.