When Outsourced premiered last fall filled with tired, overplayed jokes that relied on bad desi accents and references to sacred cows, it seemed that American popular cultural representations of India had officially shifted from the “land of the ashram” to “the land of the call center.” Whether you laughed or cringed when watching Outsourced (or didn’t tune-in at all!), we hope you’ll join us for reflections in fiction and film about this “new India.”

Acclaimed writer and “Grand Dame” of Indian literature Bharati Mukherjee reads from her new novel Miss New India, which follows 19-year-old Anjali Bose from her home in a lower middle-class town to the high-tech city of Bangalore. In a starred review, Booklist writes, “Who better to capture the seismic shifts under way in India as the digital revolution takes hold than laser-precise and sharply witty Mukherjee?” And award-winning independent filmmaker Prithi Gowda screens her captivating experimental short film Televisnu, about a young woman who finds work in a call center to ask the question, “What are the possibilities that arise when a moment of personal development converges with a moment of cultural liberation?” 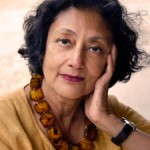 Bharati Mukherjee is the author of seven novels, two story collections, and the coauthor of two books of nonfiction, including The Middleman and Other Stories, The Tree Bride, and Desirable Daughters. She has also written numerous essays on immigration and American culture and is the first naturalized U.S. citizen to have won the National Book Critics’ Circle Award for Best Fiction. She is a professor of English at the University of California, Berkeley.

Prithi Gowda grew up in the suburbs of Detroit and spent summers in Bangalore, India. At 17, she moved to New York City to study drawing, returned to Detroit to work as a motion graphic designer for a news station, and then studied film at NYU. Her short thesis film Televisnu premiered at SXSW 2010 and was a Wasserman finalist at NYU’s First Run Film Festival in 2011. The film also received a grant from the National Board of Review. Prithi lives in New York City and freelances as a graphic designer and filmmaker. She has produced online spots for Nike and women’s wear designer Doo.Ri. She is currently developing a feature called White Flight.