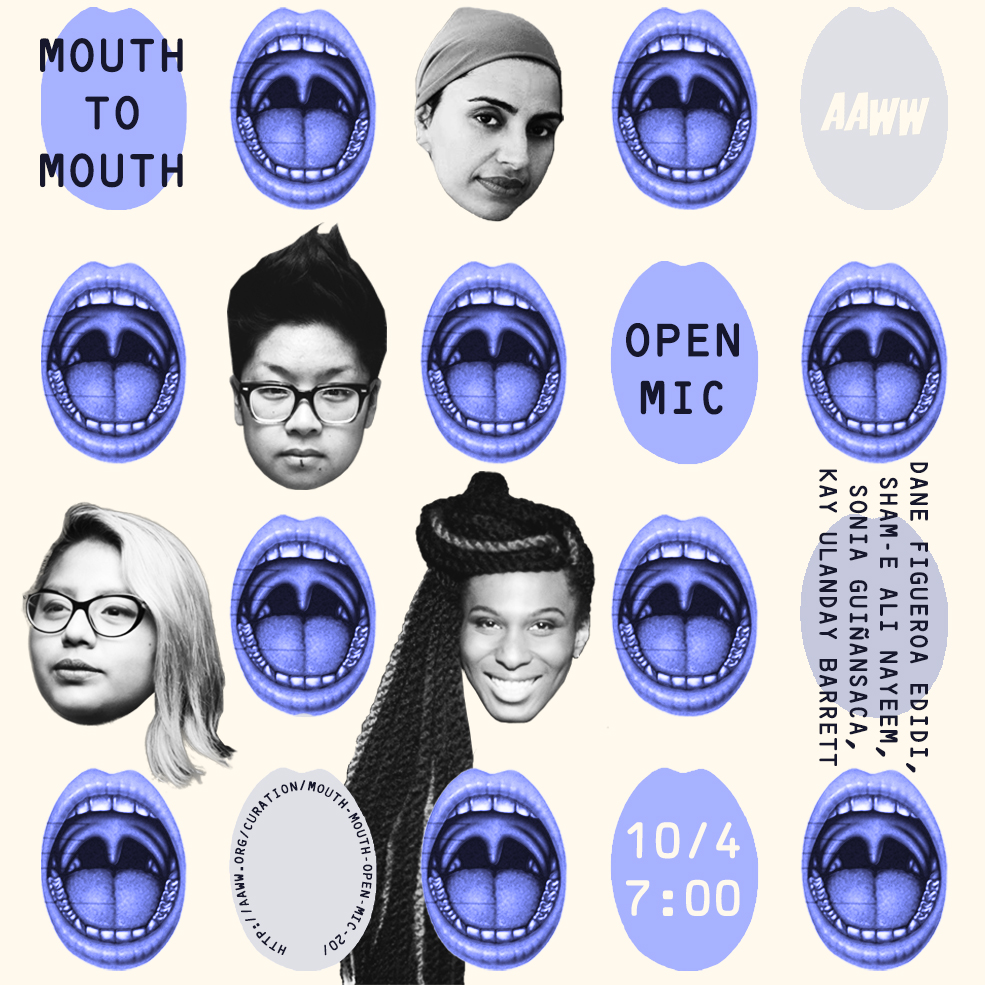 Mic Check! Are you a writer? Come share your work at our next edition of our open mic, Mouth to Mouth. Hosted by poets Sonia Guiñansaca and Kay Ulanday Barrett, this edition of Mouth to Mouth features Dane Figueroa Edidi and Sham-e Ali Nayeem. Mouth to Mouth seeks to provide a safe community space for QTPOC and rising migrant artists.

Sham-e-Ali Nayeem is a Philadelphia area-based poet and visual artist who was born in Hyderabad, India and raised in both the UK and the US. Recipient of the 2016 Loft Literary Center Spoken Word Immersion Fellowship, her poetry has appeared in publications, such as SALT Journal, SAMAR, Roots & Culture Magazine, and Mizna, and can be found in anthologies, including Shattering the Stereotypes: Muslim Women Speak Out (Olive Branch Press, 2005), Living Islam Out Loud: American Muslim Women Speak (Beacon Press, 2005) and Shout Out: Women of Color Respond to Violence (Seal Press, 2008). Sham-e-Ali has performed her poetry both locally & internationally, including at the Oxford Literary Festival. She is currently working on her forthcoming book of poetry The City of Pearls (UpSet Press 2017).

Dane Figueroa Eddi is an African, Cuban, Indigenous trans choreographer, cabaret performer, author, and advocate. The director of global initiatives for Trans Women of Color Collective, she is a 2016 Helen Hayes Award Nominee for her choreography in Dontrell Who Kissed the Sea. She has performed at Round House Theater, the Kennedy Center, Theater for the New City, Arena Stage, and La Mama. Honored with the Pioneer Award for her work in the DC Trans community, she was the first trans woman of color in Washington DC to publish a novel, Yemaya’s Daughters, whose protagonist was a trans woman, as well as the first trans playwright in Theater Alliance’s Hot House New Play Reading Series.

This event is open to the public. Swing by 6:30pm and sign up! Program starts at 7pm.