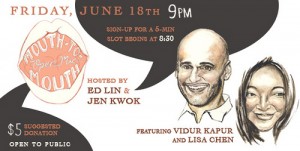 Got a summer fling you want to tell the world about? Come by for our fifth Mouth to Mouth Open Mic of the year, featuring stand up comedian Vidur Kapur and poet Lisa Chen. Lisa’s book of poetry, Mouth, uses everything from poems carved in the loneliness of Angel Island barracks to reality shows and was called “playful, gorgeous, weird, often hip” by Linh Dinh. Last year, stand up comedian Vidur Kapur was one of the top three booked acts on US college campuses, where he and moved South Asian and LGBT students on the margins to the campus core. Come have a cold one on us.

Vidur Kapur was born in Calcutta, India and grew up in Delhi. He went to university in England and worked in the corporate world for a while before becoming a comedian. Mr. Kapur was nominated in ’08 for a “NewNowNext” Award by MTV Network’s Logo as “Brink of Fame: Comic.” Vidur was selected as a New York finalist by NBC’s “Stand Up for Diversity” initiative and performed as part of the famous New York Comedy Festival where he was described as “a comedian to remember.” Vidur starred in a VH1 TV pilot called “Carolines” which will be aired soon. Vidur’s most recent stand-up special “One Night Stand Up” Vol. 2 is currently airing on Logo. He was listed by India Tribune as one of the “Top 31 personalities of Indian Americans”. He is known for discussing being Indian and gay in his comedy. He has co-starred with Margaret Cho in MTV LOGO’s “Outlaugh Festival on Wisecrack” and has toured internationally including Canada, India, the UK, Ireland, the Caribbean and South Africa.

Lisa Chen was born in Taipei Taiwan, lived for a long time in the Bay Area before moving to New York. She is the author of a book of poems, Mouth, published by Kaya Press and works as a consultant on media campaigns for social justice and environmental organizations. Her writing has been published in The New York Times, USA Today, Boston Globe, San Francisco Chronicle, and numerous other publications. She is also the co-author of The She Spot: Why Women are the Market for Changing the World and How to Reach Them.