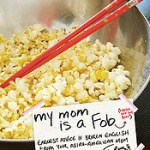 Does your mom leave desperate voicemails asking you to “please pick up phone? hello? are you there?” or take twenty-four more napkins than she needs at Taco Bell? Your mom may be a fob. What began in 2008 as a blog featuring endearing and nosy texts and emails from Teresa Wu and Serena Wu’s mothers has evolved into a collective archive of all our delightfully fobby mothers. We’ll be kicking off the book version of My Mom is a Fob with Teresa and Serena over tasty booze and bao. Ring in Mother’s Day early this year as Jennifer 8. Lee, Ed Lin, Kelly Zen-Yie Tsai, and Eddie Huang share stories of their favorite mother-moments.

Teresa Wu and Serena Wu are the creators ofmymomisafob.com and mydadisafob.com. Both spent their childhood years in Fremont, California, home to a thriving community of fobby moms. Teresa graduated from the University of California, San Diego and her writing has appeared on Glamour.com, Lemondrop.com, CNNGo.com, and more. She currently lives in New York City and blogs atbyteresawu.com. Serena graduated from the University of California, Berkeley and now works as a web designer and game artist in San Francisco. To learn more about Serena, please visit serenastudio.com.

Jennifer 8. Lee was a reporter at The New York Timesfor nine years, where she covered poverty, the environment, crime, politics, and technology. She harbors a deep obsession for Chinese food, the product of which is The Fortune Cookie Chronicles (Twelve, 2008), which explores how Chinese food is all-American. NPR has called her “conceptual scoop artist.”

Ed Lin is the author of Waylaid (2002) and This Is a Bust (2007), both published by Kaya Press. Snakes Can’t Run (2010), the sequel to This Is a Bust, is published by Minotaur Books. Lin, who is of Taiwanese and Chinese descent, holds degrees in mining engineering and journalism from Columbia University. He lives in New York with his wife, actress Cindy Cheung.

Spoken word artist Kelly Zen-Yie Tsai has been featured in over 450 performances worldwide at venues including the Nuyorican Poets Cafe, the House of Blues, the Apollo Theater, Kennedy Center, Lincoln Center, and three seasons of the award-winning “Russell Simmons Presents HBO Def Poetry.” The author of Inside Outside Outside Inside (2004), Thought Crimes (2005), No Sugar Please(2008), and the CD’s Infinity Breaks (2007) and Further She Wrote(2010), Tsai has shared stages with Mos Def, KRS-One, Sonia Sanchez, Talib Kweli, Erykah Badu, Amiri Baraka, Harry Belafonte, and many more.

Open for just over a year, Eddie Huang‘s restaurant, Baohaus, has received critical acclaim and coverage from the New York Times, Time Magazine, The New York Post, New York Magazine, Serious Eats, Time Out New York, and many more. The closest Eddie came to “formal” cooking training was from his mother. Influenced by her style, he developed his own unique recipes and techniques by eating out, taking notes and recreating dishes at home. He believes that everyone has three cooking classes-a-day: Breakfast, Lunch, Dinner. He is a culinary outsider who became an insider by creating his own opportunities. Before Baohaus, Eddie enjoyed various professions including writer, lawyer and stand-up comedian. In his spare time, Eddie enjoys watching the Redskins, Knicks, hitting the roor, and hollering at birds. Photo credit: Phil Chang

My Mom Is A Fob Book Bash