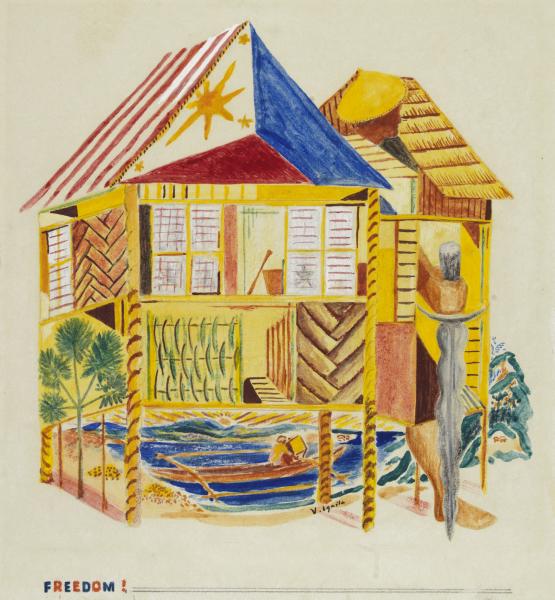 Come for a special event about Filipinx-American history, migration, queerness, and the elusive goal of cracking the American Dream for working-class immigrants. Elaine Castillo’s debut America is Not the Heart is a vibrant and starkly hilarious novel told through the perspective of different members of the De Vera family, who flee Marcos-era Philippines in stages for the immigrant suburbs of the Bay Area, and the title a riff on of Carlos Bulosan’s social classic about the life of a migrant Filipino farm worker. Elaine will be joined by writer, journalist and poet Luis H. Francia, who will read from his introduction to the Philippine’s version of Bulosan’s text, and recent poems about police violence and Duterte. They will be joined by Kundiman co-founder Joseph O. Legaspi, the author of Threshold, a collection of poetry, and moderator Gina Apostol, the author of Gun Dealer’s Daughter.

Elaine Castillo’s first novel is America is Not the Heart (Viking, 2018), which follows Hero de Vera, a young Filipina woman arriving in California to live with her uncle. In her new life among her relatives, she realizes the contrast between the American Dream and the reality of the 21st century, as she falls in love and undergoes a series of trying dramatic turns. Jade Chang writes of America is Not the Heart: “The creative accomplishments of this story are incredible: this unexpected family, this history, this embrace of the sacred and the profane, this easy humor, this deeply felt human-ness, this messy, perfect love story.” Castillo was born, raised, and lives in the Bay Area.

Winner of the Palanca Poetry Prize, Luis H. Francia has had five poetry books published, including Tattered Boat (2014), The Beauty of Ghosts (2010), and Museum of Absences (2005). In 2002, he won both New York’s PEN Open Book and the Asian American Writers literary awards for Eye of the Fish: A Personal Archipelago. In 2016, RE: Reviews, Recollections, Reflections (2015), was awarded Manila’s National Book Award for Best Essays in English. Included in the Library of America’s Becoming Americans: Four Centuries of Immigrant Writing, Francia has edited or co-edited three anthologies, including Flippin’: Filipinos on America. A member of the New York Writers Workshop, he has taught at the City University of Hong Kong, the St. Marks Poetry Project, Ateneo de Manila University, the College of St Benilde, Yale, and the Iowa Writers Summer Workshop. He is on faculty at New York University and at Hunter College. He writes an online column, “The Artist Abroad,” for the Philippine Daily Inquirer. You can read his poem in tribute to Eric Garner in The Margins.

Joseph O. Legaspi’s latest book of poetry is Threshold, a collection which explores fluidity, boundaries, and the sense of being in-between. The language of his poetry creates a full, incredible world inhabited by the reclaimed body of the poet himself. Rigoberto González writes: “These exquisite poems invite us to cross into the ‘periphery / of sanctuary and danger,’ farther into the rooms of family and culture, in order to find nourishment in breath, beauty, desire, and love.” Legaspi was born and in the Philippines, and he and his family immigrated to California when he was 12 years old. He is the co-founder of Kundiman, an organization that serves Asian American writers.

Gina Apostol’s third book, Gun Dealer’s Daughter, won the 2013 PEN/Open Book Award. Protagonist Soledad Simon reflects on her youth as a wealthy student at university in Manila who falls in love with a rebellious communist. She becomes the architect of a controversy that quickly grows beyond her control. Ashanti L. White says “Rich with emotion, reflection, and fervor, the story takes on an added element of revealing the struggles of Filipinos and women. While the narrative is strong, Apostol’s writing style―simple, poetic, and captivating at every point of Soledad’s journey―is the real draw.” Apostol was born in Manila and grew up in the Philippines. She earned her MFA in creative writing at Johns Hopkins University. An excerpt from Gun Dealers’ Daughter was published in The Margins.

This event is co-sponsored by Kundiman and PAL / Pilipinx American Library, a moveable non-lending library that celebrates Filipinx narratives. This event will be livestreamed on the Asian American Writers’ Facebook page.

Is America in the Heart? New Filipinx Literature