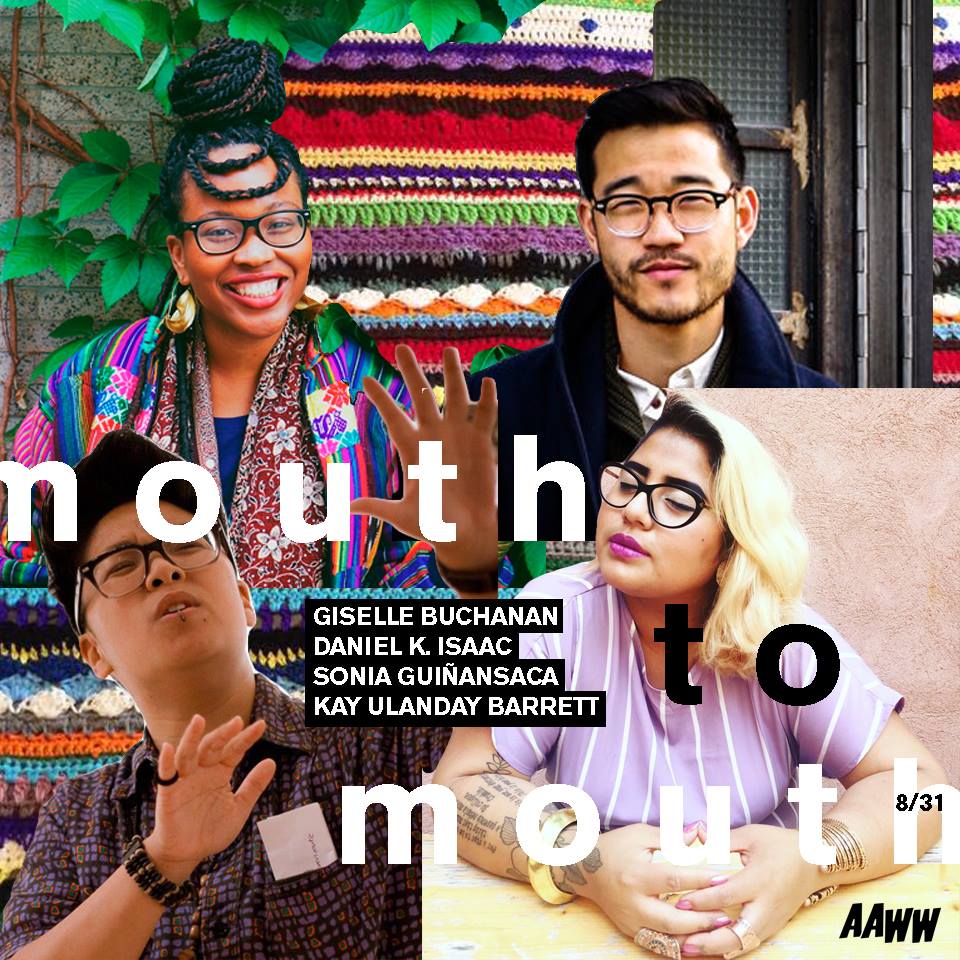 Mic Check! Are you a writer? Come share your work at our next edition of our open mic, Mouth to Mouth. Hosted by AAWW Fam poets Sonia Guiñansaca and Kay Ulanday Barrett, this edition of Mouth to Mouth features Giselle Buchanan and Daniel K. Isaac. Mouth to Mouth seeks to provide a safe community space for QTPOC and rising migrant artists.

Giselle Buchanan is a poet, multidisciplinary artist and writer from the Bronx, NY. Despite the use of many mediums, her work is united under the umbrella of healing. She believes beauty is restorative and that art can act as a therapeutic agent. As an artist deeply involved in her community, she has worked extensively with women, incarcerated men on Rikers Island and children in East Harlem, the Bronx, and Brooklyn. Additionally, she haas worked for various organizations, including the Bronx Museum, Harlem Textile Works and New York Writers Coalition, facilitating workshops and assisting in programs designed to empower the creative and intellectual spirits of students from often underserved communities. She has performed in many places, from bookstores to ballrooms, like Hammerstein Ballroom, the Apollo Theater, the Chicago Theater, Housing Works Bookstore, Bluestockings, and more. She has published writings in Hanging Loose and poems have been featured on media outlets like MSG network and Nickelodeon. She currently resides in Brooklyn, NY. http://gisellebuchanan.com/

Daniel K. Isaac was born and raised in Southern California. He can almost stand on a surf board, and occasionally calls people ‘dude.’ While in fifth grade, his mother heard a story about a preacher who went numb with stage fright and was escorted off the stage. Daniel was promptly signed up for Grace Korean Church’s theatre troupe and he’s been an actor ever since. After receiving his Bachelor’s in Theatre from UC San Diego, Daniel moved to New York City where he’s been seen on large and small screens and stages. http://www.danielkisaac.com/

Kay Ulanday Barrett is a poet, performer, and educator, navigating life as a disabled pilipinx amerikan transgender queer in the U.S. with struggle, resistance, and laughter. When The Chant Comes (Topside Heliotrope 2016) is their first collection. K. has been invited to The White House, Princeton University, UC Berkeley, The Lincoln Center, Queens Museum, and The Chicago Historical Society to name a few. They are a fellow of both The Home School and Drunken Boat. Their contributions are found in PBS News Hour, Lambda Literary, RaceForward, Foglifter, The Deaf Poets Society, Poor Magazine, Fusion.net, Trans Bodies/Trans Selves, Winter Tangerine, Make/Shift, Third Woman Press, The Advocate, and Bitch Magazine. You can read their interview with PBS on poetry as a testimony to survival here.

NOTE ON ACCESSIBILITY
*The space is wheelchair accessible. No stairs. Direct elevator from ground floor to 6th floor.
*We strongly encourage all participants of the space/event to be scent-free.
If you all have any other specific questions about accessibility, please email Sophia Hussain at shussain@aaww.org with any questions on reserving priority seating.