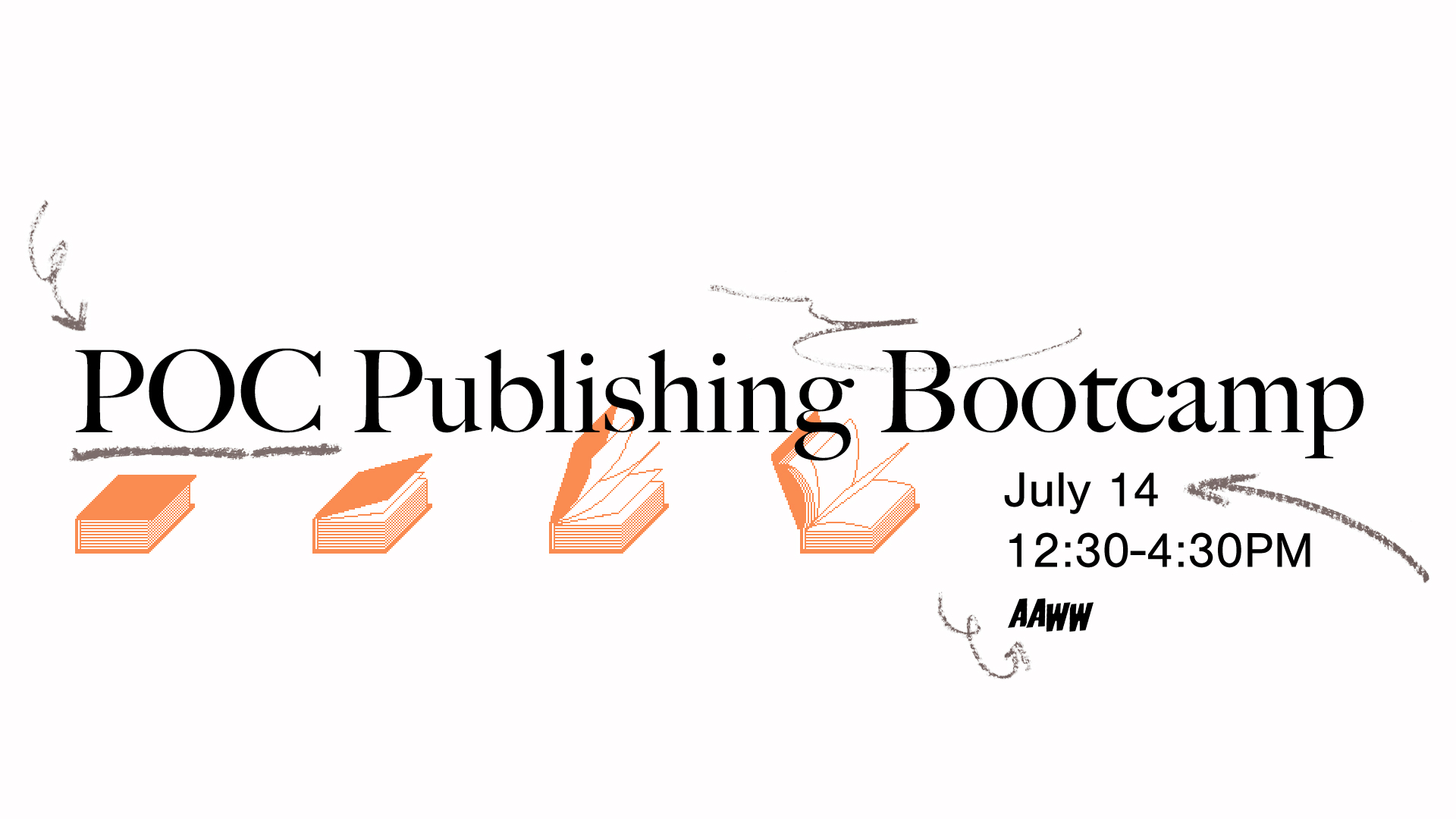 Are you looking for a literary agent, or route to pitch your work to magazines? If you want to hear agents and editors of color tell you how to get your work published—and book one-on-one time with an industry professional to talk about your writing goals, join us for an afternoon intensive designed to bring emerging POC writers in the same room with the agents and editors of color who want to cultivate your career. We’re capping attendance at 50 writers, so apply now!

This summer, AAWW launches our first POC Publishing Bootcamp: an intensive dedicated to guiding emerging writers of color through the publishing process. You’ll hear from a panel of literary agents about how to get an agent: Alia Hanna Habib (Gernet), Serene Hakim (Ayeshe Pande Literary), Rachel Kim (3Arts), Rebecca Nagel (The Wylie Agency), and Quressa Robinson (Nelson Literary). A panel of online editors—including Harper’s Hasan Altaf, Catapult’s Megha Majumdar, The Nation’s Bijan Stephen, Broadly’s Sarah Burke, and The New York Times Magazine’s Jeannie Choi—will talk about how you can get your work published. In between panels, you’ll get to spend a ten minute breakout session to meet with a panelist to discuss your writing career goals.

As a writer of color, you know that finding mentors and a writing community familiar with your world is invaluable, but the publishing world can be notoriously hard to break into. Designed by veteran literary agents, the POC Publishing Bootcamp will demystify the publishing industry for emerging writers of color of all ages and genres, and connect you with industry gatekeepers.

1:00PM-2:10pm
WHAT DO FICTION AGENTS LOOK FOR?
So you’re writing a novel, or you want to. How do you begin finding an agent who will work with you? How do you come to the marketplace from a point of vision and intention, rather than writing just for the market? We’ll hear from Alia Hanna Habib (Gernet), Serene Hakim (Ayeshe Pande Literary), Rachel Kim (3Arts), Rebecca Nagel (The Wylie Agency), and Quressa Robinson (Nelson Literary) about how they arrived at their careers, and what the literary landscape looks like from the agent’s perspective.

2:20-3:20pm
YOUR CONSULTATION
A ten-minute one-on-one consultation with a selected agent or editor. Your agent or editor will have read a Google Form with your name, information, and publication history, so you’ll be ready to jump into important business.

3:30-4:30pm
PITCHING FOR THE WEB
Looking for advice on how to pitch to magazine and online publications? Has Twitter changed the landscape for writers of color to find new audiences and pitch their work? Megha Majumdar (Catapult), Hasan Altaf (Harper’s Magazine), Sarah Burke (Broadly), Jeannie Choi (The New York Times Magazine), and Bijan Stephen (The Verge/The Nation), will guide you through the process and explain what they look for in a pitch.

-A ten-minute one-on-one consultation with an assigned agent or editor from one of the two panels;

-An understanding of what literary agents do and how to find one that will most effectively bring your vision to the marketplace—directly from top agents at 3Arts, Ayesha Pande Literary, Gernet, Nelson Literary, and Wylie;

-Best practices for pitching to online editors at outlets like The New York Times, The Nation, Catapult and Harper’s—and advice on how to maintain relationships with them;

-Exclusive feedback on how agents and editors use Twitter to find writers and story ideas—and how you can use social media to your advantage;

-AAWW membership, which gives you a discount on our writing workshops and books at our literary events

Alia Hanna Habib is an agent at the Gernert Company, where she focuses on narrative nonfiction, investigative journalism and literary fiction and represents a broad range of bestselling and critically acclaimed writers. Her clients include Doree Shafrir (Startup), Pulitzer nominees John Donvan and Caren Zucker (In a Different Key: The Story of Autism), and MacArthur winner Nikole Hannah-Jones. Previous to becoming an agent, she was a longtime publicist at Houghton Mifflin Harcourt. Twitter: @AliaHanna

Serene Hakim is an agent at Ayesha Pande Literary. Born to Lebanese immigrants in the Midwest, she grew up straddling cultures and languages and still feels like a third culture kid. Serene loves to read a variety of genres but is particularly drawn to fiction with strong female voices, both YA and adult fiction and non-fiction with international themes, and LGBTQ and feminist issues. She is always on the lookout for great YA sci-fi and fantasy, realistic YA, and anything that gives voice to those whose voices are underrepresented and/or marginalized. She is especially interested in stories dealing with the Middle East and the variety of immigrant experiences out there. Twitter: @Serenemaria

Rachel Kim is a literary agent at 3Arts Entertainment, where she represents the poet and “Brown Girls” web series writer Fatimah Asghar.

Rebecca Nagel has been a literary agent at The Wylie Agency since 2007.

Quressa Robinson joined the Nelson Literary Agency in 2017 after working at a previous agency and as an editor for five years. She is originally from San Francisco, but has been living in New York City for over a decade. As a New York based agent, she is eager to build her MG, YA, and Adult lists. When not curled on her couch reading, she plays video games, enjoys too much TV–mostly Sailor Moon and Harry Potter (Slytherin!), eats delicious things, drinks champagne, hangs out with her very clever husband, and adds another “dramatic” color to her lipstick collection. Twitter: @qnrisawesome

Sarah Burke is a Brooklyn-based, Filipino-American journalist and curator from O’ahu. Her writing focuses on art, identity, social justice, technology, feminism, and the intersections therein. She is currently an editor at Broadly, VICE’s website for stories about gender and identity. Twitter: @sarahlubyburke

Jeannie Choi has been Associate Editor of all things digital at The New York Times Magazine since 2014. Twitter: @jeanniechoi

Megha Majumdar is Associate Editor at Catapult, where she works on both books and the magazine. She grew up in India, and studied anthropology at Johns Hopkins and Harvard. Twitter: @MeghaMaj

Bijan Stephen writes about internet culture for The Verge and music criticism for The Nation. Previously, he was the web editor at The New Republic. Twitter: @bijanstephen