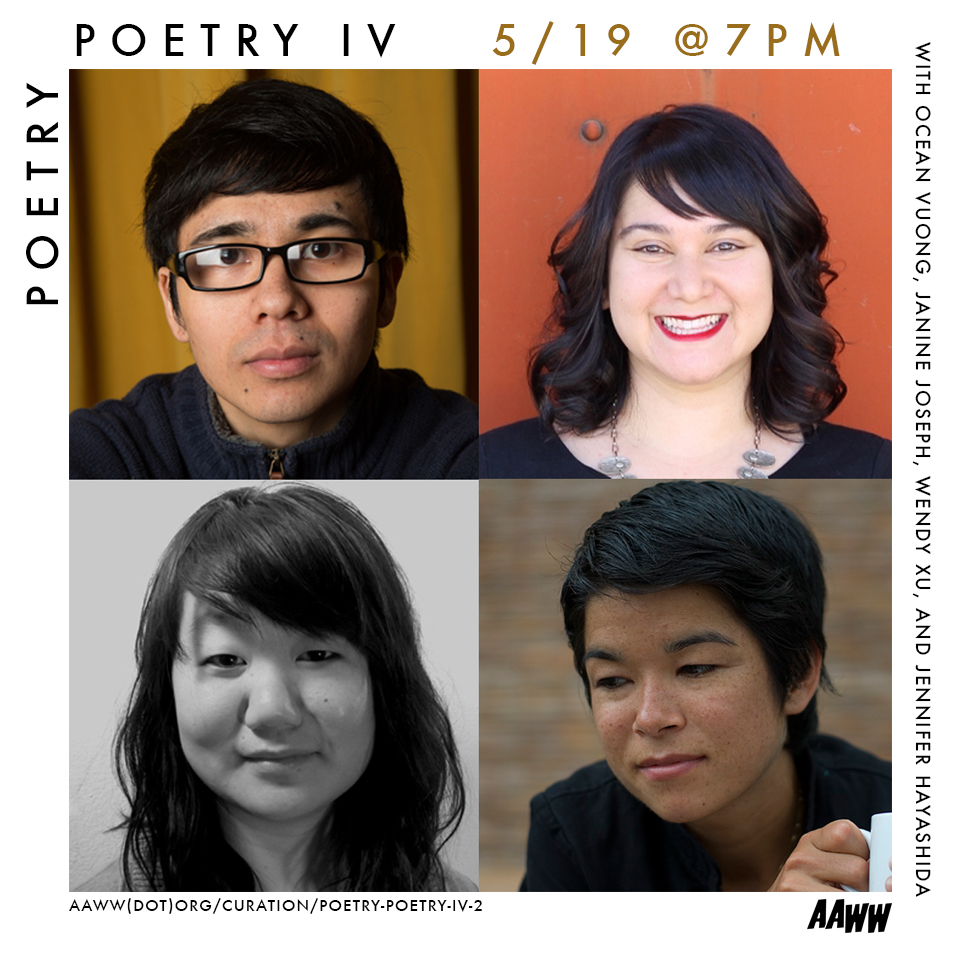 This is POETRY POETRY EPISODE IV, so that means this is some A New Hope sh*t. Come through for three emerging poets who’re wielding the force and making it new: Janine Joseph, Wendy Xu, and Ocean Vuong, who just won the Whiting Award and found himself the subject of a rave profile in The New Yorker.

A former frequenter of AAWW open mics, poet Ocean Vuong is a Saigon-born poet who The New Yorker says means “to fix the English language.” His debut collection is one of the most anticipated new poetry books in years, covered by Slate, Buzzfeed, and elsewhere: Night Sky With Exit Wounds (Copper Canyon Press, 2016). An inheritor to the romantic tradition who writes about the costs of war, Ocean explained to NPR, “My life and my poems try to investigate that intersection of what it means to be an American body born out of violence, making sense out of violence.” As the judges wrote in the citation for the Whiting Award: “Visceral, tender and lyrical, fleet and agile, these poems unflinchingly face the legacies of violence and cultural displacement but they also assume a position of wonder before the world.” Read Ocean in our erotic poetry portfolio in The Margins.

The undocumented experience runs strong in the work of Pinay poet Janine Joseph, whose debut poetry collection Driving Without a License (Alice James Books, 2016) explores the formerly undocumented poet’s coming of age in a place where her mere existence is against the law. An Assistant Professor of English at Weber State University, Janine has written a chronicle of socal pizza joints,Teenage Mutant Ninja Turtles, arm wrestling, freight cards, haunted dunes and the home life of mothers and fathers, teenagers and grandparents, all dealing with immigration enforcement. As Chris Abani writes of her book: “Janine Joseph writes with an open and easy intimacy. The language here is at once disruptive and familiar, political and sensual, and tinged by the melancholy of loss and the discomforting radiance of redemption.” The book won the 2014 Kundiman Poetry Prize and was named a top pick twice (!) by Library Journal and a must-read book for 2016 by Brooklyn Magazine.

Get stabbed in the brain by Wendy’s scalpel-sharp poetry from new chapbook Naturalism (Brooklyn Arts Press, 2016). Of her first book, You Are Not Dead, James Tate wrote ”Wendy Xu breaks all the old rules that have never done us any favors anyway. She writes beautifully, noticing who we are, and letting us see ourselves with a little more humanity, a little more humor, a little more humility. I’m happy to have read this book.” Born in China and educated in Iowa and Massachusetts, Wendy Xu’s poetry resists the “whiter hand of my country,” yanks it by the wrist from the shadows and holds it to light. Check out Wendy’s poetry in The Margins.

Jennifer Hayashida is the Director of the Asian American Studies Program at Hunter College. A poet and translator, she is the recipient of a PEN Translation Fund Grant, a Witter Bynner Poetry Translator Residency, a Jerome Foundation Travel and Study Grant, and has been a MacDowell Colony Fellow. Translated works include Inner China, A Tale (Litmus Press) and A Different Practice (Ugly Duckling Presse).