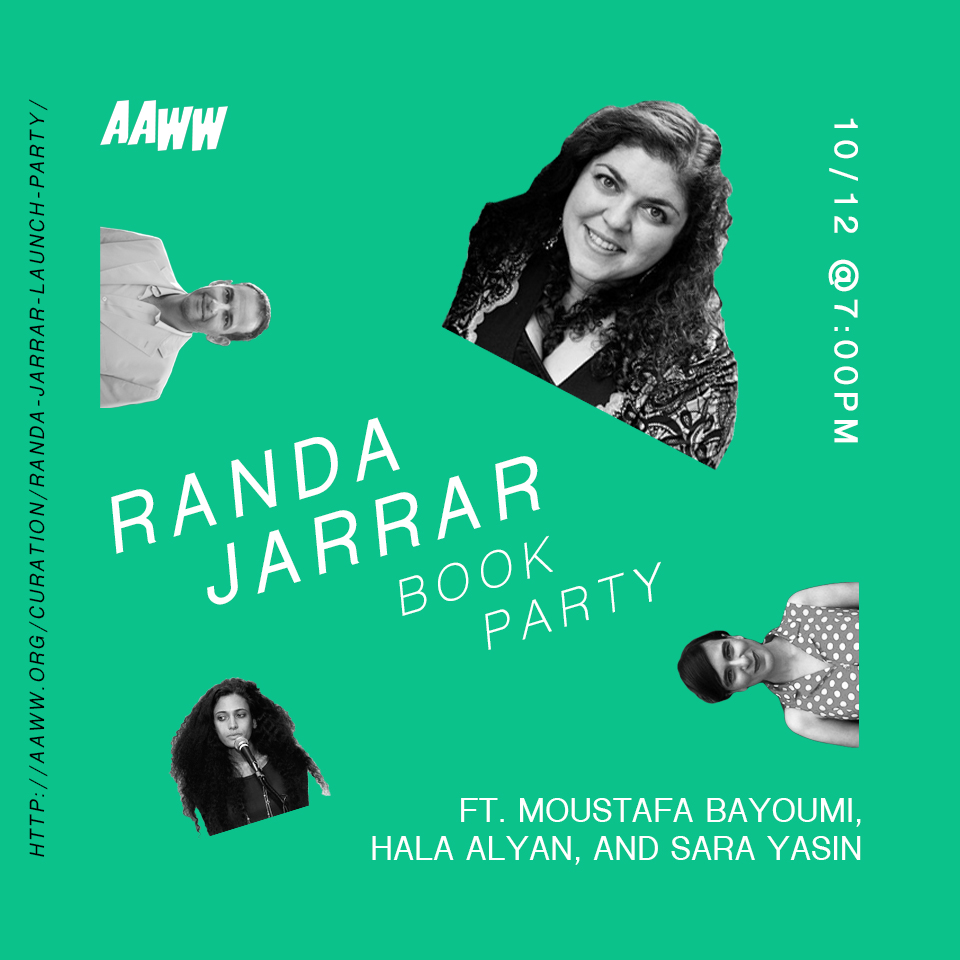 Join us for a subversive, raucous night celebrating novelist Randa Jarrar’s debut short story collection, Him, Me, Muhammad Ali (Sarabande 2016). We’ll hear from Randa herself as well as a cast of literary all-stars performing her work: essayist Moustafa Bayoumi, poet Hala Alyan, and Buzzfeed’s Sara Yasin. BTW, did we mention that we’ll have a photo booth?

Randa Jarrar’s sparkling first novel–A Map of Home (Penguin 2009)–explored the vivacious coming-of-age and budding sex life of a Muslim girl named Nidali, who like Jarrar grew up to a Greek-Egyptian mother and a Palestinian father in Kuwait and moves to the United States in the wake of the first Gulf War. The book won a Hopwood Award, an Arab-American Book Award, and was named one of the best novels of 2008 by the Barnes & Noble Review. Randa’s new book follows the lives of accidental transients, migrants between Cairo, New York, Palestine, Sydney, Jackson, and Istanbul. The cast of characters include a young woman grieving over the death of her father, a distinguished Egyptian feminist, and a little girl kidnapped in a toy store and raised by a tribe of women. As Laila Lalami, author of The Moor’s Account and The Secret Son writes, “Him, Me, Muhammad Ali is a searing collection of short stories about loving, lusting, losing, and surviving. Randa Jarrar is one of the finest writers of her generation. Her voice is assured, fiercely independent, laced with humor and irony—and always, always, honest.” Randa’s work has appeared in The New York Times Magazine, Guernica, and Salon.com, where her essay against white belly-dancers was cited in Lionel Shriver’s infamous polemic against cultural appropriation. In 2010, the Hay Festival and Beirut UNESCO’s world capital of the book named Jarrar one of the most gifted writers of Arab origin under the age of 40. Check out her essay about flying while Arab in AAWW’s The Margins.

Moustafa Bayoumi’s seminal first book, How Does It Feel to Be A Problem?: Being Young and Arab in America (Penguin Press 2008), offered an intimate portrait of Arab youth in Brooklyn, and won an American Book Award and the Arab American Book Award for Non-Fiction. ayoumi’s newest book, This Muslim American Life: Dispatches from the War on Terror (NYU Press 2015). The essay collection chronicles the dangers and absurdities that face many targets of Arabs and Muslims continue to face in the post-9/11 era. The book was chosen as a Best Book of 2015 by The Progressive magazine and was also awarded the Arab American Book Award for Non-Fiction. A Professor of English at Brooklyn College, City University of New York, Moustafa has written for The New York Times Magazine, New York Magazine, and The London Review of Books. Check out videos of him on AAWW’s YouTube page.

Sara Yasin is a foul-mouthed Palestinian-American journalist raised in the south of the United States. When she’s not busy yelling about her various hyphenated identifies on the Internet, she works for BuzzFeed News as a Lead News Curation Editor.