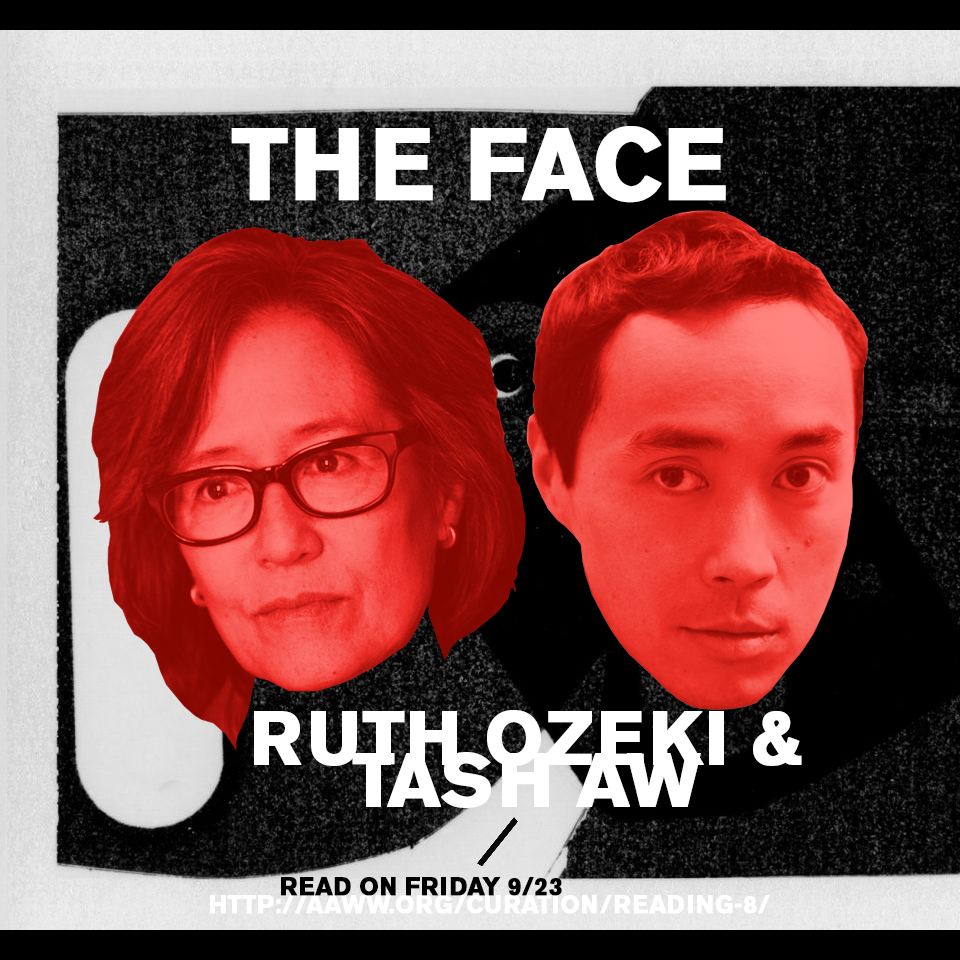 Celebrate the launch of an innovative new series from Restless Books with two of contemporary literature’s most exciting transnational writers: Booker Finalist Ruth Ozeki and Tash Aw. Both writers have slim new editions with a new series by Restless Books called THE FACE, which asks writers to offer a guided tour of that most intimate terrain: their own faces.

Ruth Ozeki’s THE FACE: A Time Code (Restless Books 2016) provides a Buddhist meditation of the second-by-second experience of the author watching her own face. Meanwhile, Tash Aw’s THE FACE: Strangers on a Pier (Restless Books 2016) gives the reader–in the words of Yiyun Li–“whirlwind personal history of modern Asia, as told through his Malaysian and Chinese heritage.” Check out an excerpt of it in The New Yorker here.

Ruth Ozeki’s last novel A Tale for the Time Being (Penguin 2013), a writer (also named Ruth) finds a Japanese teen’s diary that washes up on Vancouver Island in a Hello Kitty lunchbox after the 2011 tsunami. The 14th century Zen master Dogen appears throughout their interlocking narratives, bringing a Buddhist perspective to the journey through time all the characters are ensnared in. The book was shortlisted for the Booker Prize and National Book Critics Circle, and described by the L.A. Times as “an exquisite novel: funny, tragic, hard-edged and ethereal at once.” A novelist, filmmaker and Zen Buddhist priest, Ozeki also wrote the novels My Year of Meats (Penguin 1999) and All Over Creation (Penguin 2004). A contributor to the New York Times op-ed page, she is the Elizabeth Drew Professor of Creative Writing at Smith College.

Born in Taipei and raised in Malaysia, novelist Tash Aw moved to England in his teens and now lives in London. He is the author of three critically acclaimed novels: The Harmony Silk Factory (Riverhead 2005), which won the Whitbread First Novel Award and a regional Commonwealth Writers’ Prize; Map of the Invisible World (Spiegel & Grau 2009) and Five Star Billionaire (Spiegel & Grau 2013), named one of the best novels of the year by NPR. His novels have twice been longlisted for the MAN Booker prize and been translated into 23 languages. His work has won an O. Henry Prize and been published in The New Yorker, A Public Space and the landmark Granta 100, amongst others.

Co-sponsored by The Center for Fiction.