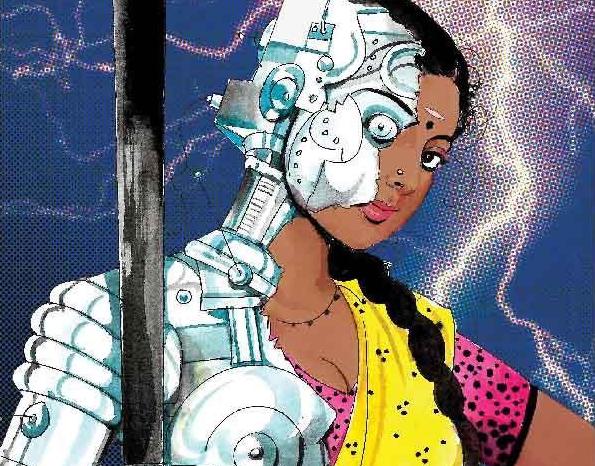 Join us for a reading with four writers who explore the relationship between race and technology. Margaret Rhee reads from LOVE, ROBOT, a collection of love poetry examining the bonds between humans and robots. Poet and community organizer Ching-In Chen reads from recombinant, an assemblage of poetry and data that investigates female and genderqueer lineages, Hugo Award-nominee Mimi Mondal reads from her upcoming novelette and discusses gender expression in South Asian science fiction/fantasy, and Seo-Young Chu reads from her theoretical work on science fiction and how it offers high-intensity realism. Don’t miss this event that uses a variety of forms to explore humans’ relationship with robots, technology, and ourselves. Moderated by Vyshali Manivannan.

Margaret Rhee’s LOVE, ROBOT (The Operating System, 2017) is a set of speculative accounts of robot-human love, drawing from a variety of writing forms, such as algorithms, chat scripts, and sonnets. Viet Thanh Nguyen writes, “In a paradoxical and wonderful way, Margaret Rhee’s robot love affairs make us rethink what it might mean to be human.” Currently, she is completing her first monograph, How We Became Human: Race, Robots, and the Asian American Body, and a full-length collection of essays on radicalization. Rhee is currently a Visiting Scholar at the NYU A/P/A Institute, as well as a Visiting Assistant Professor at SUNY Buffalo in the Department of Media Study, and produces media art in addition to writing. Her poem, “Theft of Color” was published in The Margins.

Ching-In Chen’s recombinant (Kelsey Street Press, 2017) examines erasure, female and genderqueer lineages, and reconstruction of history. “How might a poem diagram destruction? What survives records or doesn’t, leaves traces, ledgers or ghosts’ marginalia? It is a bleak and beautiful summoning, one that discovers/inscribes a world anew in testifying to the destruction of this one.” (Trish Salah) Born of Chinese immigrants, Chen is a Kundiman, Lambda, Callaloo and Watering Hole Fellow and a member of the Macondo and Voices of Our Nations Arts Foundations writing communities. A community organizer, they have worked in the Asian American communities of San Francisco, Oakland, Riverside and Boston, as well as helped organize the third national Asian Pacific American Spoken Word and Poetry Summit in Boston. Chen is also the co-editor of The Revolution Starts at Home: Confronting Intimate Violence Within Activist Communities (South End Press, 2011) and Here Is a Pen: an Anthology of West Coast Kundiman Poets (Achiote Press, 2009).

In Do Metaphors Dream of Literal Sleep? A Science-Fictional Representation of Theory (Harvard University Press, 2017) Seo-Young Chu blurs the line between the imaginary of science fiction and reality. Chu draws from poems, novels, music, films, visual pieces, and more in an exploration of the globalized world, cyberspace, war trauma, the Korean concept of han, and the rights of robots. “It conveys in vivid ways the tensions and dilemmas bound up with inhabiting a high-tech society that is growing ever more science-fictional.” (Peter Y. Paik, University of Wisconsin-Milwaukee). Chu is the author of the essay, “A Refuge for Jae-In Doe: Fugues in the Key of English Major” in ENTROPY and is Associate Professor of English at Queens College, CUNY. Chu also creates visual art using various media and is currently exploring themes of “the Korean DMZ, the strange duality of the Koreas, nostalgia, postmemory, han, injury, and how it feels to be Korean American.”

Mimi Mondal’s Luminescent Threads: Connections to Octavia E. Butler (Twelfth Planet Press, 2017), co-edited with Alexandra Pierce, collects first-person accounts of marginalized authors in the genre of science fiction and fantasy. Mondal is a Dalit speculative fiction writer and editor from India, whose own stories engage with identity, intersectionality, re-examining histories both personal and political, mythology as archetypes, and the varying rhetorics of love. She has been a Commonwealth Scholar at the University of Stirling, Scotland, UK, and an Octavia E. Butler Memorial Scholar at the Clarion West Writers Workshop. Luminescent Threads is currently nominated for a Hugo Award and a Locus Award in 2018, making Mondal the first Hugo Award nominee from India.