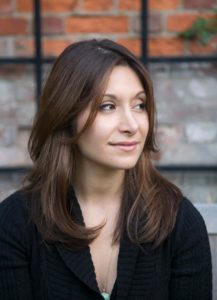 If you’re Asian American or an immigrant, you’ve probably wondered: what does it mean to search for home? Well, you (and your post-colonial melancholia) are invited to this special event about Middle East politics, revolution, and the refugee experience, You may have read Iranian-American novelist Dina Nayeri’s viral story in The Guardian (“The Ungrateful Refugee: We Have No Debt to Pay”). She’ll read her book Refuge (Riverhead, 2017), a powerful story of a daughter who leaves Iran but leaves her father behind. Syrian-American journalist Alia Malek returned to Damascus to live in her grandfather’s home—just as the Syrian conflict starts. She writes about it in The Home That Was Our Country: A Memoir of Syria (Nation Books, 2017). They’ll read with AAWW Margins Fellow Rami Karim, the author of lyric poems set against the Civil War in Lebanon. This mashup of poetry, fiction and memoir speaks to the complex nature of home: a place that elusively remains in flux through return and exile. Moderated by AAWW Muslim Community Fellow Roja Heydarpour.

Rami Karim is an artist and writer based in Brooklyn, who is currently working on stories, poems, and essays on diasporic life, beginning with a prose lyric set between 1970s Lebanon and present-day America. Their work has appeared or is forthcoming in Apogee, The Brooklyn Review, The Invisible Bear, and Peregrine, and their chapbook is Smile & Nod (Kaf/Wendy’s Subway, 2017). They teach writing at the City University of New York and are a 2017 Margins Fellow at the Asian American Writers’ Workshop.

Alia Malek’s The Home That Was Our Country: A Memoir of Syria (Nation Books, 2017) is an unexpected memoir of return that begins on a note of optimism. Malek, a journalist and civil rights lawyer, travels from Baltimore to her family’s ancestral home in Damascus, Syria, at the outbreak of the Arab Spring in order to reclaim her grandmother’s apartment, which was sacrificed during the beginning of Hafez al-Assad’s regime in the 1970s. Malek documents the history multi ethnic and religious families –Muslims, Christians, Jews, Armenians, and Kurds — who lived in the building, as Syria descends into civil war. The New York Times called the book “one of the finest examples of this new testimonial writing,” and journalist Anand Gopal raved, “The Syrian war is perhaps the most profound moral and political crisis of our era, and this unforgettable book will forever change it and the way you see the Middle East.” Alia’s reporting has appeared in the New York Times, Foreign Policy, The Nation, Christian Science Monitor, and others.

By all appearances, Niloo, the protagonist of Dina Nayeri’s novel, Return (Riverhead, 2017), is a successful 30-year old woman, who lives a cosmopolitan life with her French husband in the Netherlands. But as the onset global refugee crisis becomes more evident, Niloo’s past as an Iranian refugee increasingly alienates her from her community — and draws her back into her elusive relationship with her father in Iran. The New York Times writes that Nayeri captures how “reinvention may be a necessity for most exiles, but it doesn’t always come naturally; the new identity can graft roughly onto the old.” Nayeri, who was an Iranian refugee and now lives in Europe, is the author of A Teaspoon of Earth and Sea, which was translated into fourteen languages. She is graduate of the Iowa Writers’ Workshop and has received a National Endowment for the Arts grant, the O. Henry Prize, fellowships from the MacDowell Colony, Bogliasco Foundation, and several other artist residencies.

Roja Heydarpour is currently an Open City Fellow. Born in Iran and raised in New York City, she has worked for The Daily Beast, The New York Times, Al-Monitor, Columbia Global Reports, and Devex, among others. She also teaches citizenship classes at the Brooklyn Public Library. You can read her most recent piece about how Muslim-Americans mourn after the first generations of families die at Open City.

Searching for Home is a Brooklyn Book Festival Bookend event.