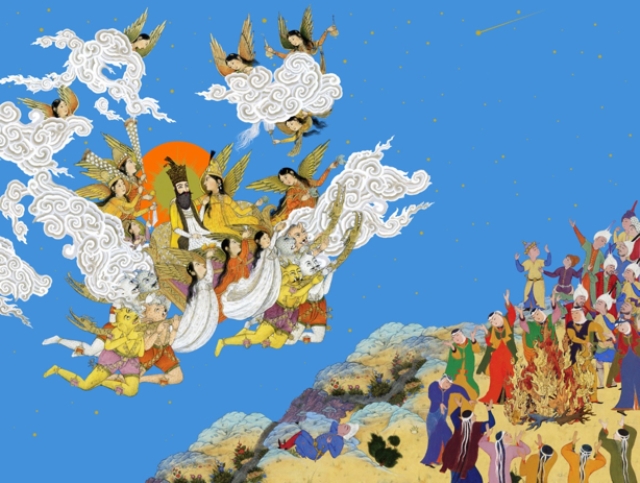 T.S. Eliot said that re-purposing myth was “a step toward making the modern world possible for art.” He didn’t know it could take forms as wondrous, colorful, and quirky as in the work of Porochista Khakpour and Hamid Rahmanian, who both updated tales from the Shahnameh, the Book of Kings. Khakpour’s contemporary epic The Last Illusion follows Zal, an albino thought cursed by his mother, from a cage in Tehran to the chaos of New York. Rahmanian’s illustrated Shahnameh was released to acclaim last year, a tremendous labor involving over 8,000 individual figures in 500 pages.

Porochista Khakpour is the author of the acclaimed 2007 novel Sons and Other Flammable Objects (Grove). A 2012 NEA fellow, her writing has appeared or is forthcoming in Harper’s, The New York Times, The Los Angeles Times, Slate, Salon, The Daily Beast, and many other publications around the world. Born in Iran and raised in Los Angeles, she currently resides in New York City where she teaches at Columbia and Fordham Universities.

Hamid Rahmanian is a filmmaker and graphic artist. He was educated in Tehran, Iran where he gained his B.F.A. in Graphic Design from Tehran University. He has been commissioned to do work for cultural organizations and commercial companies including The United Nations, GQ Magazine, Lincoln Center, Tribeca Film Institute, Pacifica Radio/Democracy Now!, Aramex, and Eurasia Foundation. He was recently awarded a Guggenheim Fellowship.

Image above: The Ascension of King Jamshid from Rahmanian’s Shahnameh, 2013.

Sponsored by The American Institute of Iranian Studies. Co-sponsored by ArteEast, NYU Department of Middle Eastern and Islamic Studies and NYU The Hagop Kevorkian Center for Near Eastern Studies.