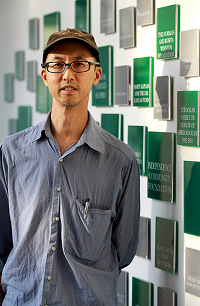 Join us for a night of ambient poetics with three experimental writers who probe the relationship between art-making and found technologies from parking garage reverberations to the neon glow of TV broadcasts. Treat your ears to Tan Lin’s Insomnia and the Aunt, Pamela Lu’s Ambient Parking Lot, and Sueyeun Juliette Lee’s Underground National. Williams College professor Dorothy Wang will moderate and Triple Canopy Editor, Lucy Ives, will live-blog the event at Montevidayo.

The recipient of a Getty Distinguished Scholar Grant and a Warhol Foundation Writing Grant, Tan Lin is the author of Seven Controlled Vocabularies, lauded by Warren Liu as “an utterly, compellingly boring film–I’ve already forgotten it in the best way unimaginable.” In Tan Lin’s latest work, Insomnia and the Aunt, a young man’s memories of visiting his Chinese aunt at her motel, recalled almost as if written by their TV set. The aunt’s memory ghosts her nephew’s television screen, their shared past-time. The aunt “resembles the biography of a dead person where the dead person has somehow forgotten to die. She speaks casually, like the speech of a language without a speaker.” Lin’s experimental novella is indexed by photographs, postcards, and the indicia to an imaginary novel, mimicking the seamless repetition and reproducibility of images on the television. In Lin’s beautiful and wonderfully odd elegy, technology acts as an emotive transmitter engaging the two relatives in erotic simulacra.

Pamela Lu’s Ambient Parking Lot profiles a noise music band’s search for the ultimate ambient sound and is the follow-up to Pamela: A Novel, an experimental poetry classic and one of SPD’s bestselling books of the 2000’s. They sample revving engines, the parking habits of the rich and famous, and commercial parking spaces. Reading Ambient Parking Lot is comparable to “watching an indie webisode spin-off of ‘Behind the Music,’ as Lu tracks the Ambient Parkers’ absolute mediocrity “in awkwardly-awesome crescendos and geeky-fantastic loops,” says Jai Arun Ravine of Lantern Review Blog.

The author of That Gorgeous Feeling and Underground National, Sueyeun Juliette Lee could be the only poet to write about U.S. intervention in Korea and the dating patterns of K-pop stars. Sueyeun is a transnational collagist who perverts found documents and replaces fixed histories of square footage, geographic boundaries, and global affairs editorials with erasure. In her second book of poetry, Underground National, Lee remixes celebrity suicides, tourism trends, and web splices to put forth a subterranean account of Korean culture.

Dorothy Wang is an assistant professor in the American Studies Program and faculty affiliate in the Department of English at Williams College. Her book, Thinking Its Presence: Form, Race, and Subjectivity in Contemporary Asian American Poetry, is forthcoming from Stanford University Press.

Lucy Ives is a Triple Canopy senior editor and the author of Anamnesis. She lives in New York City, where she is a PhD candidate in comparative literature at NYU.

This event is co-sponsored by The Poetry Project.