The Sweat of Love & the Fire of Truth: A Conversation
Akwaeke Emezi, Elizabeth Acevedo, & Sophia Hussain 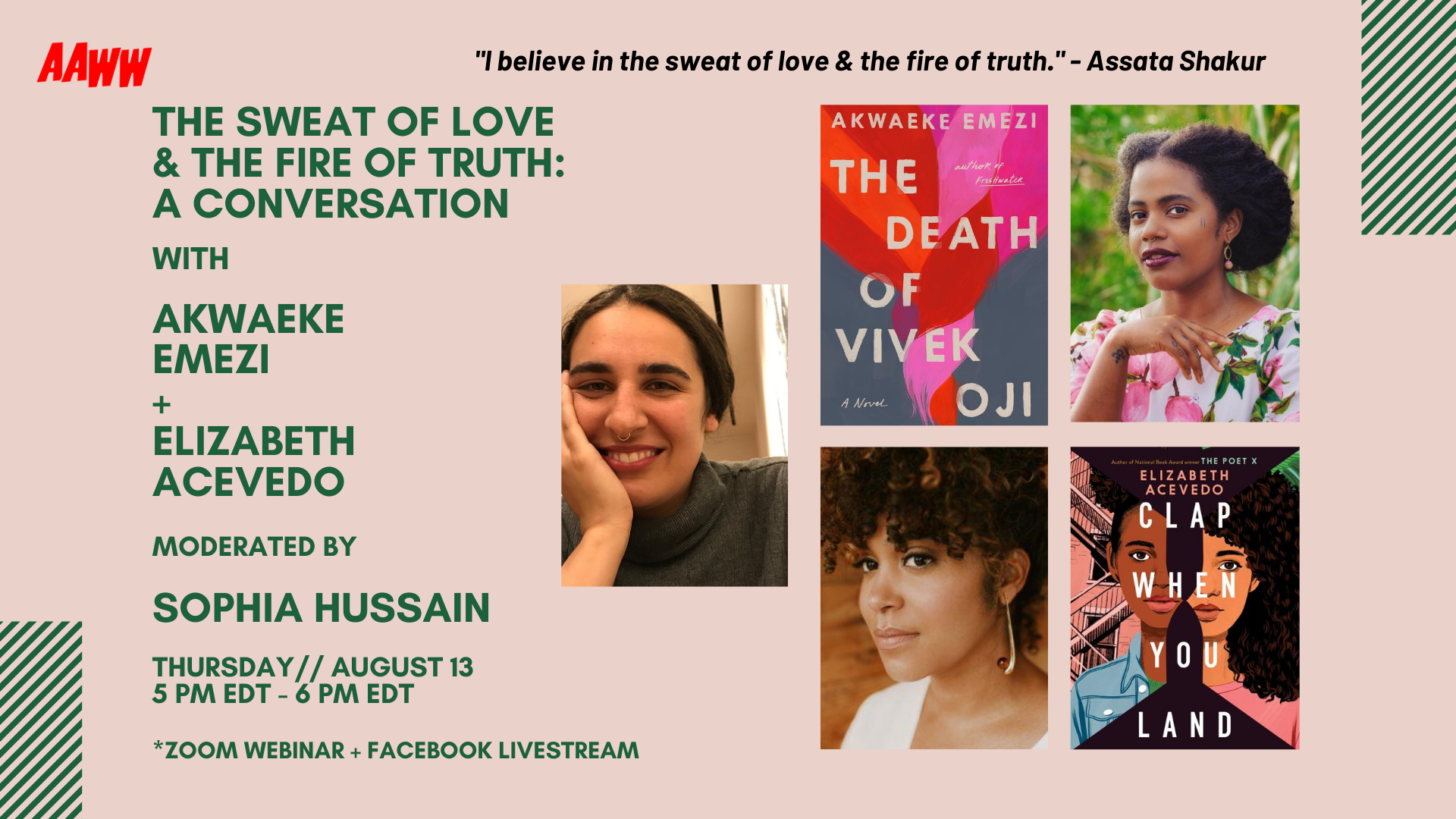 **This event will be offered as a Zoom Webinar (seat occupancy of 100) with a Facebook Livestream for overflow.**

“I believe in the sweat of love & the fire of truth.” – Assata Shakur

The Asian American Writers’ Workshop is thrilled to celebrate the launch of Akwaeke Emezi’s new book THE DEATH OF VIVEK OJI and the recent release of Elizabeth Acevedo’s CLAP WHEN YOU LAND and WRITE YOURSELF A LANTERN: A JOURNAL INSPIRED BY THE POET X.  Join us for this conversation with award-winning writers and world-shifters Emezi and Acevedo on August 13 at 5 PM EDT.

Already lauded as one of the best books of the year, THE DEATH OF VIVEK OJI by Akwaeke Emezi is a unfolding mystery. “Emezi offers a richly textured depiction of a middle-class community in Nigeria” (Kirkus Review). Propulsively readable, THE DEATH OF VIVEK OJI is a novel about family & friendships that challenge expectations. A dramatic story of loss, transcendence, and inter-connection, this latest from Emezi is, as Elle writes, “a testament to Emezi’s literary prowess.” (Elle)

Elizabeth Acevedo’s new CLAP WHEN YOU LAND is a novel-in-verse. Brimming with grief and love, Acevedo writes about the devastation of loss, the difficulty of forgiveness, and the bittersweet bonds that shape our lives. Of CLAP WHEN YOU LAND. “Acevedo maintains her signature poetic style, capturing the raw emotions of both teens who … are in disbelief about their father Yano’s death.” (Remezcla)  Acevedo has also just published WRITE YOURSELF A LANTERN: A JOURNAL INSPIRED BY THE POET X,  a diary for dreamers, world builders, and poets meant to hold space for writing the words writers need most.

Akwaeke Emezi is the author of the novel FRESHWATER, which was named a New York Times Notable Book and shortlisted for the PEN/Hemingway Award, the NYPL Young Lions Fiction Award, the Lambda Literary Award, and the Center for Fiction’s First Novel Prize, and longlisted for the International Dublin Literary Award, the Women’s Prize for Fiction, the Andrew Carnegie Medal for Excellence in Fiction, the Brooklyn Public Library Literary Prize, the Wellcome Book Prize, the Aspen Words Literary Prize, and the VCU Cabell First Novelist Award. Freshwater was also named a Best Book of the Decade by BuzzFeed and a Best Book of the Year by The New Yorker, NPR, and the Chicago Public Library. Emezi’s second book, PET, was a finalist for the National Book Award for Young People’s Literature. Selected as a 5 Under 35 honoree by the National Book Foundation, Emezi has been profiled by Vogue (for which they were photographed by Annie Leibovitz) and by Vanity Fair as part of “The New Hollywood Guard.” FRESHWATER has been translated into ten languages and is currently in development as a TV series at FX, with Emezi writing and executive producing with Tamara P. Carter.

Elizabeth Acevedo’s poems have been published or are forthcoming in Poetry, Puerto Del Sol, Callaloo, Poet Lore, The Notre Dame Review, and others. Acevedo is a Cave Canem Fellow, Cantomundo Fellow, and participant of the Callaloo Writers’ Workshop. She’s given TedTalks and has been a featured reader nationally and internationally, including appearances at renowned venues such as The Lincoln Center, Madison Square Garden, the Kennedy Center of the Performing Arts, South Africa’s State Theatre, The Bozar in Brussels, the National Library of Kosovo and many others. Acevedo holds a BA in Performing Arts from The George Washington University and an MFA in Creative Writing from the University of Maryland. She resides in Washington, DC with her husband.

Sophia Hussain is a writer and events programmer based in the Bay Area, on unceded Ohlone lands. She is currently the events coordinator at the Berkeley Center for New Media, where she is collaborating on an event series about Indigenous Technologies and a mini-series on fandom and piracy. Outside of event planning, she is part of a childcare collective and a tenants’ rights hotline. Previously, she was the Programs Coordinator at AAWW, after having been a longtime fan and frequent presence in the standing room only section of the event space.

The Sweat of Love & the Fire of Truth: A Conversation