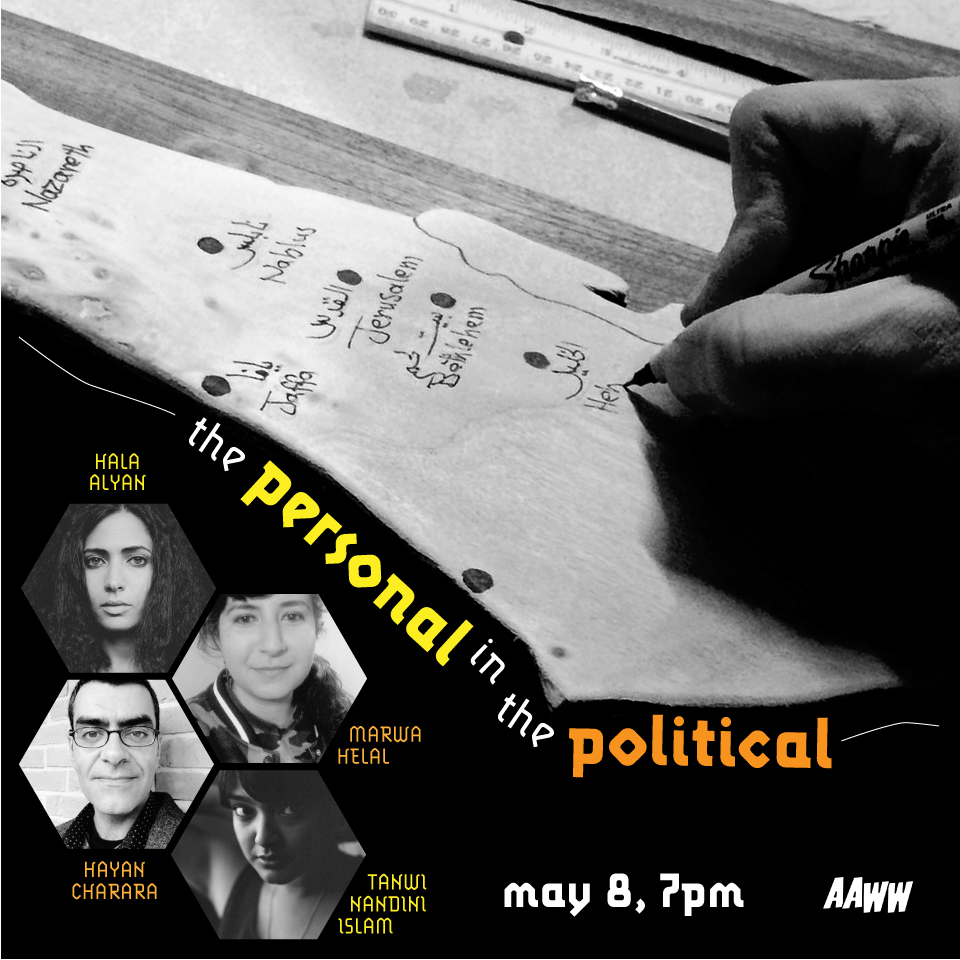 Join us for a special evening featuring three Arab American writers exploring the boundaries between personal and political: novelist/poet Hala Alyan and poets Hayan Charara and Marwa Helal. From the Six-Day War and the invasion of Iraq to explosive poetic experimentations, these writers explore what it means to have a private self, a family space, and a home in the conditions of war, displacement, and migration. They’ll speak with novelist and former AAWW Open City Fellow Tanwi Nandini Islam. Co-sponsored with Radius of Arab American Writers, Turning Point for Women and Families, and Alwan for the Arts!

In Hala Alyan’s novel Salt Houses (Houghton Mifflin Harcourt 2017), a six-decade-spanning multigenerational Palestinian novel, Salma reads her soon-to-be-married daughter Alia’s future in a cup of coffee grounds. She sees their family’s future: being uprooted in the Six-Day War of 1967, leaving their home in Nablus, and Alia moving to Kuwait, which is soon invaded by Saddam Hussein in 1990. As Alia and her family lose their home, the novel spans Beirut, Paris, and Boston and tells a lyrical story of refugee displacement, assimilation, and migration. (Alyan has named Jhumpa Lahiri and Amy Tan as influences.) Novelist Ru Freeman writes: “Salt Houses is a piercingly elegant novel that registers Palestine with deep resonance for what it is: a once beloved home, known, lost, and re-imagined into life. A place where families decide between security and happiness, religion and heritage, where war is constant, yet peace is found. In the exquisite prose of a poet, Hala Alyan shows how we carry our origins in our hearts wherever we may roam, and how that history is calibrated by the places we choose to put down roots. This is a book with the power to both break and mend your heart.” Alyan also wrote three poetry collections: Atrium (Three Rooms Press 2012), an Arab American Book Award winner; Four Cities (Black Lawrence Press 2015), an exploration of global spaces like Gaza, Ramallah, Haifa, Beirut, Tripoli, Baghdad, Detroit, Paris, and Brooklyn; and the Crab Orchard-winning Hijra (Southern Illinois University Press August 2016)–the latter two of which we celebrated in our space. Read her poems in AAWW’s The Margins here.

Poet and journalist Marwa Helal is working on a project that incorporates writing, photographs and dreams to explore the failed US immigration system through human stories of immigrants who have struggled to gain citizenship. She is the author of I AM MADE TO LEAVE I AM MADE TO RETURN (No,Dear/Small Anchor Press, 2017) and Invasive species (Nightboat Books, 2019). Born in Al Mansurah, Egypt, she is the recipient of fellowships from Poets House, Brooklyn Poets, and Cave Canem. As Bhanu Kapil wrote, when judging Marwa the winner of Bomb’s poetry contest, “Displacement, trauma, and the desire for cultural and institutional revenge happen simultaneously in these poems. Helal has given us poems that speak, obey something beyond the page, and scream. In these visceral and deeply political poems, she is dreaming a radical modernity, marking the raw bits of love, community and loss when and as they come.” Read her poems “The Middle East is Missing” and “Poem to be Read from Right to Left.”

Hayan Charara’s tragic, loving new poetry collection Something Sinister (Carnegie Mellon 2016) explores the conflict between the personal and political, cultural and aesthetic–from domestic violence to the war in Iraq, from losing one’s parent to the rupture on language borne by the War on Terror. Praising the book’s “fearless love” and “expansively tender vision,” Fady Joudah lauded Something Sinister for the way it connected “the deeply private in American poetry” to “the immensely public at the world stage.” And as one reviewer writes of the book’s opening poem, “Being Muslim”: “The title would seem to embrace the role of speaking on behalf of a collective identity, a role that contemporary politics thrusts upon someone who is, for example, a Muslim and Arab and American in the age of the “forever wars” or the “war on terror,” terms that have served to mask the racism of the violence they name. Yet having assumed the mantle of collective identity, the poem offers the personal, the intimately known.” Born in Detroit to Arab immigrants, Hayan is the author of The Sadness of Others (Carnegie Mellon 2006), and The Alchemist’s Diary (Hanging Loose 2001). His New Voices Award-winning children’s book The Three Lucys (Lee & Low 2016) explores his family’s experience of war in Lebanon. An NEA Fellow, he edited Inclined to Speak (University of Arkansas Press 2008), an anthology of contemporary Arab American poetry.

Tanwi Nandini Islam is the author of Bright Lines (Penguin 2015), the story of the Bangladeshi Saleem family and their return to Bangladesh, where they must confront the demons of their past alongside the ones of the present. The book was a finalist for the Center for Fiction’s First Novel Prize. She is the founder of Hi Wildflower Botanica and served as an Open City Fellow for the Asian American Writers’ Workshop, where she wrote about a South Asian women’s coop and interviewed novelist Nayomi Munaweera.

The Personal in the Political